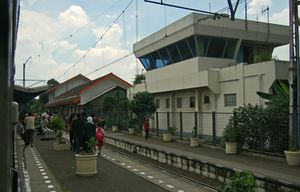 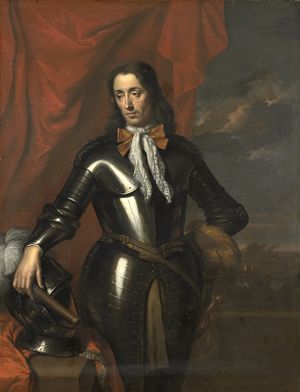 Isaac de l'Ostal de Saint-Martin attributed to Jan de Baen, the landlord of several areas in Java, including Kemayoran in what is now Jakarta.

Even though the area that was known as Batavia stretches from Tangerang to Bogor, physical development is still limited to the area near the city center around the Sunda Kelapa harbor area. Limitations of this development is partly due to the condition of Batavia being a walled city with fortifications because of many attacks from local Sultanates to seize Batavia, as well as because of the centralized system of the government. Only in 1810 that the city wall of Batavia was demolished, during the reign of Daendels. Meanwhile, rural areas and suburbs of Batavia are still largely 'untouched' with several native villages. These rural areas were later shared to several landlords, one of which is the area that is now known as Kemayoran.[1]

The area that was known as Kemayoran was formerly a land owned by the Dutch East India Company (VOC) commander, Isaac de l'Ostal de Saint-Martin (ca 1629–96). At the end of the 17th century, Isaac owned a large area in Java,[citation needed] which includes the area that is now Kemayoran, part of Ancol, Krukut at Tegalangus, and Cinere. Isaac held the title major, which is where the name Kemayoran come from. The name Mayoran first appears in Java Government Gazette on February 24, 1816, described as "a land close to Weltevreden". Later, the area was known as Kemayoran until now.[2]

At first, the inhabitants of Kemayoran are a native from a mixture of several ethnic group from the local kingdom of Pajajaran, Demak, Mataram, and several foreign nations who arrived as immigrants. After the Dutch occupied, there are immigrants from China, India, Sumatra, and East Indonesia that are used as workers for the expansion and development of Batavia or to participate in military service against Sultan Hasanuddin and Sultan Agung of Mataram.[1]

Under the government of Daendels, in order to collect funds for the construction of the new Anyer-Panarukan road, some lands were sold to private owners. Generally, the buyers are Dutch, Chinese and Arabic origin. Among them is Roosendaal, H. Hussein Madani (Indo-Dutch), Abdullah, and De Groof. These landlords have the power to regulate land from users, who are indigenous population and serf. After slavery was abolished, these people became a farmer that works for the landlords, the landlords will determine the taxes to be paid.[1]

Until 1903, Batavia moved to a decentralized form of government, which marked the period of modern colonialism of Batavia. Many lands are repaired, canals are constructed, and the city is expanded. Lands are purchased for the expansion of the city, which included the settlements of Kemayoran, Petojo, Jatibaru, Cideng, Kramat, and Tanah Tinggi. These lands were allocated for lower-middle-class people. More affluent citizens such as the Dutch people and other higher class people live closer to the center, such as in the Menteng residential area.[1]

Many of the people who resides in Kemayoran were Indo people (mixed Dutch and Indonesian). Most of them lived in Jl. Garuda. Even after the Second World War, many former Dutch soldiers settled in Kemayoran. Around the 1930s, Kemayoran was known as a settlement of the Indo people, arrising a new nickname for Kemayoran, "Belanda Kemayoran" (roughly translated as Kemayoran Netherlands). After Indonesian independence, a wave of urban migrants arrived in Kemayoran and Jakarta from various regions in Indonesia such as West Java, Central Java, Sumatra, Kalimantan, East Nusa Tenggara, and West Nusa Tenggara. Kemayoran transformed into a more crowded settlements.[1] 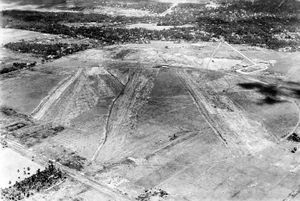 The construction of Kemayoran Airport in Kemayoran.

In 1935, Kemayoran Airport was opened. This changed the economy of Kemayoran from agriculture to service, but also caused less urban development in Kemayoran (tall buildings are not allowed in Kemayoran). Although Kemayoran is located close to downtown Jakarta (around what is now known as Merdeka Square, Gambir Subdistrict), there are no significant economic center in Kemayoran. In addition, the development of plan of Jakarta was more weighted toward the south of downtown Jakarta. Until the mid 1980s, the area of Kemayoran was still a sparsely distributed settlements with vacant lands. The way Kemayoran area was kept away from developments caused several indigenous culture to stay undisturbed in Kemayoran. Even now, the Betawi culture, the local culture of Jakarta, is often identified with the Kemayoran area.[1]

In 1986, Kemayoran airport was officially closed. The area that was formerly an airport was gradually turned into other developments such as Pekan Raya Jakarta and Kotabaru Kemayoran Bandar Kemayoran (both of these were actually located in Pademangan Subdistrict in North Jakarta instead of Kemayoran Subdistrict in Central Jakarta. Without the airport, highrises started to be constructed in Kemayoran. These changes transform Kemayoran into a more metropolitan city. Consequently, cultural values such as the Betawi Culture is threatened.[1] 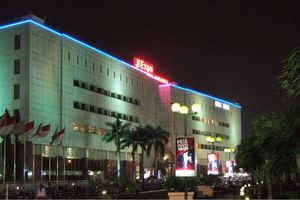 Jakarta International Expo Kemayoran main building is actually located in Sawah Besar Subdistrict, but is associated with Kemayoran Subdistrict due to its location in the former area of the historic Kemayoran city, and its close proximity with Kemayoran.

Many ingenious culture, especially the Betawi culture, flourished in Kemayoran. Among them is the kroncong music, a mixture of indigenous music and Portuguese fado music. Kroncong Tugu, a variation of kroncong that originally came from Tugu (about 12 km east of present Jakarta), is a variation that is closely associated with Kemayoran.

Gambang music also developed in Kemayoran under the influence of China. The variation of gambang that developed in Kemayoran is often called Gambang Kemayoran and it is not referred to as Gambang Kromong because the kromong (a kind of percussion) is not used. Songs that are popular at the time including Onde-onde, Si Jongkong Kopyor, and Kapal Karem.

The Wayang Kulit of Kemayoran originates from Javanese influences. The main difference is that the language used is the Betawi language instead of Javanese language. During the colonial era, Wayang Kulit was usually performed at ceremonies such as wedding ceremony, circumcision ceremony, and New Year party.

One of the popular artist associated with Kemayoran theater is Benyamin Sueb.

Pencak silat, a martial art of the Betawi people, also flourished in Kemayoran. Branch of pencak silat what is developed in Kemayoran is Beksi, Dingkrik, Si tembak, Sin lam ba, and Kolong meja. Until late 80's, it is a common routine for children to practice pencak silat after the Isha prayers.

During the 1990s, many of the traditional art and culture of Betawi characteristic of Kemayoran slowly disappeared.

There are many folklore associated with Kemayoran area, usually involving the conflict between the indigenous people of Kemayoran and the Dutch kompeni (local term for Dutch East India Company (VOC)) who applied huge taxes to the local people. One of the popular hero from the legend is Murtado "Si Macan Kemayoran" ("the Kemayoran Tiger") who protected the Kemayoran village area against the VOC henchmen and the local bully who oppressed the villagers.

Government agencies with head offices in Kemayoran include the National Search and Rescue Agency.[3]

The subdistrict of Kemayoran is divided into eight Kelurahan (Administrative Villages):