Kennesaw is a city in Cobb County, Georgia, United States, located in the greater Atlanta metropolitan area. It had a population of 29,783 according to the 2010 census.[3] Founded in 1887, Kennesaw has a past surrounded with railroad history. During the Civil War, Kennesaw was the staging ground for the Great Locomotive Chase on April 12, 1862.

In 2007, the city was selected by Family Circle magazine as one of the nation's "10 best towns for families".[4] In 2009 Newsmax magazine listed the city among the "Top 25 Most Uniquely American Cities and Towns".[5] The city is perhaps best known nationally for its mandatory gun-possession ordinance.[6]

As the Western and Atlantic Railroad was being built in the late 1830s, shanties arose to house the workers. These were near a big spring. A grade up from the Etowah River became known as "the big grade to the shanties", then "Big Shanty Grade", and finally "Big Shanty".[7]

The name "Kennesaw" is derived from the Cherokee word gah-nee-sah, meaning cemetery or burial ground.[8]

Civil War and after

During the Civil War, Big Shanty was the site of major fighting in the Battle of Kennesaw Mountain, part of the larger Atlanta Campaign. Kennesaw Mountain National Battlefield Park,[10] located southeast of the city limits, now contains many of these historic areas, though much of the surrounding land has been developed, and some buried artifacts have been taken by people with metal detectors.

L.C. Chalker purchased a 1.25-acre (0.51 ha) tract of land adjacent to the Kennesaw Cemetery from J.W. Ellis in 1934, which was sold for burial purposes. Chalker purchased another 1 acre (0.40 ha) adjacent to the first parcel in 1948, which was also to be used for a cemetery. The Chalker family managed these portions of the cemetery until they were sold to the City of Kennesaw in the mid 1950s. The earliest known burial is the infant Lucius B. Summers, who was interred in 1863. Other grave markers date as far back as the 1860s to the 1890s. Civil War veterans are buried here. The cemetery is still in use.

The Southern Museum of Civil War and Locomotive History[11] is located downtown, next to the Western and Atlantic Railroad tracks on Cherokee Street, just off Main Street (old U.S. 41 and State Route 3). The museum is the current preservation and display location for The General, the locomotive that played the key role in the Great Locomotive Chase (The Texas which chased it is at the Atlanta Cyclorama).

Kennesaw is located in northwestern Cobb County, bordered by the city of Acworth to the northwest. Kennesaw Mountain is located southeast of the city limits in the battlefield park. Its summit is the highest point in the Atlanta metro area, at an elevation of 1,808 feet (551 m) above sea level. The city was renamed for the mountain.

There were 11,413 households out of which 38.1% had children under the age of 18 living with them, 45.0% were married couples living together, 15.2% had a female householder with no husband present, and 35.4% were non-families. 26.8% of all households were made up of individuals and 6.4% had someone living alone who was 65 years of age or older. The average household size was 2.59 and the average family size was 3.19.

Several festivals are held annually. Every April the annual Big Shanty Festival displays over 200 arts and crafts booths along with 20 food booths downtown. Over 60,000 people from around North Georgia attend the festival. A parade starts the festival.[16][17]

The city hall[18] is located downtown, just off Main Street (old U.S. 41 and State Route 3, later State Route 293). It contains the offices of mayor and city council, the city jail in the basement, and a small 9-1-1 call center and other offices. It is the public-safety answering point for the city of Kennesaw and the neighboring city of Acworth, and dispatches the separate police departments of both cities. Calls for fire services are relayed to and dispatched from Cobb County's 911 center,[19] and serviced by the Cobb County Fire Department, as neither city has its own fire department.

In 2008, the city of Kennesaw awarded a bid to Digitel Wireless for the implementation of city wireless Internet. In March 2008, the city of Kennesaw announced the grand opening of four new wireless areas: Swift-Cantrell Park and Adams Park, and the train depot area across from the Southern Museum of Civil War and Locomotive History. The city has also provided Wi-Fi in the Ben Robertson Community Center.[20]

In 2001, violent crime rates were about 85% below national and state rates. Property crime rates were from 46-56% below national and state rates. From 1999 to 2011, Kennesaw crime statistics reported that both property and violent crimes had decreased, though from 2003 to 2008 the trend in both violent and property crime rates slightly increased.[21] The increase in crime rate overall is attributed to the population growth rate of 37.41%. The population growth rate is much higher than the state average rate of 18.34% and is much higher than the national average rate of 9.71%.[22]

The town is noted for its unusual gun legislation in response to Morton Grove, Illinois' law mandating gun prohibition. In 1982 the city passed an ordinance [Sec 34-21][23] 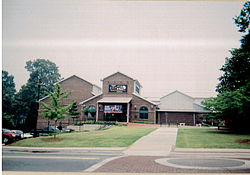 Kennesaw State University is located in the city and is part of the University System of Georgia.