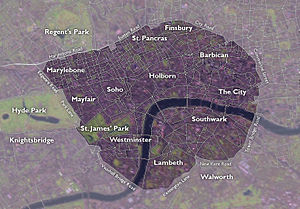 The congestion charge employed to apply to drivers within the London Inner Ring Road.

The London Inner Ring Road is a 12-mile (19 km) route formed from a number of major roads that encircle Central London.[1] The ring road forms the boundary of the London congestion charge zone, although the ring road itself is not part of the zone.

The route is described as the "Inner" Ring Road because there are two further sets of roads that have been described as London ring roads. The North and South Circular Roads together form the second ring road around London, averaging 10–15 miles (16–24 km) in diameter. The M25 motorway is the outermost road encircling the metropolis, at an average diameter of 40–50 miles (64–80 km).

Plans for an Inner Ring Road were put forward by Patrick Abercrombie[3] in the 1940s,[4] in the County of London Plan. 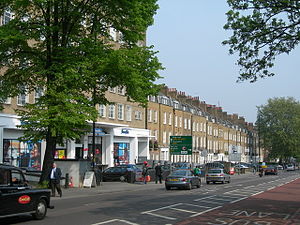 City Road, part of the Ring Road. The green sign indicates that traffic should head straight on to remain on the Ring Road towards Shoreditch.

The route is signed as "Ring Road" and is made up of the following roads:

Construction of the New Road from Paddington to Islington began in 1756[6] to relieve congestion in the built-up area of London. At that time the districts of Marylebone, Fitzrovia and Bloomsbury were on the northern edge of the city, and only the southern parts of them had been built up. The New Road ran through the fields to the north of these three neighbourhoods.

The road is now one of the busiest main roads in the city. It runs from Edgware Road in the west to Angel, in the east. After being renamed in 1857, the western section between Edgware Road and Great Portland Street is known as Marylebone Road, the central section between Great Portland Street and King's Cross is known as Euston Road,[7] and the eastern section from King's Cross to The Angel is called Pentonville Road.

City Road was constructed in 1761 to continue the route eastwards to the northern edge of the City of London.[8]

There are several halls of residence located on Pentonville Road, these being Dinwiddy House (SOAS), Paul Robeson House and Nido Student Living. There are two green spaces along the road – Joseph Grimaldi Park and Claremont Square, the latter however is not open to the public.

This street is distinguished by the "set back" housing lines originally intended to provide an atmosphere of spaciousness along the thoroughfare. It is one of the locations on the UK version of the Monopoly board game, which features areas native to London.

Pentonville Road is one of the many London placenames mentioned the song "Transmetropolitan" by The Pogues.

Mansell Street is a short road, part of the A1210 route (though sometimes shown as being the A1211), which for most of its length marks the boundary between the City of London and the London Borough of Tower Hamlets, though the southernmost part is entirely in Tower Hamlets. It runs from Aldgate southwards to the Tower of London. The northern part, north of the junction with Goodmans Yard and Prescot Street, has one way northbound traffic, while the southern part has one way southbound traffic. 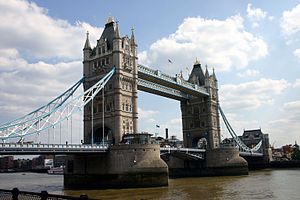 Tower Bridge Road is a road in Bermondsey in the London Borough of Southwark, UK, that runs north to south, and connects the Bricklayers' Arms roundabout and flyover at its southern end (New Kent Road and Old Kent Road) to Tower Bridge and across the River Thames at its northern end. It also links to Long Lane.

The road has an abundance of antique (or junk) shops along part of its length. There is also Bermondsey Square which holds an 'antique' market every Friday morning, usually known as Bermondsey Market, though officially as New Caledonian Market.

Towards its southern end are a collection of shops, pubs and takeaways.

Kennington Lane is an A-road (classified A3204) running between the Elephant & Castle to the east and Vauxhall to the west.

Starting at the Elephant, Kennington Lane splits off from the A3 by means of a Y-junction, where Newington Butts becomes Kennington Park Road. Heading in a southwesterly direction, the road then crosses the A23 Kennington Road, before reaching the Vauxhall one-way system, where the A3036 Albert Embankment and Wandsworth Road, A202 Vauxhall Bridge, Durham Street and Harleyford Road, A203 South Lambeth Road, and A3205 Nine Elms Lane all converge. 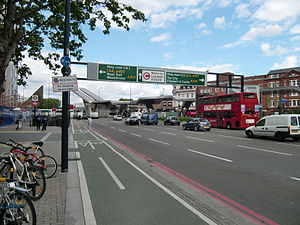 Vauxhall Bridge Road runs south-east to north-west from Vauxhall Cross, over the River Thames to Victoria station. At the southernmost point the road runs past the headquarters of MI6. The section immediately after Vauxhall Bridge north of the Thames is called Bessborough Gardens and is home to the Embassy of Lithuania.[10] Further along is the Embassy of Mauritania.[10]