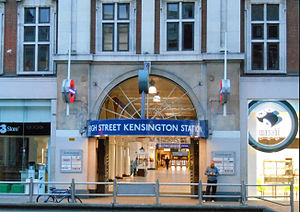 The main entrance to Kensington Arcade

In August 2000 it was revealed that MEPC plc was planning to sell its shopping centres, including Kensington Arcade, so the money can be reinvested in its business parks in South East England.[2] It was expected to sell for £100 million.[2]