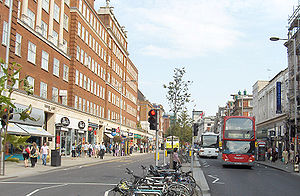 Kensington High Street is the main shopping street in Kensington, London. The area is identified in the London Plan as one of 35 major centres in Greater London.[1]

Kensington High Street is one of western London's most popular shopping streets, with upmarket shops serving a wealthy area. From the late 19th century until the mid-1970s the street had three classic department stores: Barkers of Kensington, Derry & Toms and Pontings. Barkers bought Pontings in 1906 and Derry & Toms in 1920, but continued to run all three as separate entities. In a big building project which started in 1930 and was not complete until 1958 (the Second World War halted the project), the company made Derry & Toms and Barkers into Art Deco palaces. On top of Derry & Toms, Europe's largest roof garden area (1.5 acres (6,100 m2)) was created, consisting of three different gardens with 500 species of plants, fountains, a stream, duck, flamingos and a restaurant - said to serve the best high tea in Kensington.

Part of the Barker premises has now been taken over by American Whole Foods Market, which has opened the UK's first organic superstore there in June 2007.[3] The rest was added to existing office space used by the headquarters of Associated Newspapers.

Kensington High Street was also the site of Biba in the 1960s and early 1970s. When Derry & Toms closed, the iconic store took the building and accentuated its Art Deco style further. But the 1970s recession, coupled with idealistic business ideas, killed Biba in 1975. The Derry & Toms roof gardens still remain, now known as the Kensington Roof Gardens and owned since 1981 by Richard Branson's Virgin.

Kensington High Street's future as a shopping street has been threatened by the large Westfield London, which opened a short distance away in Shepherd's Bush in late 2008. However, these factors may be offset to some extent - or even outweighed - by recent changes to the road layout, intended to make the street a more pleasant place to shop. The Royal Borough of Kensington and Chelsea decided to experiment with the concept of shared space, which deputy leader Daniel Moylan had studied abroad. Railings and pedestrian crossings were removed, thereby enabling pedestrians to cross the street wherever they choose. Bicycle racks were placed on the central reservation. The effect over two years was a dramatic cut in accidents, down 44% against a London average of 17%.[4]

Kensington High Street is also home to a large part of the British music industry, with the UK offices of major labels such as Universal Music Group, Sony Music, Warner Music Group and EMI all situated in the area. The only Bristol Cars dealership in all of the UK is located on this street as well.

It is also the site of the former Roman Catholic Pro-Cathedral of England, Our Lady of Victories, now a parish church; Kensington Arcade; and a building housing the Consulate of Romania and the Embassy of Paraguay.[5]