Kent County is a county located in the U.S. state of Maryland. As of the 2010 census, its population was 20,197,[1] making it the least populous county in Maryland. Its county seat is Chestertown.[2] The county was named for the county of Kent in England.[3] The county is located on Maryland's Eastern Shore.

In 1642, the governor and council appointed commissioners for the Isle and County of Kent. This act appears to have led to the establishment of Kent County. In 1675, the first county seat was New Yarmouth. The seat was briefly moved upriver to Quaker Neck, and then to the site of modern Chestertown. Before the American Revolution New Town on Chester, now Chestertown, was a port entry for the counties of Cecil, Kent, and Queen Anne's.[4]

The county has a number of properties which are listed on the National Register of Historic Places.[5]

In 1793, the county had its first newspaper, called Apollo, or Chestertown Spy. It was succeeded by local papers such as the Chestertown Gazette.

Washington College, the oldest college in Maryland, is located in Kent County.

The Sheriff of Kent County is John Price IV.

According to the Maryland Geological Survey, the highest point in Kent County is 102 ft above sea level, approximately 2.25 mi west of Coleman's Corner (shown on maps as "Coleman"), just northeast of the mouth of Still Pond Creek.[8]

Kent County is the smallest county in Maryland. It has a 209-mile shoreline, including Eastern Neck Island. The Chesapeake Bay is on the west, Sassafras River on the north, and the Chester River on the south. The eastern border with Delaware is part of the Mason–Dixon line. 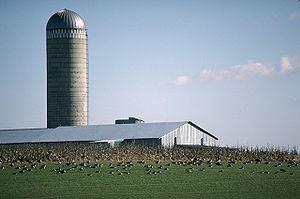 A farm in Kent County, Maryland

Other unincorporated places not listed as Census-Designated Places but known in the area include: