Following the 2015 elections, the Kentucky Democrats will control the minority of the executive offices, including the Kentucky House of Representatives which is led by Speaker of the House Greg Stumbo. Following the 2015 statewide elections, the party lost the executive offices of the Treasurer and Auditor and only narrowly managed to hold the offices of Secretary of State and Attorney General. The Party also lost the Governor's office. Unlike the national party, which uses a donkey, the state party has a rooster as its mascot.

The structure of the Kentucky Democratic Party states that the power rests in the hands of the members and is to be conducted in accordance with the Constitutions of the United States and the Commonwealth of Kentucky. A member is anyone who is registered as a Democrat in the commonwealth of Kentucky, and states that no discrimination will take part in anyone wishing to join the party.

Governing of the Kentucky Democratic Party articulates that proxy votes are not permitted and unit rules are forbidden. The organization aims to take strong stances against forcing members to vote a certain way, but instead endorses all candidates which meet their ideological structure most effectively.

A major function of the party is precincts and elections. The party conducts and carries out effective nominations for various elections. Members of each precinct must select one man, one woman, and one youth to represent their precinct. One member is then selected as the Precinct Chair. Removal from the Precinct Committee can result from the failure to support the nominees of the National or Kentucky Democratic Party.[1] 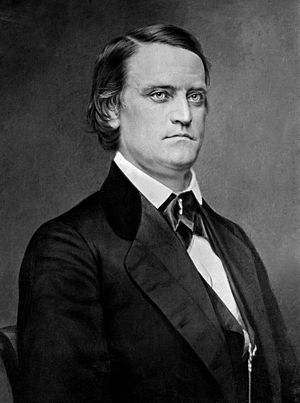 Kentucky politics has been relatively evenly matched between Democrats and Republicans. There has been no Democratic President from Kentucky, but there have been three Democratic Vice Presidents from the state. The first Vice President from Kentucky, Richard M. Johnson, was the ninth Vice President of the United States. In the earliest part of the 19th century Johnson was a supporter of the Democratic-Republican Party during his service in the U.S. House, Johnson would work to secure pensions for widows and orphans of wars, in particular those following the War of 1812, a stance that would set precedence for future Kentucky Democrats.[2] Johnson would later become a strong supporter and influence in the Democratic Party along with his service in the White House from 1837-1840.[3] John C. Breckinridge served as the 14th Vice President (1857–1861) and a notable figure in the early Democratic Party of Kentucky, although Breckinridge claimed himself not an anti-union demonstrator, during the civil war, yet strongly supported the states right to determine slavery and would go on to be an officer in the confederate army.[4] Alben W. Barkley Vice President (1949–1953) began his Kentucky Democratic influence as a county Judge, and would become a U.S. House of Representatives and go onto the U.S. Senate with strong ties to Woodrow Wilson's liberal agenda also during Franklin D Roosevelt's Administration and would help transition Kentucky's Democratic Party into the modern era of politics.[5] Since the 20th century and early part of the 21st century Democrats have largely dominated the office of Governor in the State of Kentucky, out of twenty six Governors since 1900, only seven have not conducted office within the Democratic party.[6] 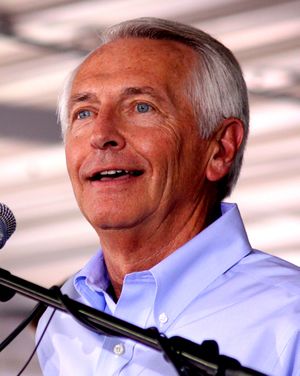 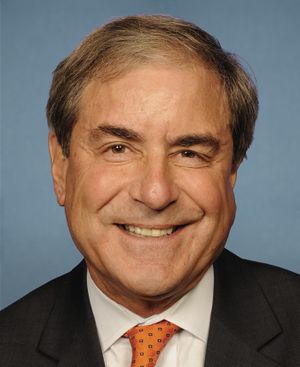 The Democratic Party has been working to ensure health coverage for every American citizen since the turn of the 20th century.[10] The Democratic Party of Kentucky supports the Affordable Care Act, President Barack Obama's health care reform that will take effect in 2014. Under the act, and health care providers will no longer be able to refuse coverage to anyone based on their past medical experience.

In 2006, 2,000,231 people between the ages of 25 and 64 were living in Kentucky, of those an estimated 19 percent were living without health insurance.[11] Almost every company that provides health care coverage in Kentucky has the right to refuse coverage. Over the decade 2000-2009 family health insurance premiums rose 3.3 times faster than median earnings. Under the new reforms, insurance companies will no longer be able to discriminate against those with pre-existing conditions. By 2019, an estimated 438,000 Kentuckians will gain coverage.[12]

The state of Kentucky believes that strong infrastructure leads to strong economic growth.[citation needed] The Kentucky Infrastructure Authority was founded in 1988 to develop and fund a better infrastructure for the state. Its main reason for existence has been to finance local development and works as an office under the Governor.[13]

In 2009, the Kentucky Infrastructure Authority distributed 47.8 million dollars to fund wastewater infrastructure projects. An additional 18.9 million dollars was made available to improve funding for drinking water projects in the state. The funding was to be distributed through the Clean Water State Revolving Fund and the Drinking Water State Revolving Fund, which were directly funded by the American Recovery and Reinvestment Act of 2009, which was strongly supported by Democrats and implemented by President Obama. Governor Beshear, a strong supporter of President Obama's Reinvestment Act, stated that these infrastructure improvements will not only create jobs but address short and long-term water challenges for the state of Kentucky.[14]