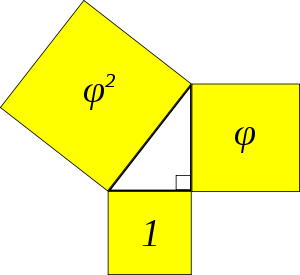 A Kepler triangle is a right triangle formed by three squares with areas in geometric progression according to the golden ratio.

and can be written:

Triangles with such ratios are named after the German mathematician and astronomer Johannes Kepler (1571–1630), who first demonstrated that this triangle is characterised by a ratio between short side and hypotenuse equal to the golden ratio.[2] Kepler triangles combine two key mathematical concepts—the Pythagorean theorem and the golden ratio—that fascinated Kepler deeply, as he expressed in this quotation:

Geometry has two great treasures: one is the theorem of Pythagoras, the other the division of a line into mean and extreme ratio. The first we may compare to a mass of gold, the second we may call a precious jewel.[3]

Some sources claim that a triangle with dimensions closely approximating a Kepler triangle can be recognized in the Great Pyramid of Giza.[4][5]

The fact that a triangle with edges

, forms a right triangle follows directly from rewriting the defining quadratic polynomial for the golden ratio

into the form of the Pythagorean theorem:

For positive real numbers a and b, their arithmetic mean, geometric mean, and harmonic mean are the lengths of the sides of a right triangle if and only if that triangle is a Kepler triangle.[6]

File:Kepler Triangle Construction.svg
A method to construct a Kepler triangle via a golden rectangle

A Kepler triangle can be constructed with only straightedge and compass by first creating a golden rectangle:

Kepler constructed it differently. In a letter to his former professor Michael Mästlin, he wrote, "If on a line which is divided in extreme and mean ratio one constructs a right angled triangle, such that the right angle is on the perpendicular put at the section point, then the smaller leg will equal the larger segment of the divided line."[2]

File:Kepler triangle squaring the circle.svg
The circle and the square have approximately the same perimeter

Take any Kepler triangle with sides

Then the perimeters of the square (

This is the mathematical coincidence

. The square and the circle cannot have exactly the same perimeter, because in that case one would be able to solve the classical (impossible) problem of the quadrature of the circle. In other words,

is a transcendental number.

According to some sources, Kepler triangles appear in the design of Egyptian pyramids.[5][7] However, the ancient Egyptians probably did not know the mathematical coincidence involving the number

and the golden ratio