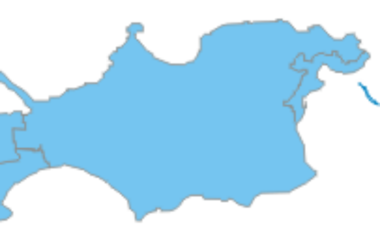 Map of the Kerch Peninsula (blue), Azov Sea (above, white), and Black Sea (below, white).

The Kerch Peninsula is a major and prominent geographic peninsula located at the eastern end of the Crimean Peninsula.

Stretching towards the Taman peninsula, it is reminiscent of an land isthmus between its two neighboring seas, the Sea of Azov and the Black Sea. Most of the peninsula is located within the Lenine Raion.

The Kerch Peninsula is almost completely surrounded by water and only to the west connects with the rest of Crimea by the Aqmanai isthmus which is only 17 kilometres (11 mi) wide (from the southern end of the Arabat Spit to the town of Primorsky (Khafuz), Feodosiya). On elevated portions of the isthmus, named after the village of Kamianske (former Aq-Monai), are seen both of the surrounding seas.

The southern coast of peninsula is washed by the Black Sea and the Bay of Feodosia, to the east as a natural border serves the Strait of Kerch, while the northern shores are part of the coastline of Sea of Azov, Kazantip Bay, and Bay of Arabat. Away to the northwest from the peninsula runs another isthmus known as the Arabat Spit (locally Arabat arrow) which separates Sivash (Rotten Sea) from Azov Sea. Other prominent features of the peninsula are the Mount Mithridat located in the east at the shores of Strait of Kerch and the Ararat Mountain (175 metres (574 ft)) located just west of the Kerch city, both of which are part of the northeastern elevated region. At the southeastern portion of peninsula are located mountains Sosman and Kharuchu-Oba. The highest mountain on the peninsula is Pikhbopai that is part of the Mithridat crest and 189 metres (620 ft) tall.

Beside the above-mentioned bays there are also Mysova bay and Tatarska bay, both located around the Kazan-Tip Cape making it look as a small peninsula.

On the territory of the peninsula are located several natural preserves (zapovedniks):