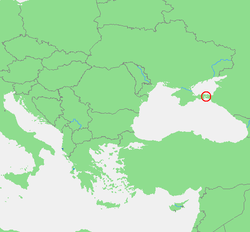 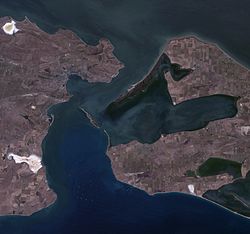 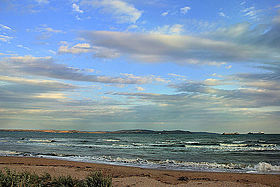 Kerch Strait. View of the port in Crimea

The Kerch Strait (Russian: Керченский пролив, Ukrainian: Керченська протока, Crimean Tatar: Keriç boğazı) connects the Black Sea and the Sea of Azov, separating the Kerch Peninsula of Crimea in the west from the Taman Peninsula of Russia's Krasnodar Krai in the east. The strait is 3.1 kilometres (1.9 mi) to 15 kilometres (9.3 mi) wide and up to 18 metres (59 ft) deep.

The most important harbor, the Crimean city of Kerch, gives its name to the strait, formerly known as the Cimmerian Bosporus. The Krasnodar Krai side of the strait contains the Taman Bay encircled by Tuzla Island and the 2003 Russian-built 3.8 kilometres (2.4 mi)-long dam to the south and Chushka Spit to the north. Russia had started the construction of a major cargo port near Taman, the most important Russian settlement on the strait, but its building has been suspended. 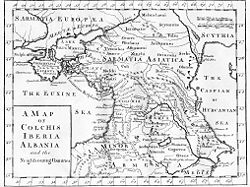 The straits are about 35 kilometers (22 mi) long and are 3.1 kilometers (1.9 mi) wide at the narrowest and separate an eastern extension of Crimea from Taman, the western extension of the Caucasus Mountains. In antiquity, there seem to have been a group of islands intersected by arms of the Kuban River (Hypanis) and various sounds which have since silted up.[1] The Romans knew the strait as the Cimmerian Bosporus (Cimmerianus Bosporus) from its Greek name, the Cimmerian Strait (Κιμμέριος Βόσπορος, Kimmérios Bosporos), which honored the Cimmerians, nearby steppe nomads.[2]

During the Second World War, the Kerch Peninsula became the scene of much desperate combat between forces of the Soviet Red Army and Germany. Fighting frequency intensified in the coldest months of year when the strait froze over, allowing the movement of troops over the ice.[3]

After the Eastern Front stabilized in early 1943, Hitler ordered the construction of a 4.8-kilometre (3.0 mi) road-and-rail bridge across the Strait of Kerch in the spring of 1943 to support his desire for a renewed offensive to the Caucasus. The cable railway (aerial tramway), which went into operation on 14 June 1943 with a daily capacity of one thousand tons, was only adequate for the defensive needs of the Seventeenth Army in the Kuban bridgehead. Because of frequent earth tremors, this bridge would have required vast quantities of extra-strength steel girders, and their transport would have curtailed shipments of military material to the Crimea. The bridge was never completed, and the Wehrmacht finished evacuating the Kuban bridgehead in September 1943.[4]

In 1944 the Soviets built a "provisional" railway bridge across the strait. Construction made use of supplies captured from the Germans. The bridge went into operation in November 1944, but moving ice floes destroyed it in February 1945; reconstruction was not attempted.[5]

A territorial dispute between Russia and Ukraine in 2003 centred on Tuzla Island in the Strait of Kerch.

On Sunday 11 November 2007 news agencies reported a very strong storm on the Black Sea. Four ships sank, six ran aground on a sandbank, and two tankers were damaged, resulting in a major oil spill and the death of 23 sailors.[6]

The Russian-flagged oil tanker Volgoneft-139 encountered trouble in the Kerch Strait where it sought shelter from the above storm.[7] During the storm the tanker split in half, releasing more than 2000 tonnes of fuel oil. It is thought[by whom?] that the effects of the spill are likely to be felt for many years to come. Four other boats sank in the storm, resulting in the release of sulphur cargo. The storm hampered efforts to rescue crew members.[8][9] Another victim of the storm, the Russian cargo ship Volnogorsk, loaded with sulfur, sank at Port Kavkaz on the same day.[10] 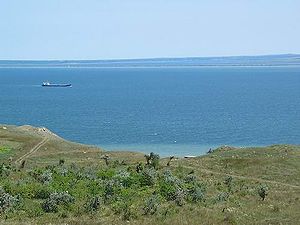 After the war, ferry transportation across the strait was established in 1952, connecting Crimea and the Krasnodar Krai (Port Krym – Port Kavkaz line). Originally there were four train ferry ships; later three car-ferry ships were added. Train transportation continued for almost 40 years. The aging train-ferries became obsolete in the late 1980s and were removed from service. In the autumn of 2004, new ships were delivered as replacements and train transportation was re-established.

Moscow mayor Yuri Luzhkov campaigned for a highway bridge to be constructed across the strait. Since 1944, various bridge projects to span the strait have been proposed or attempted, always hampered by the difficult geologic and geographic configuration of the area. Construction of an approach was actually started in 2003 with the 3.8 kilometres (2.4 mi)-long dam, provoking the 2003 Tuzla Island conflict.[11]

After the 2014 Crimean crisis the government of Russia decided to build a bridge across the Kerch Strait. It is expected to be operational in 2019.

In order to improve navigational capabilities of the Strait of Kerch, which is quite shallow in its narrowest point, the Kerch-Yenikalskiy Canal was dredged through the strait. The canal can accommodate vessels up to 215 meters long with a draft of up to 8 meters with a compulsory pilot assistance.

File:Kerch aivazovsky.jpg
View across the strait in 1839, by Ivan Aivazovsky

Several fish-processing plants are located on the Crimean coast of the strait. The fishing season begins in late autumn and lasts for 2 to 3 months, when many seiners put out into the strait to fish. The Taman Bay is a major fishing ground, with many fishing villages scattered along the coast.