Kering (previously PPR) is the French luxury goods holding company owner of Alexander McQueen, Balenciaga, Brioni, Gucci, Puma, Volcom, Saint Laurent Paris, and other luxury, sport & lifestyle brands distributed in 120 countries. The company was founded in 1963 by businessman François Pinault and is now run by his son François-Henri Pinault. It is quoted on Euronext Paris and is a constituent of the CAC 40 index.

On 2 June 1962, François Pinault officially opened the Etablissements Pinault, specialized in wood trade negotiation, and then in construction material. First a company from Brittany, it grew organically and thanks to successive acquisitions, it reached national recognition. In 1987, the Pinault group took control of the paper-maker La Chapelle d’Arblay, which faced economic difficulties. It was then sold to Finnish group Kymmene. Pinault SA was listed in the Second Marché of Bourse de Paris in 1988, and allowed institutions such as the Crédit Lyonnais or the AGF to invest in its company.

A diversification towards retail and its shift towards apparel & accessories

In March 1990, François Pinault was elected president of CFAO, which specialized in electrical material distribution and negotiation in Africa.

In April 1991, Pinault SA entered the retail distribution market, with the takeover of Conforama.

In 1992, the Group sold the Compagnie Industrielle d’Ameublement (kitchen furniture), of Ordo (office furniture) and Isoroy (wood panel makers). During the same year, The Pinault-Printemps Group was born out of the Au printemps SA takeover, which owned 54% of La Redoute and Finaref. In 1993, the Armand Thierry company, bought by Le Printemps, was sold. Disco (Food-industry retailer) was also sold. 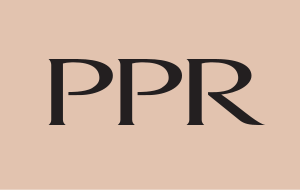 Logo of the company Pinault-Printemps-Redoute (PPR).

In 2003, PPR sold its Pinault Bois et Matériaux company to the British group Wolseley. After symbolizing the very first step of the Group in the wood trade sector, and becoming a famous French retailer in wood material construction, import and transformation, Pinault Bois was sold for 565 million euros.

In 2004, PPR sold the electrical material manufacturer Rexel. After a public bid, Pinault-Printemps-Redoute increased its shares to 99.4% of Gucci Group’s capital.

The 18 May 2005, Pinault-Printemps-Redoute changed its name to become simply PPR.

In 2006, PPR made a certain number of disposals, for example the sale of 51% of France Printemps (with brands such as Made in Sport and Citadium) to RREEF and the Borletti Group, as well as the lingerie company Orcanta, bought by Chantelle. Meanwhile, Redcats (which comprises La Redoute and many other home shopping companies) bought The Sportman’s Guide Inc.

With the acquisition of a control participation in Puma in 2007 (of 27.1%) and after acquiring a 62.1% share of Puma, the Group consolidated its position in the Sport & Lifestyle sector. In March 2007, PPR sold Kadéos to the Accor group.

1999 is the year when PPR first invested in the luxury sector, with a 42% acquisition of Gucci Group NV. More acquisitions followed to build a stronger luxury identity for the Group: Yves Saint Laurent (now Saint Laurent Paris), YSL Beauty and Sergio Rossi. Then in 2000 the jeweller Boucheron, and the watchmaker Bedat & Cie. At the same time, PPR launched Citadium, a new sports boutique, and bought Surcouf.

Bédat & Co - on February 25, 2009 Gucci announced a definitive agreement for the sale of Bédat & Co to Luxury Concepts Watches & Jewellery Sdn Bhd, the Malaysia-based brand management company, in partnership with Viviane Fankhauser, then acting CEO of the firm.[8]

In July 2011, PPR took control of the Sowind Group, the Swiss watchmaker, whose brands include Girard-Perregaux and JeanRichard.

In August 2012, PPR announced its new joint-venture with the online retail specialist Yoox to administer the e-commerce operations of most of its luxury brands.[11]

In January 2013, PPR and Christopher Kane signed a partnership. PPR acquired 51% of the company’s shares.[12]

Acquisition of a majority stake in the Italian Pomellato group.[14]

In September 2013, Kering announced its minority stake in the brand of the promising New-Yorker designer Joseph Altuzarra.[15]

On 3 May 2011, the Group launched a friendly bid for Volcom,[17] a company specialized in action sports. This acquisition reinforces PPR’s new positioning. As François-Henri Pinault said: “PPR’s Sport & Lifestyle Group is well-positioned to develop in the promising segment of action sport, thanks to Volcom’s outstanding brand with strong identity and unique heritage,”.[18]

On 22 March 2013, FHP suggested the name Kering to highlight the company's focus on its luxury and sport/lifestyle divisions; it is pronounced the same as "caring", but also plays with the origins of the business in the Brittany region of France. In Breton language, ker means ‘home’ or ‘place to live’. The new logo takes an owl as its emblem, an animal which carries a deep significance.

“Kering is a name with meaning, a name that expresses both our purpose and our corporate vision. Strengthened by this new identity, we shall continue to serve our brands to liberate their potential for growth”,[5] said CEO François-Henri Pinault.

With the Kering Academy and HEC Business School in Paris, Tsinghua University in China offers an 18- month executive program focused on Kering "managers identified as high-potential talents at Kering and its brands operating in China."[1]

Kering is made up of 2 divisions: Luxury and Sports & Lifestyle. In 2014, the brands of the Group are the following:

The Independent Directors are:

Sales which had an impact on the Group with the associated key dates:

Sustainability has been at the heart of Kering’s strategy and the Group’s actions for over a decade. In April 2012, François-Henri Pinault publicly announced a set of quantifiable targets covering both environmental and social aspects, for the Group to achieve by 2016.[28] Additionally, Kering has developed an innovative tool called the Environmental Profit & Loss account (E P&L). Pioneered by PUMA,[29] Kering is now rolling out this tool across the entire Group, with a Group E P&L to be published in 2016. Since September 2012, the sustainability engagements of Kering are under the direction of Marie-Claire Daveu.[30][31] Kering sustainability department is composed of 15 experts, and with an annual budget of 10 million of euros is indexed on the evolution of the stock dividend of Kering.

"Sustainable business is smart business" is the principle that CEO and Chairman François-Henri Pinault uses to illustrate the Group’s sustainability engagements.[32]

In 2009, and PPR supported Home, a movie by Yann Arthus-Bertrand and co-produced by Luc Besson. To celebrate the movie’s official launch (on 5 June 2009), free screenings were held in over 100 countries: on television (France 2 on the night of its launch at 8:35pm in France), on DVD and also in several cities around the globe, including the Champ de Mars in Paris during open air projections. Home was seen by over 400 million people around the world [33]

The Kering Foundation is part of the Kering Sustainability Department.

The Foundation is committed to defend women’s dignity and rights by combating violence against women and promoting women’s empowerment. Since 2009, the Foundation initiated 47 partnerships with NGOs and accompanied social entrepreneurs for the benefit of more than 140,000 women. In coherence with the Group’s new orientation, the Foundation focuses on three geographic areas: Western Europe, Asia and the Americas.

Many brands have their own philanthropic projects, which the Kering Foundation supports. Gucci, one of the Group's major brands launched its project Chime for Change, an international campaign led by actress Salma Hayek-Pinault, Frida Giannini, creative director of Gucci and Beyoncé Knowles, which raises funds for women’s emancipation focusing on education, health and justice.[34]