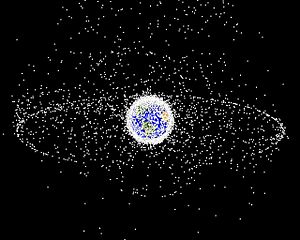 Space debris populations seen from outside geosynchronous orbit (GEO). There are two primary debris fields: the ring of objects in GEO and the cloud of objects in low earth orbit (LEO).

The Kessler syndrome (also called the Kessler effect,[1][2] collisional cascading or ablation cascade), proposed by the NASA scientist Donald J. Kessler in 1978, is a scenario in which the density of objects in low Earth orbit (LEO) is high enough that collisions between objects could cause a cascade—each collision generating space debris that increases the likelihood of further collisions.[3] One implication is that the distribution of debris in orbit could render space activities and the use of satellites in specific orbital ranges unfeasible for many generations.[3]

Every satellite, space probe, and manned mission has the potential to produce space debris. A cascading Kessler syndrome becomes more likely as satellites in orbit increase in number and old satellites become inoperative. As of 2014, there were about 2,000 commercial and government satellites orbiting the Earth.[4] It is estimated that there are 300,000 pieces of space junk ranging from 1 cm to 25 cm, and on average one satellite is destroyed each year.[4]

The most commonly used orbits for both manned and unmanned space vehicles are low Earth orbits, which cover an altitude range low enough for residual air drag to be sufficient to help keep the zone clear. Collisions that occur in this altitude range are also less of an issue because the directions into which the fragments fly and/or their lower specific energy often result in orbits intersecting with Earth or having perigee below this altitude. 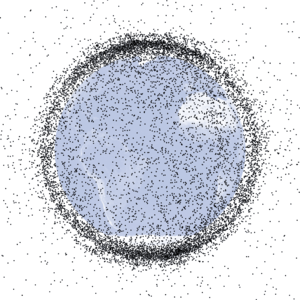 Image made from models used to track debris in Earth orbit.

The Kessler syndrome is especially insidious because of the "domino effect" and "feedback runaway" wherein impacts between objects of sizable mass spalls off debris from the force of collision. The shrapnel can then hit other objects, producing even more space debris: if a large enough collision or explosion were to occur, such as between a space station and a defunct satellite, or as the result of hostile actions in space, then the resulting debris cascade could make prospects for longterm viability of satellites in low earth orbit extremely low.[5][6] However, even a catastrophic Kessler scenario at LEO would pose minimal risk for launches continuing past LEO, or satellites traveling at MEO or GEO. The catastrophic scenarios predict an increase on the number of collisions per year, as opposed to a physically impassable barrier to space exploration which occurs in higher orbits.

Designers of a new vehicle or satellite are frequently required to demonstrate that it can be safely disposed of at the end of its life, for example by use of a controlled atmospheric reentry system or a boost into a graveyard orbit.[7] In order to obtain a license to provide telecommunications services in the United States, the Federal Communications Commission (FCC) requires all geostationary satellites launched after March 18, 2002, to commit to moving to a graveyard orbit at the end of their operational life.[8] U.S. government regulations require a boost,

One technology proposed to help deal with fragments from 1 cm to 10 cm in size is the laser broom, a proposed multimegawatt land-based laser that could deorbit debris: the side of the debris hit by the laser would ablate and create a thrust that would change the eccentricity of the remains of the fragment until it would re-enter harmlessly.[10]

The Envisat satellite is a large, inactive satellite with a mass of 8,211 kg (18,102 lb) that drifts at 785 km (488 mi), an altitude where the debris environment is the greatest—2 catalogued objects can be expected to pass within about 200 meters of Envisat every year[11]—and likely to increase. It could easily become a major debris contributor from a collision during the next 150 years that it will remain in orbit.[11]

The 2013 film Gravity features a Kessler syndrome catastrophe as the event that sets the plot in motion.[12]

The plot of 1999 manga and 2003 anime Planetes revolves around a crew in charge of disposal of debris to prevent further damage and destruction of spacecraft.

The plot of Neal Stephenson's 2015 novel Seveneves begins with the unexplained explosion of the Moon into seven large pieces, the subsequent creation of a cloud of debris by Kessler syndrome collisions, and the eventual bombardment of Earth's surface by lunar meteoroids.[13]