From Infogalactic: the planetary knowledge core
Jump to: navigation, search
For other uses, see Ketch (disambiguation). 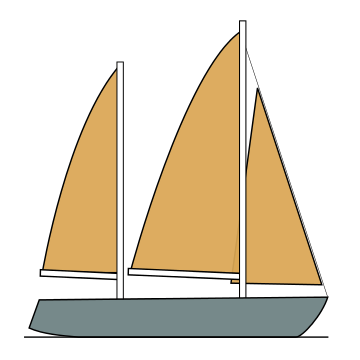 A ketch is a sailing craft with two masts. The distinguishing characteristic of a ketch is that the forward of the two masts (the "mainmast") is larger than the after mast (the "mizzen"). Historically the ketch was a square-rigged vessel, most commonly used as a freighter or fishing boat in northern Europe, particularly in the Baltic and North seas. In modern usage, the ketch is a fore-and-aft rigged vessel used as a yacht or pleasure craft. 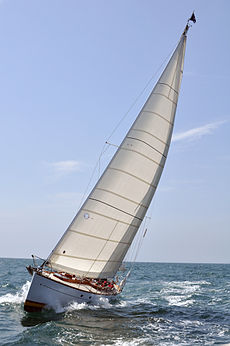 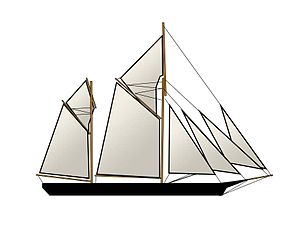 To assist going to windward, a ketch may carry one or more jibs or foresails. If a ketch has no jibs, it is called a cat ketch or a periauger. On older, larger ketches the main mast may in addition carry one or more square rigged topsails.

The large fore-and-aft sail on the mainmast is the mainsail, while the sail on the mizzen mast is the mizzen. These sails may be any type of fore-and-aft sail, in any combination. Most modern ketches are Bermuda rigged, but other possible rigs on a ketch include gunter rigs and gaff rigs. The Scots Zulu, for example, had a dipping lug main with a standing lug mizzen.

In northern Europe and among long distance cruisers, the ketch is often preferred to a sloop, since the additional sail allows a better balance, and a smaller more easily handled mainsail. An advantage of the ketch is when sudden increases in wind strength require a rapid reefing: the mainsail can be dropped, reducing sail and leaving a balanced sail-plan with jib and mizzen set. The ketch rig also allows sailing only on the mizzen and jib, without introducing excessive lee helm, and in an emergency can be quite well steered without use of the rudder. When running before the wind or reaching across the wind, a ketch may set extra sails such as a spinnaker on the main mast, and a spinnaker or mizzen staysail on the mizzen mast. Another advantage of a ketch is at anchor, where the mizzen sail may be used to hold the boat steady in the wind; this reduces roll in an otherwise uncomfortable anchorage. 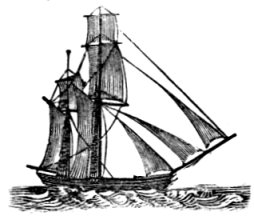 The square-rigged ketch was largely supplanted by the brig, which differs from the ketch by having a forward mast smaller (or occasionally similar in size) than the after mast, and by the hoy, which was fore-and-aft rigged. Other similar craft include the snow and the pink.

Both the ketch and the yawl have two masts, with the main mast foremost; the distinction being that a ketch has the mizzen mast forward of the rudder post, whereas on a yawl, it is aft of the rudder post.[2][3] Compared to a ketch, a similar size yawl's mizzen sail is much smaller than the main, because of the limitations of the mizzen sheet. So on a ketch, the principal purpose of the mizzen sail is to help propel the vessel, while on a yawl, the smaller mizzen mainly serves the purposes of trim and balance. Yawls tend to have mainsails almost as large as those of comparable sloops.

A ketch may be distinguished from a cutter or a sloop by virtue of having two masts rather than one, though a ketch with two foresails is sometimes called a "cutter-rigged ketch".

Both the ketch and the yawl differ from the two-masted schooner, whose aft mainmast is taller than the foremast. (It follows that a schooner does not have a mizzen mast.) If a vessel has two masts of approximately the same height, the rig with the larger sail forward is called a ketch, while the rig with the larger sail aft is a schooner. The American two-masted schooner is rare in Europe, where the ketch rig is preferred.

Ketch was a "catch" or fishing boat (ketch from Middle English cache, from cacchen, "to catch").[4] The mizzen is bigger than seen on a yawl in order to hold the bow (front) of a boat toward the wind and oncoming waves. The mainsail at the front of the boat would have been dropped and the mizzen trimmed tight on the centreline. Set up this way most boats will point directly into the wind in a reliable way. It is also possible to ease the mizzen slightly to allow the boat to move slowly forward.

For enough sail area to propel a fishing boat the mizzen mast has to move forward toward the middle of the boat which allows its sail to be bigger without upsetting the sail balance or distribution.

A "Ketch Rig" is simply the rig that matches the function of a "Ketch" or "Catch" or fishing boat.

In the year 1775, various ketches were utilized as warships by the Sultanate of Mysore during the rule of Hyder Ali.

During the 17th and 18th centuries, ketches were commonly used as small warships, until superseded in this role by brigs during the latter part of the 18th century. The ketch continued in use as a specialized vessel for carrying mortars until after the Napoleonic wars, in this application it was called a bomb ketch.

The original Atlantis, the seagoing research vessel of the Woods Hole Oceanographic Institute commissioned in 1931, was a steel-hulled ketch.[5] In 1989 Bruce Farr designed the Maxi ketch Steinlager 2, the first maxi yacht built of composite carbon construction. This revolutionary lightweight design went on to win the Whitbread Round the World Race in 1989/90.

In 1947 a radio program called Voyage of the Scarlet Queen was set on a ketch. The Scarlet Queen was a 78-foot ketch with a white hull, teak decking, brass bright-work, and sporting the "Scarlet Queen" herself, on the bowsprit, naked as the day she was born, "a fresh, young body... looking forward, ... bold, teasing... dressed in only a crown, and painted brilliant red."

A William Garden–designed Formosa 51 ketch named Wanderer was the main setting in the 1992 film Captain Ron. Three Formosa 51s were used in filming.