From Infogalactic: the planetary knowledge core
Jump to: navigation, search
This article is about Jewish marriage contracts. For the Tractate Ketubot in the Mishnah, see Nashim. 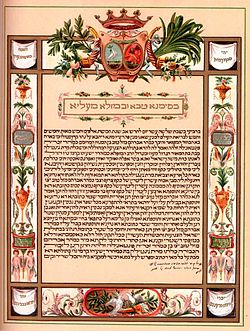 A ketubah (Hebrew: כְּתוּבָּה ; "written thing"; pl. ketubot) is a special type of Jewish prenuptial agreement. It is considered an integral part of a traditional Jewish marriage, and outlines the rights and responsibilities of the groom, in relation to the bride. Nevertheless, there is no agreement in modern times as to the monetary worth of the ketubah, and in practice it is never enforced.[1]

The rabbis in ancient times insisted on the marriage couple entering into the ketubah as a protection for the wife. It acted as a replacement of the biblical mohar[2][3][4][5][6] – the price paid by the groom to the bride, or her parents, for the marriage (i.e., the bride price). The ketubah became a mechanism whereby the amount due to the wife (the bride-price) came to be paid in the event of the cessation of marriage, either by the death of the husband or divorce. It may be noted that the biblical mohar created a major social problem: many young prospective husbands could not raise the mohar at the time when they would normally be expected to marry. So, to enable these young men to marry, the rabbis, in effect, delayed the time that the amount would be payable, when they would be more likely to have the sum. The mechanism adopted was to provide for the mohar to be a part of the ketubah. It may also be noted that both the mohar and the ketubah amounts served the same purpose: the protection for the wife should her support (either by death or divorce) cease. The only difference between the two systems was the timing of the payment. A modern secular equivalent would be the entitlement to maintenance in the event of divorce. Another function performed by the ketubah amount was to provide a disincentive for the husband contemplating divorcing his wife: he would need to have the amount to be able to pay to the wife.

The content of the ketubah is in essence a one-way contract that formalizes the various requirements by Halakha (Jewish law) of a Jewish husband vis à vis his wife. The Jewish husband takes upon himself in the ketubah the obligation that he will provide to his wife three major things: clothing, food and conjugal relations,[7] and also that he will pay her a pre-specified amount of cash in the case of a divorce. Thus the content of the ketubah essentially dictates security and protection for the woman, and her rights in the marriage. (Conservative Jews often include an additional paragraph, called the Lieberman clause, which stipulates that divorce will be adjudicated by a modern rabbinical court (a beth din) in order to prevent the creation of a chained wife.) In Orthodox circles, prenuptial agreements are becoming more common as well.[8]

The Talmud Yerushalmi opines that the Bat-Kohen who marries a non-Kohen receives that standard two hundred Zuz amount, as a penalty for not marrying within the greater family of Kohanim.[11]

Based on the research of A. Epstien, in his work "Toldot HaKetubah B'Yisrael", the recording of Four hundred Zuz in the Ketubah of the Bat-Kohen was well in effect during the Amora period, but from thence onward, no mentioning of the increased amount is found in Rabbinic sources.[12]

The ketubah is a significant popular form of Jewish ceremonial art. Ketubot have been made in a wide range of designs, usually following the tastes and styles of the era and region in which they are made. Many couples follow the Jewish tradition of hiddur mitzvah which calls for ceremonial objects such as the ketubah to be made as beautiful as possible.

Traditional ketubot are not written in the Hebrew language, but in Aramaic, the lingua franca of Jews at the time ketubot became standardized. This was done in order to make sure the bride and groom understood the contract that was being signed. Many contemporary ketubot have translations into English or other vernacular languages or an accompanying vernacular text. Many Conservative Jews and other non-Orthodox Jews use ketubot written in Hebrew rather than in Aramaic. Others may use Aramaic ketubot but also have an additional official version in Hebrew.[13]

In recent years kettubot have become available in a variety of formats as well as the traditional Aramaic text used by the Orthodox community. Available texts include Conservative text, using the Lieberman Clause, Reform, Egalitarian and Interfaith texts. Some congregations have texts available for same sex couples too. In addition, Secular Humanist and Anniversary texts are also available today. 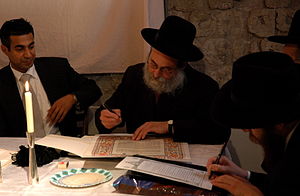 Rabbi filling in the final details of a ketubah

In a traditional Jewish wedding ceremony, the ketubah is signed by two witnesses and traditionally read out loud under the chuppah. Close family, friends or distant relatives are invited to witness the ketubah, which is considered an honour. The witnesses must be halakhically valid witnesses, and so cannot be a blood relative of the couple. In Orthodox Judaism, women are also not considered to be valid witnesses. The ketubah is handed to the bride for safekeeping.

Ketubot are often hung prominently in the home by the married couple as a daily reminder of their vows and responsibilities to each other.

However, in some communities, the ketubah is either displayed in a very private section of the home or is not displayed at all. Various reasons given for this include the fact that the details specify personal details, prominent display may invite jealousy or fears of the evil eye. Historically, the ketubah specified whether the bride was a virgin. In Sephardic communities, it still specifies the actual contributions of the family to the new household and the divorce settlement; Ashkenazi communities have adopted the custom of having set amounts for all weddings.

According to Jewish law, spouses are prohibited from living together if the ketubah has been destroyed, lost, or is otherwise unretrievable.[14][15] In such case a second ketubah is made up (called a Ketubah De'irketa[16]), which states in its opening phrase that it comes to substitute a previous ketubah that has been lost.