While with the Braves, Millwood was part of a pitching rotation which featured Greg Maddux, Tom Glavine and John Smoltz. In 1999 he was selected to his only All-Star Game and helped the Braves to the 1999 World Series and two seasons later the 2001 National League Championship Series. As a member of the Indians, his 2.86 ERA lead all American League pitchers. In 2012, Millwood became the 67th pitcher to record 2,000 career strikeouts.

Millwood graduated from Bessemer City High School in North Carolina. He has a League ballpark named for him in Bessemer City. Millwood was married to Rena Stevens Millwood from 1999–2008 and had 2 children from that marriage. [1] Before leaving Seattle, Millwood dated well known bartender Erin S. Campbell.

Millwood was drafted by the Atlanta Braves in the 11th round of the 1993 MLB draft. After four years in the minors, Millwood made his debut with the Atlanta Braves on July 14, 1997. A year later, he won 17 games. Millwood formed a part of the Braves' star pitching rotation, which also consisted of Greg Maddux, John Smoltz and Tom Glavine. According to Nate Silver, the 1997 Braves starting rotation was the best in the history of baseball.[2]

The 1999 campaign was one of Millwood's best. He posted career-highs in wins (18, also achieved in 2002), ERA (2.68), strikeouts (205) and WHIP (0.996). He finished third in the National League Cy Young voting (losing to the Arizona Diamondbacks' Randy Johnson) and 26th on the National League MVP ballot. He was selected as an All-Star in 1999, his only appearance in the Midsummer Classic.

Before the 2003 season, Millwood was traded by the Braves to the Philadelphia Phillies for catcher Johnny Estrada in order to cut their payroll in the midst of economic difficulties. He went 14-12 with his new team, including throwing a no-hitter against the San Francisco Giants on April 27 coming in the Phillies final season at the stadium. This was one of only two no-hitters ever thrown at the now-demolished Veterans Stadium. He also led the majors in stolen bases allowed, with 41.

In 2005, Millwood signed a one-year contract as a free agent with the Cleveland Indians. He came back from injury well, leading the American League in ERA (2.86). However, he managed a record of only 9-11, due to poor run support.[quantify] During 2005, he again led the majors in stolen bases allowed, with 33. He was tied for 6th in the balloting for the AL Cy Young Award.[citation needed] 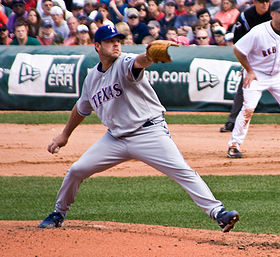 Millwood pitching for the Texas Rangers in 2008.

In 2008, when batters did hit the ball against him, it was with uncommon success, as his .358 batting-average-against on balls in play was the highest in the major leagues.[5] 26% of all balls put in play against him were line drives, the highest percentage in the majors.[6]

Millwood was traded to the Baltimore Orioles on December 9, 2009, for Chris Ray and a player to be named later (left-handed pitcher Ben Snyder, a Rule 5 pick from San Francisco).

On March 25, 2011, Millwood was signed to a minor league contract by the New York Yankees.[7] After making three starts in the minor leagues, he opted out of his contract on May 1.[8]

Millwood signed a minor league contract with the Boston Red Sox on May 19, 2011.[9] He was released on August 7, exercising an opt-out clause.

On August 8, 2011, Millwood signed a minor league contract with the Colorado Rockies.[10][11] Millwood was called up August 10 to fill a void after an injury to Juan Nicasio.

On January 22, 2012, it was reported that the Seattle Mariners had signed Millwood to a minor league contract.[12] He was called up from Triple-A and made his first major league start of the season on April 22 against the Chicago White Sox.[13] On May 13, Millwood became the 67th pitcher to record 2,000 career strikeouts when he struck out Yankee Curtis Granderson.[14][15] Millwood notched a win over Yankee starter Andy Pettitte, who was pitching in the majors for the first time since 2010.[16][17]

On June 8, Millwood pitched the first six innings of a combined no-hitter against the Los Angeles Dodgers before leaving the game due to a groin injury.[18] Charlie Furbush, Stephen Pryor, Lucas Luetge, Brandon League, and Tom Wilhelmsen helped him complete the bid. Millwood was put on the disabled list in September with soreness in his shoulder and missed the remainder of the regular season.[19]

Millwood is a sinkerballer. His sinker is 89–92 mph and is complemented mostly by an 89–91 mph cutter and 83–86 mph slider. He also has a curveball (71–74) and a changeup (82–84) that he uses against left-handed hitters. His cutter tends to be used early in the count, with higher use of his breaking balls in 2-strike situations.[21]