Kevlar is the registered trademark for a para-aramid synthetic fiber, related to other aramids such as Nomex and Technora. Developed by Stephanie Kwolek at DuPont in 1965,[1][2][3] this high-strength material was first commercially used in the early 1970s as a replacement for steel in racing tires. Typically it is spun into ropes or fabric sheets that can be used as such or as an ingredient in composite material components.

Currently, Kevlar has many applications, ranging from bicycle tires and racing sails to body armor, because of its high tensile strength-to-weight ratio; by this measure it is 5 times stronger than steel.[2] It is also used to make modern drumheads that withstand high impact. When used as a woven material, it is suitable for mooring lines and other underwater applications.

A similar fiber called Twaron with roughly the same chemical structure was developed by Akzo in the 1970s; commercial production started in 1986, and Twaron is now manufactured by Teijin.[4][5] 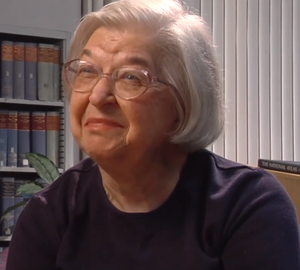 Poly-paraphenylene terephthalamide – branded Kevlar – was invented by Polish-American chemist Stephanie Kwolek while working for DuPont,[6] in anticipation of a gasoline shortage. In 1964, her group began searching for a new lightweight strong fiber to use for light but strong tires.[6] The polymers she had been working with at the time, poly-p-phenylene-terephthalate and polybenzamide,[7] formed liquid crystal while in solution, something unique to those polymers at the time.[6]

The solution was "cloudy, opalescent upon being stirred, and of low viscosity" and usually was thrown away. However, Kwolek persuaded the technician, Charles Smullen, who ran the "spinneret", to test her solution, and was amazed to find that the fiber did not break, unlike nylon. Her supervisor and her laboratory director understood the significance of her accidental discovery and a new field of polymer chemistry quickly arose. By 1971, modern Kevlar was introduced.[6] However, Kwolek was not very involved in developing the applications of Kevlar.[8]

Kevlar is synthesized in solution from the monomers 1,4-phenylene-diamine (para-phenylenediamine) and terephthaloyl chloride in a condensation reaction yielding hydrochloric acid as a byproduct. The result has liquid-crystalline behavior, and mechanical drawing orients the polymer chains in the fiber's direction. Hexamethylphosphoramide (HMPA) was the solvent initially used for the polymerization, but for safety reasons, DuPont replaced it by a solution of N-methyl-pyrrolidone and calcium chloride. As this process had been patented by Akzo (see above) in the production of Twaron, a patent war ensued.[9]

Kevlar (poly paraphenylene terephthalamide) production is expensive because of the difficulties arising from using concentrated sulfuric acid, needed to keep the water-insoluble polymer in solution during its synthesis and spinning.[citation needed]

Several grades of Kevlar are available:

The ultraviolet component of sunlight degrades and decomposes Kevlar, a problem known as UV degradation, and so it is rarely used outdoors without protection against sunlight.[citation needed] 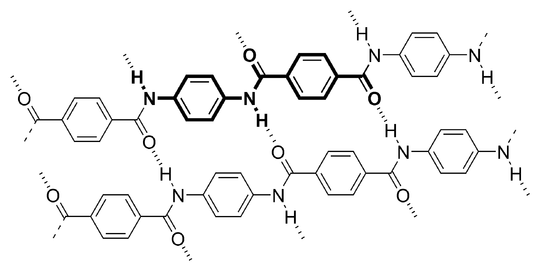 When Kevlar is spun, the resulting fiber has a tensile strength of about 3,620 MPa,[13] and a relative density of 1.44. The polymer owes its high strength to the many inter-chain bonds. These inter-molecular hydrogen bonds form between the carbonyl groups and NH centers. Additional strength is derived from aromatic stacking interactions between adjacent strands. These interactions have a greater influence on Kevlar than the van der Waals interactions and chain length that typically influence the properties of other synthetic polymers and fibers such as Dyneema. The presence of salts and certain other impurities, especially calcium, could interfere with the strand interactions and care is taken to avoid inclusion in its production. Kevlar's structure consists of relatively rigid molecules which tend to form mostly planar sheet-like structures rather like silk protein.[14]

Kevlar maintains its strength and resilience down to cryogenic temperatures (−196 °C); in fact, it is slightly stronger at low temperatures. At higher temperatures the tensile strength is immediately reduced by about 10–20%, and after some hours the strength progressively reduces further. For example, at 160 °C (320 °F) about 10% reduction in strength occurs after 500 hours. At 260 °C (500 °F) 50% strength reduction occurs after 70 hours.[15]

Kevlar is often used in the field of cryogenics for its low thermal conductivity and high strength relative to other materials for suspension purposes. It is most often used to suspend a paramagnetic salt enclosure from a superconducting magnet mandrel in order to minimize any heat leaks to the paramagnetic material. It is also used as a thermal standoff or structural support where low heat leaks are desired. 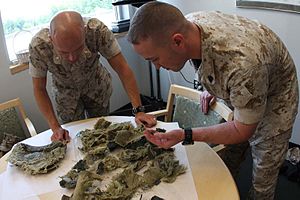 Kevlar is a well-known component of personal armor such as combat helmets, ballistic face masks, and ballistic vests. The PASGT helmet and vest used by United States military forces since the 1980s both have Kevlar as a key component, as do their replacements. Other military uses include bulletproof facemasks used by sentries and spall liners used to protect the crews of armoured fighting vehicles. Even Nimitz-class aircraft carriers include Kevlar armor around vital spaces. Related civilian applications include emergency services' protection gear if it involves high heat (e.g., fire fighting), and Kevlar body armor such as vests for police officers, security, and SWAT.[16]

Kevlar is used to manufacture gloves, sleeves, jackets, chaps and other articles of clothing[17] designed to protect users from cuts, abrasions and heat. Kevlar-based protective gear is often considerably lighter and thinner than equivalent gear made of more traditional materials.[16] 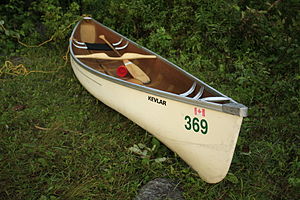 Kevlar is a very popular material for racing canoes.

It is used for motorcycle safety clothing, especially in the areas featuring padding such as shoulders and elbows. In fencing it is used in the protective jackets, breeches, plastrons and the bib of the masks. It is increasingly being used in the peto, the padded covering which protects the picadors' horses in the bullring. Speedskaters also frequently wear an under-layer of Kevlar fabric to prevent potential wounds from skates in the event of a fall or collision

In kyudo, or Japanese archery, it may be used as an alternative to more expensive[citation needed] hemp for bow strings. It is one of the main materials used for paraglider suspension lines.[18] It is used as an inner lining for some bicycle tires to prevent punctures. In table tennis, plies of Kevlar are added to custom ply blades, or paddles, in order to increase bounce and reduce weight. Tennis racquets are sometimes strung with Kevlar. It is used in sails for high performance racing boats.

With advancements in technology, Nike used Kevlar in shoes for the first time. It launched the Elite II Series,[19] with enhancements to its earlier version of basketball shoes by using Kevlar in the anterior as well as the shoe laces. This was done to decrease the elasticity of the tip of the shoe in contrast to nylon used conventionally as Kevlar expanded by about 1% against nylon which expanded by about 30%. Shoes in this range included LeBron, HyperDunk and Zoom Kobe VII. However these shoes were launched at a price range much higher than average cost of basketball shoes.

It was also used as speed control patches for certain Soap Shoes models.[citation needed] and the laces for the adidas F50 adiZero Prime football boot.

Kevlar has also been found to have useful acoustic properties for loudspeaker cones, specifically for bass and midrange drive units.[20] Additionally, Kevlar has been used as a strength member in fiber optic cables such as the ones used for audio data transmissions.[21]

Kevlar can be used as an acoustic core on bows for string instruments.[22] Kevlar's physical properties provide strength, flexibility, and stability for the bow's user. To date, the only manufacturer of this type of bow is CodaBow.[23]

Kevlar is also presently used as a material for tailcords (a.k.a. tailpiece adjusters), which connect the tailpiece to the endpin of bowed string instruments.[24]

Kevlar is sometimes used as a material on marching snare drums. It allows for an extremely high amount of tension, resulting in a cleaner sound. There is usually a resin poured onto the Kevlar to make the head airtight, and a nylon top layer to provide a flat striking surface. This is one of the primary types of marching snare drum heads. Remo's "Falam Slam" patch is made with Kevlar and is used to reinforce bass drum heads where the beater strikes.[citation needed]

Kevlar is used in the woodwind reeds of Fibracell. The material of these reeds is a composite of aerospace materials designed to duplicate the way nature constructs cane reed. Very stiff but sound absorbing Kevlar fibers are suspended in a lightweight resin formulation.[25] 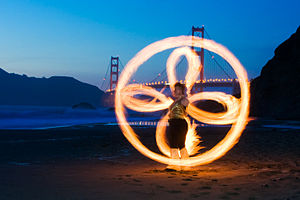 Fire poi on a beach in San Francisco

Wicks for fire dancing props are made of composite materials with Kevlar in them. Kevlar by itself does not absorb fuel very well, so it is blended with other materials such as fiberglass or cotton. Kevlar's high heat resistance allows the wicks to be reused many times.

Kevlar is sometimes used as a substitute for Teflon in some non-stick frying pans.[26]

The fiber is used in woven rope and in cable, where the fibers are kept parallel within a polyethylene sleeve. The cables have been used in suspension bridges such as the bridge at Aberfeldy in Scotland. They have also been used to stabilize cracking concrete cooling towers by circumferential application followed by tensioning to close the cracks. Kevlar is widely used as a protective outer sheath for optical fiber cable, as its strength protects the cable from damage and kinking. When used in this application it is commonly known by the trademarked name Parafil.[citation needed]

Kevlar was used by scientists at Georgia Institute of Technology as a base textile for an experiment in electricity-producing clothing. This was done by weaving zinc oxide nanowires into the fabric. If successful, the new fabric will generate about 80 milliwatts per square meter.[27]

A retractable roof of over 60,000 square feet (5,575 square metres) of Kevlar was a key part of the design of Montreal's Olympic stadium for the 1976 Summer Olympics. It was spectacularly unsuccessful, as it was completed ten years late and replaced just ten years later in May 1998 after a series of problems.[28][29]

The chopped fiber has been used as a replacement for asbestos in brake pads. Dust produced from asbestos brakes is toxic, while aramids are a benign substitute.[citation needed]

Kevlar can be found as a reinforcing layer in rubber bellows expansion joints and rubber hoses, for use in high temperature applications, and for its high strength. It is also found as a braid layer used on the outside of hose assemblies, to add protection against sharp objects.[citation needed]

A thin Kevlar window has been used by the NA48 experiment at CERN to separate a vacuum vessel from a vessel at nearly atmospheric pressure, both 192 cm in diameter. The window has provided vacuum tightness combined with reasonably small amount of material (only 0.3% to 0.4% of radiation length).[citation needed]

The Motorola RAZR Family, the Motorola Droid Maxx, and the OnePlus 2 have a Kevlar backplate, chosen over other materials such as carbon fiber due to its resilience and lack of interference with signal transmission.[30]

The Kevlar fiber/epoxy matrix composite materials can be used in marine current turbine (MCT) or wind turbine due to their high specific strength and light weight compared to other fibers.[31]