From Infogalactic: the planetary knowledge core
Jump to: navigation, search
This article is about the village named Key Biscayne. For the island of the same name, see Key Biscayne. 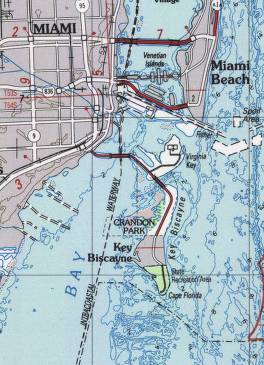 Key Biscayne is an island town in Miami-Dade County, Florida, United States. The population was 12,344 at the 2010 census.[3]

Key Biscayne lies south of Miami Beach and east of Miami. The village is connected to Miami via the Rickenbacker Causeway, originally built in 1947. Because of its low elevation and direct exposure to the Atlantic Ocean, it is usually among the first Miami areas to be evacuated before an oncoming hurricane.

The village is bordered on the north by Crandon Park, Miami-Dade County park, on the south by Bill Baggs Cape Florida State Park, on the east by the Atlantic Ocean and on the west by Biscayne Bay.

While there had been earlier schemes to develop a town on Key Biscayne, it wasn't until the opening of the four-mile (6 km) long Rickenbacker Causeway from Miami to Virginia Key and on to Key Biscayne in 1947 that the island was opened up to large scale residential development. The northern two-thirds of the island had been operated as the largest coconut plantation in the continental United States during the first half of the 20th century. In 1940 the Matheson family donated over 800 acres (3.2 km2) of their land to Dade County for a public park (Crandon Park) in exchange for a commitment that the county would build a causeway to the island. The remaining Matheson property, stretching across the middle of the island, was then sold off to developers. Starting in 1951, the Mackle Construction Company offered new homes on the island for US$9,540, with just US$500 down. A U.S. Post Office contract branch was opened, the Community Church started holding services in an old coconut-husking shed, and the Key Biscayne Elementary School opened in 1952.[4]

The southern third of Key Biscayne, which included Cape Florida, was owned by James Deering and, after his death, by his brother Charles, for 35 years. In 1948 José Manuel Áleman, a Cuban politician in exile, bought the Cape Florida property from the Deering estate. After Áleman died in 1951, his widow, Elena Santeiro Garcia, added to her Cape Florida property by buying an ocean-to-bay strip that had been part of the Matheson property. This strip included a canal that had been dug by William Matheson in the 1920s, and which extended from the bay across most of the island. The land north of this canal was developed as part of what is now the Village of Key Biscayne. Garcia sold the Cape Florida property in 1966 to the state of Florida. This land became Bill Baggs Cape Florida State Park, which opened January 1, 1967.[5]

President Richard Nixon purchased the first of his three waterfront homes, forming a compound known as the Florida White House, in 1969 to be close to his close friend and confidant, Bebe Rebozo and industrialist Robert Abplanalp (inventor of the modern spray can valve). Bebe Rebozo, owner of the Key Biscayne Bank, was indicted for laundering a $100,000 donation from Howard Hughes to the Nixon election campaign. President Kennedy and Nixon met for the first time after the 1960 Election loss by Nixon in an oceanfront villa at the old Key Biscayne Hotel. Plans for the Watergate break-in at Democratic headquarters were discussed at the Key Biscayne Nixon compound and, as the Watergate scandal unfolded, Nixon spent more time in seclusion there. Nixon visited Key Biscayne more than 50 times between 1969 and 1973. The U.S. Department of Defense spent $400,000 constructing a helicopter landing pad in Biscayne Bay adjacent to the Nixon compound and when Nixon sold his property, including the helicopter pad, there were public accusations that he enriched himself at taxpayer expense.

The area was incorporated as a new municipality in 1991 - the first new city in Miami-Dade County in over fifty years. Rafael Conte was elected the first mayor along with members of the founding Village Council including Clifford Brody, Mortimer Fried, Michael Hill, Luis Lauredo, Joe Rasco, and Raymond Sullivan. The municipality's first manager was C. Samuel Kissinger and the first clerk was Guido Inguanzo. The incorporation of the Village provided local control over taxes and future development.

In 1992, Hurricane Andrew flooded some homes and businesses on Key Biscayne but the eye wall passed over uninhabited Bill Baggs Cape Florida State Park which received the brunt of the storm. The storm damage was a blessing for the park because it destroyed all the non-native vegetation that the state had been trying to eradicate. Federal and State funding allowed the replanting with native vegetation making the park a showplace natural area. In recent years, the construction of several large resort hotels, condominium complexes and shopping centers on the island has affected the once bucolic island life, as commercialism has continued to accelerate at a frenetic pace. The Village has its own fire, police and public elementary and middle school. The millage tax rate remains one of the lowest of any municipality in Miami-Dade County. In 2004, the Village completed the construction of a civic center including fire, police and administration buildings and a recreation and community center with indoor multi use courts, outdoor swimming pool and a renowned musical theater program.

Key Biscayne exhibits a tropical monsoon climate despite some temperate influences which results in winter temperatures being more than 16F cooler than summer temperatures. Key Biscayne experiences hot, humid summers and mild, dry winters. Due to its island location, Key Biscayne is subject to cooler highs than Miami year-round. Extremes have ranged from 35°F in January 2010 to 96°F in April 2015. Hurricanes threaten the island occasionally, though landfalls are rare. Precipitation is lower than that of Miami, as the Atlantic Ocean inhibits summer thunderstorm convection.

Controversy over hotels and condominiums on Key Biscayne

As noted above, the construction of several condominium complexes in Key Biscayne caused the population to soar. In 2007, voters approved an amendment to the village charter requiring that future land use changes be approved by voters. In 2008, the village council, saying that requiring community voting on zoning changes infringed on its responsibility, submitted another proposal to revise the charter. But on November 4, 2008, voters overwhelmingly rejected the council's proposed change, defeating the amendment by a more than two-to-one margin.[16][17]

The controversy over density in the village is related to the fate of the Sonesta hotel property on the eastern side of the island.

There are several large condominium and hotel complexes on Key Biscayne, including

The Islander News covers news, events and happenings on the island. It is the only newspaper in South Florida catering exclusively to residents of Key Biscayne. They also publish "Island Life" The Official Guide and Directory of the Key Biscayne Chamber of Commerce. Published annually, "Island Life" contains community information and a comprehensive business directory of Chamber members. The Chamber also publishes a bi-weekly e-newsletter with a circulation of over 1,000.

Key Biscayne Magazine is a lifestyle magazine based on the island. The magazine's tagline is, "Island Living at Its Finest." 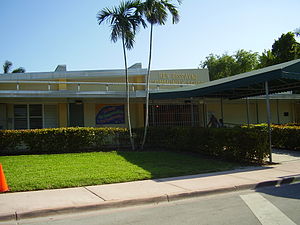 In 2012 MAST Academy, a magnet school on Virginia Key, announced it will expand by 1,100 seats with preference for eligible Key Biscayne residents.[22]

The Key Biscayne Presbyterian Church School, located on 160 Harbor Drive, offers exceptional outdoor education programs for Toddlers through Kindergarten. The School is situated on Biscayne Bay with access to the mangroves where students learn about stewardship through Environmental Education. Chapel is held on Wednesday and students gain understanding about important biblical character traits that will help them to succeed. The mission of KBPCS is to "Develop & Equip the Next Generation for Christ." www.kbpcschool.org They offer free tours of the facility by calling 305.361.2058. They have been in operation for more than 20 years.