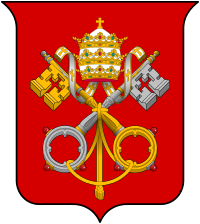 The crossed keys in the coat of arms of the Holy See symbolise the keys of heaven entrusted to Simon Peter. The keys are gold and silver to represent the power of loosing and binding. The gold key alludes to the power in the kingdom of the heavens and the silver key indicates the spiritual authority of the papacy on earth. The cord with the bows that unites the grips alludes to the bond between the two powers. The triple crown (the tiara) represents the pope's three functions as "supreme pastor", "supreme teacher" and "supreme priest". The gold cross on a monde (globe) surmounting the tiara symbolizes the sovereignty of Jesus.

In ecclesiastical heraldry, papal coats of arms (those of individual popes) and those of the Holy See and Vatican City State include an image of crossed keys to represent the metaphorical keys of the office of Saint Peter, the keys of heaven, or the keys of the kingdom of Heaven, that, according to Roman Catholic teaching,[1] Jesus promised to Saint Peter, empowering him to take binding actions.[2] In the Gospel of Matthew 16:19, Jesus says to Peter, "I will give you the keys of the kingdom of heaven, and whatever you bind on Earth shall be bound in heaven, and whatever you loose on Earth shall be loosed in heaven." 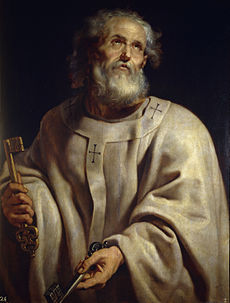 The keys of heaven or keys of Saint Peter are seen as a symbol of papal authority: "Behold he [Peter] received the keys of the kingdom of heaven, the power of binding and loosing is committed to him, the care of the whole Church and its government is given to him [cura ei totius Ecclesiae et principatus committitur (Epist., lib. V, ep. xx, in P.L., LXXVII, 745)]".[3]

Saint Peter is often depicted in Roman Catholic and Eastern Orthodox paintings and other artwork as holding a key or a set of keys. The general layout of St Peter's Basilica also is roughly key-shaped; evocative of the keys entrusted to Saint Peter. Since the 16th century a symbolical pair of keys is created for every pope and buried on death with him.