From Infogalactic: the planetary knowledge core
(Redirected from Khamissa)
Jump to: navigation, search 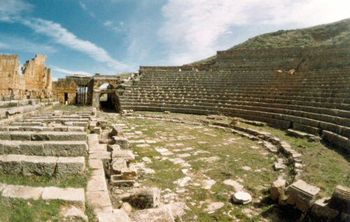 Thubursicum was located near "Numidian Tipasa"[2] and 40 kilometres (25 mi) southeast of Guelma, the coastal city known as Calama by ancient Roman settlers,[3] and 32 kilometres (20 mi) northwest of Souk Ahras, known as Thagaste by ancient Berbers and Romans.[1] It was around 250 kilometres (160 mi) west of ancient Carthage.[4]

Originally the site was a primary settlement of an indigenous Berber tribe of Numidia.[1] This city is probably the town of which Tacitus speaks in connection with the revolt of Tacfarinas in the time of Tiberius (15 CE to 24 CE).[1]

This Roman colonia in Africa, then known as Thubursicum, was a Roman town in the ancient Maghreb founded by the Emperor Trajan around 100 CE, when he elevated it to a "municipium" (with the name Municipium Ulpium Traianum Augustum Thubursicu).[1] Its inhabitants enrolled in the Papiria tribe.[1]

The theater (of Thubursicum)... is one of the most beautiful and best-preserved theaters in Africa. It measures 70 m in breadth; the maximum diameter of the hemicycle is 56.8 m. Entirely of worked stone, it undoubtedly was not completed and does not seem to have an exterior portico. It was not constructed exactly according to the standards of Vitruvius; two vaulted galleries led to the orchestra and the lower part of the cavea; the stage was spacious (breadth 43.6 m, depth 9 m), framed on the E and W by two parascenia; the wall of the stage is still well preserved (9 m high). The theater perhaps dates from the 2d c., or at the latest from the 3d century. Perseus

Thubursicum became the seat of a bishopric, with a rectangular basilica having walls covered with marble constructed in the 2nd century. It was visited by Augustine of Hippo (St. Augustine) twice. He served there as priest, coadjutor Bishop, and Bishop in regionally local Hippo Regius from 391 to 430 AD.

From 435 AD the town became part of the Vandal Kingdom centered on Carthage. In 534 AD it was reconquered in the Vandalic War by the East Roman Empire emperor Justinianus, who built a Byzantine style chapel and small forts in the area[1] It remained in the Byzantine Praetorian prefecture of Africa and Exarchate of Africa until the Muslim conquest of the Maghreb in 698-702 AD.

Thubursicum has a well preserved Roman theatre (built 2nd or 3rd century), considered one of the most beautiful and best-preserved in North Africa.[1] Other Roman and Byzantine structures and ruins remain also.

Archeological excavations, conducted from 1900 to 1922, cleared only one part of the town site. Most of the objects collected then, notably the Ancient Roman statues, are in Guelma at the Guelma Museum, Algeria.