Kharoṣṭhī manuscript from the kingdom of Shanshan

The Kharoṣṭhī script is an ancient script used in ancient Gandhara[1] (primarily modern-day Afghanistan and Pakistan) to write the Gandhari Prakrit and Sanskrit. It was popular in Central Asia as well.[1] An abugida, it was in use from the middle of the 3rd century BC until it died out in its homeland around the 3rd century AD.[1] It was also in use in Bactria, the Kushan Empire, Sogdia and along the Silk Road, where there is some evidence it may have survived until the 7th century in the remote way stations of Khotan and Niya. Kharoṣṭhī is encoded in the Unicode range U+10A00–U+10A5F, from version 4.1.0.

Kharoṣṭhī is mostly written right to left (type A), but some inscriptions (type B) already show the left to right direction that was to become universal for the later South Asian scripts.

Each syllable includes the short /a/ sound by default, with other vowels being indicated by diacritic marks. Recent epigraphical evidence highlighted by Professor Richard Salomon of the University of Washington has shown that the order of letters in the Kharoṣṭhī script follows what has become known as the Arapacana alphabet. As preserved in Sanskrit documents, the alphabet runs:

Some variations in both the number and order of syllables occur in extant texts.

Kharoṣṭhī includes only one standalone vowel sign which is used for initial vowels in words. Other initial vowels use the a character modified by diacritics. Using epigraphic evidence, Salomon has established that the vowel order is /a e i o u/, rather than the usual vowel order for Indic scripts /a i u e o/. This is the same as the Semitic vowel order. Also, there is no differentiation between long and short vowels in Kharoṣṭhī. Both are marked using the same vowel markers.

The alphabet was used in Gandharan Buddhism as a mnemonic for remembering a series of verses relating to the nature of phenomena. In Tantric Buddhism this list was incorporated into ritual practices, and later became enshrined in mantras.

A tablet which contains nearly all the alphabets and numerals

Kharoṣṭhī included a set of numerals that are reminiscent of roman numerals. The symbols were I for the unit, X for four (perhaps representative of four lines or directions), ੭ for ten (doubled for twenty), and ʎ for the hundreds multiplier. The system is based on an additive and a multiplicative principle, but does not have the subtractive feature used in the Roman number system.[2]

Note that the table beside reads right-to-left, just like the Kharoṣṭhī abugida itself and the displayed numbers.

The Indo-Greek Hashtnagar Pedestal symbolizes bodhisattva and ancient Kharoṣṭhī script. Dated to 384 of unknown era. Found near Rajar in Gandhara, Pakistan. Original is exhibited at the British Museum. 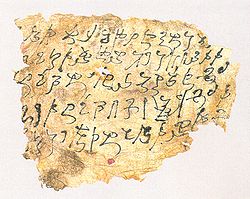 Scholars are not in agreement as to whether the Kharoṣṭhī script evolved gradually, or was the deliberate work of a single inventor. An analysis of the script forms shows a clear dependency on the Aramaic alphabet but with extensive modifications to support the sounds found in Indic languages. One model is that the Aramaic script arrived with the Achaemenid Empire's conquest of the Indus River (modern Pakistan) in 500 BC and evolved over the next 200+ years, reaching its final form by the 3rd century BC where it appears in some of the Edicts of Ashoka found in northwestern part of South Asia. However, no intermediate forms have yet been found to confirm this evolutionary model, and rock and coin inscriptions from the 3rd century BC onward show a unified and standard form.

The study of the Kharoṣṭhī script was recently invigorated by the discovery of the Gandhāran Buddhist texts, a set of birch bark manuscripts written in Kharoṣṭhī, discovered near the Afghan city of Hadda just west of the Khyber Pass in modern Pakistan. The manuscripts were donated to the British Library in 1994. The entire set of manuscripts are dated to the 1st century AD, making them the oldest Buddhist manuscripts yet discovered.

Kharosthi was added to the Unicode Standard in March, 2005 with the release of version 4.1.

Icon for Wikipedia links to pages in the Prakrit Languages