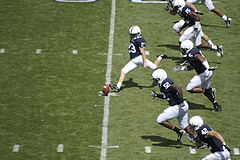 A kickoff is a method of starting a drive in American football and Canadian football. Typically, a kickoff consists of one team – the "kicking team" – kicking the ball to the opposing team – the "receiving team". The receiving team is then entitled to return the ball, i.e., attempt to advance it towards the kicking team's end zone, until the player with the ball is tackled by the kicking team, goes out of bounds, or scores a touchdown. Kickoffs take place at the start of each half of play, the beginning of overtime in some overtime formats, and after some scoring plays.

Common variants on the typical kickoff format include the onside kick, in which the kicking team attempts to regain possession of the ball; a touchback, which may occur if the ball is kicked into the receiving team's end zone; or a fair catch, in which a player on the receiving team asks to catch the ball without interference from the kicking team, waiving his entitlement to attempt a return rush. Additionally, penalties exist for various infractions such as a player violating his position restrictions prior to the kick (5-yard penalty), or if the ball goes out of bounds before touching a player (20 yards or placed at receiving team's 40-yard line, whichever is farther). 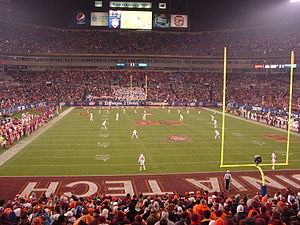 End zone view of a kickoff about to occur. The Florida State Seminoles, in garnet jerseys, at the far side of the field is about to kick to the Virginia Tech Hokies in white jerseys, in the foreground

A kickoff occurs at the start of each half and before each overtime (in the National and Arena Football Leagues). It is also traditionally decided by a coin toss at the beginning of each game carried out by the referee. The visiting team captain calls either heads or tails. The winner of the coin toss elects whether to take first choice in the first half or the second half. The captain with first choice then picks either a team to kick off or an end of the field to defend. The other captain chooses the remaining option. At the beginning of the second half, the two captains choose in the reverse order. If an overtime is required, another coin toss takes place to decide who gets first possession during the overtime. After a touchdown the scoring team kicks the ball off to the opposing team. In American football a field goal also results in a kickoff by the scoring team, but in Canadian football the scored-against team has an option of scrimmaging from their 35-yard line or receiving a kickoff.

The NFL has a special rule for after a team scores safety that is not in place in any other form of gridiron football. The team that scored the safety is also awarded possession of the ball. The team that gave up the safety is required to kick the ball off from its own twenty-yard line, referred to as a "free kick", and cannot use a kicking tee. Although this is not a requirement, most teams choose to punt the ball on the free kick (teams can also dropkick or placekick the ball). The same rules apply as on a normal kickoff, whereas the ball is a live ball if it travels at least ten yards without the receiving team fielding it. 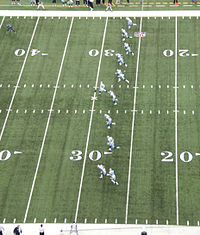 Dallas Cowboys kick-off during an NFL game. This picture was taken when the NFL kicked off from the 30-yard line, as it did from 1994 to 2010.

The line where the ball is placed for kickoff varies among the rule books. It is placed on the kicking team's 30-yard line in six-man football, 35-yard line in college and professional outdoor football, 40-yard line in American high school football, 45-yard line in amateur Canadian football, and the goal line in indoor and arena football. All players on the kicking team except the kicker (and, if used, a holder) must not cross the line at which the ball is placed until the ball is kicked. The receiving team must stay behind the line that is 10 yards from where the ball is placed. The ball can be fielded by the receiving team at any point after it has been kicked, or by the kicking team after it has traveled 10 yards or has been touched by a member of the receiving team. In American football (but not Canadian) touchback and fair catch rules apply to the kicked ball. If it is fielded by the kicking team, it is called an onside kick. A low, bouncing kick is called a squib kick. Although a squib kick typically gives the receiving team better field position than they would if a normal kick had been used, a squib kick is sometimes used to avoid giving up a long return, as well as use up a valuable amount of time on the clock, as it is impossible to fair catch such a kick. It is usually done when a team takes the lead in the final seconds, and is done to safely run out the remainder of the clock. Squib kicking with more than 20 seconds remaining has had unfortunate results (a line drive kick is more common when there are 20 to 50 seconds remaining; the typical hurry-up offense drive takes over a minute), but has been done by some teams.

File:Jason Hanson kickoff cropped.jpg
Jason Hanson of the Detroit Lions kicks off against the Minnesota Vikings in 2012

If the ball goes out of bounds without being touched by a player, the receiving team can choose either to have the ball moved back 5 yards and re-kicked, to take the ball 25 yards (25 yards under National Federation high school rules) past the spot of the kick (usually at their own 35-yard line), or to take the ball where it went out of bounds. However, on an onside kick, if the ball does not travel ten yards before the kicking team recovers the ball, they will take a 5-yard penalty and has the chance to kick another onside kick. If the onside kick goes less than 10 yards again, the receiving team will receive the ball at the spot the kicking team recovered it. However, if the receiving team touches the ball before it goes 10 yards, either team can recover it unpenalized.

Kickoffs into the end zone resulting in touchbacks became much more common in the NFL in 2011 as a result of a rule change. Whereas the kicking team previously kicked the ball off from their 30-yard line, the NFL moved the spot of the kickoff up 5 yards before the 2011 season. Only 16 percent of kickoffs in the 2010 season were touchbacks, but that jumped to almost 44 percent after the rule change.[1]

A video of a kickoff and return, played between the Baker Wildcats and Benedictine Ravens at Arrowhead Stadium, Kansas City, Missouri in 2014.

To receive a kickoff and set up a kickoff return, the receiving team sets up their players starting from 10 yards back from the point the ball is kicked from. There are usually one or two players positioned deep (around the goal line) that will attempt to catch or pick up the ball after it is kicked off by the opposing team's kicker. They will then attempt to carry the ball as far as possible upfield, without being tackled or running out of bounds. The other players are to block the kickoff team from getting to their kickoff returner.