Kill Bill is an American two-part martial arts film, as well as the fourth film written and directed by Quentin Tarantino. It was originally scheduled for a single theatrical release, but with a running time of over four hours, it was separated into two films: Kill Bill: Volume 1, released in late 2003, and Kill Bill: Volume 2, released in early 2004. The original four-hour cut, retitled Kill Bill: The Whole Bloody Affair, was screened at select cinemas in 2011.

Tarantino has discussed the possibility of a third Kill Bill film.[1][2][3]

The film follows a character initially identified as "The Bride," a former assassin seeking revenge on her ex-colleagues who massacred members of her wedding party and tried to kill her. 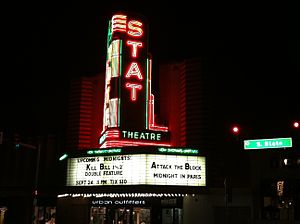 Kill Bill: Volume 2 was released in theaters on April 16, 2004. Volume 2's opening weekend gross was higher than Volume 1's, and the equivalent success confirmed the studio's financial decision to split the film into two theatrical releases.[7] Volume 2 attracted more female theatergoers than Volume 1, with 40% of the audience being female.[8]

Outside of the United States and Canada, Volume 2 was released in 20 territories over the weekend of April 23, 2004. It grossed an estimated $17.7 million and ranked first at the international box office, ending an eight-week streak held by The Passion of the Christ.[9] Volume 2 grossed a total of $66.2 million in the United States and Canada and $86 million in other territories for a worldwide total of $152.2 million.[10]

The film follows "The Bride" pursuing Bill's brother Budd and confronting Elle Driver, a fellow student of Pai Mei. She eventually catches up with Bill himself.

Tarantino announced at the 2008 Provincetown International Film Festival that a single film version of part 1 and 2 called Kill Bill: The Whole Bloody Affair with an extended animation sequence was to be released in May 2009.[11] Screenings of the complete film began on March 27, 2011 at the New Beverly Cinema.[12] This was verified to be the original print that premiered at the Cannes Film Festival in 2003,[13] before the decision was made to split the film into two parts due to the roughly four-hour length. The print shown at the New Beverly even retained the French subtitles necessary for screening an English-language film at the Cannes festival.

Differences in this version in comparison to the separate Vol. 1 and Vol. 2 versions include the following: the "old Klingon proverb" shown at the beginning of Vol. 1 is not present, although a dedication to filmmaker Kinji Fukasaku is in its place; the anime sequence is slightly longer with more gore; The House of Blue Leaves battle is in color (it had been toned down to black and white for the USA release of Vol. 1 only)[citation needed]; Sofie Fatale loses both of her arms; the revelation that The Bride's daughter is alive at the end of Vol. 1 is not present, nor is the short black and white scene at the beginning of Vol. 2 where The Bride is driving and sums up the action to that point; in its place is a small musical intermission that leads straight into Chapter 6.

Tarantino told Entertainment Weekly in April 2004, that he was planning a sequel:[14]

Oh yeah, initially I was thinking this would be my "Dollars Trilogy." I was going to do a new one every ten years. But I need at least fifteen years before I do this again. I've already got the whole mythology: Sofie Fatale will get all of Bill's money. She'll raise Nikki, who'll take on The Bride. Nikki deserves her revenge every bit as much as The Bride deserved hers.

According to Bloody-Disgusting.com, details emerged around 2007 about two possible sequels, Kill Bill: Volumes 3 and 4. According to the article, "Bennett Walsh said at the Shanghai International Film Festival, the third film involves the revenge of two killers whose arms and eye were hacked by Uma Thurman in the first stories". The article adds that the "fourth installment of the popular kung fu action films concerns a cycle of reprisals and daughters who avenge their mother's deaths."[15]

At the 2006 Comic Con, Tarantino said that after the completion of Grindhouse, he wanted to make two anime Kill Bill films. One will be an origin story about Bill and his mentors, and the other will be an origin starring The Bride. The latter is most likely to be a prequel, but could also follow the rumored (sequel) plot reported in Entertainment Weekly in April 2004.[16][17]

At the Morelia International Film Festival on October 1, 2009, while being interviewed on an Italian TV show after being asked about the success of the two Kill Bill films, Tarantino addressed the hostess by claiming, "You haven't asked me about the third one" then asking the woman to ask the question would he be making a third Kill Bill film, which he replied "Yes", and claiming "The Bride will fight again!"[18] On October 3, 2009, he further predicted that Kill Bill 3 would be his ninth film, and would be released in 2014.[19] He said he intends to make another unrelated film before that date as his eighth film (which would ultimately prove to be Django Unchained). He confirmed that he wanted ten years to pass between the Bride's last conflict, to give her and her daughter a period of peace.[20]

In December 2012, Tarantino said that a Kill Bill: Volume 3 was unlikely, and that he wishes to focus on other unrelated projects.[21] However, as of 2015, Tarantino announced that Kill Bill 3 remains a possibility: "We’ll see. Never say never. We’ll see when it comes to Kill Bill 3. Uma (Thurman) would really like to do it, we talk about it every once in a while."[22] Later that year, Tarantino added, "I put the character of Beatrix Kiddo through a lot, and so I wanted her to have this much time for peace," explaining that he wanted to give the character some downtime to spend with her daughter, "The whole idea [behind waiting so long between films] was everybody would be as old as they are."[23]