From Infogalactic: the planetary knowledge core
Jump to: navigation, search
For other uses, see Kiln (disambiguation). 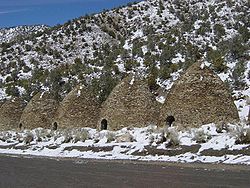 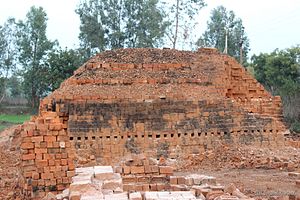 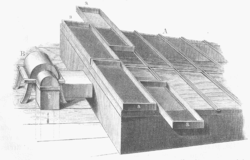 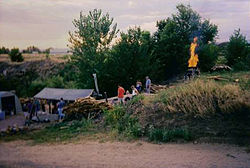 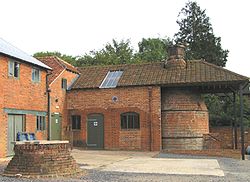 Farnham Pottery, Wrecclesham, Surrey with the preserved :bottle kiln: on the right of photo 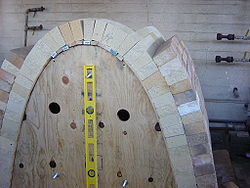 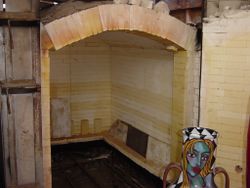 An empty, intermittent kiln. This specific example is a "car kiln"; the base is on wheels and has been rolled out of the kiln - this facilitates loading and unloading the kiln

A kiln is a thermally insulated chamber, a type of oven, that produces temperatures sufficient to complete some process, such as hardening, drying, or chemical changes. Various industries and trades use kilns to harden objects made from clay into pottery, tiles and bricks.[1] Various industries use rotary kilns for pyroprocessing—to calcinate ores, produce cement, lime, and many other materials.

The earliest known kiln dates to around 6000 BC, and was found at the Yarim Tepe site in modern Iraq.[2] Neolithic kilns were able to produce temperatures greater than 900 °C (1652 °F).[3] Uses include:

Kilns are an essential part of the manufacture of all ceramics. Ceramics require heat at high temperatures so chemical and physical reactions will occur to permanently alter the unfired body. In the case of pottery, clay materials are shaped, dried and then fired in a kiln. The final characteristics are determined by the composition and preparation of the clay body, by the temperature at which it is fired. After a first firing glazes may be used and the ware is fired a second time to fuse the glaze into the body. A third firing as a lower temperature may be required to fix overglaze decoration. Modern kilns often have sophisticated electrical control systems to firing regime, although pyrometric devices are often also used.

Clay consists of fine-grained particles, that are relatively weak and porous. Clay is combined with other minerals to create a workable clay body. Part of the firing process includes sintering. This heats the clay until the particles partially melt and flow together, creating a strong, single mass, composed of a glassy phase interspersed with pores and crystalline material. Through firing, the pores are reduced in size, causing the material to shrink slightly. This crystalline material is predominantly consists of silicon and aluminium oxides.

In the broadest terms, there are two types of kiln: intermittent and continuous, both sharing the same basic characteristics of being an insulated box with a controlled inner temperature and atmosphere.

A continuous kiln, sometimes called a tunnel kiln, is a long structure in which only the central portion is directly heated. From the cool entrance, ware is slowly transported through the kiln, and its temperature is increased steadily as it approaches the central, hottest part of the kiln. From there, it continues down the kiln and the surrounding temperature is reduced until it exits the kiln at near room temperature. A continuous kiln is energy-efficient, because heat given off during cooling is recycled to pre-heat the incoming ware. In some designs, the ware is left in one place, while the heating zone moves across it. Kilns in this type include:

In the intermittent kiln. the ware to be fired is placed into the kiln. The kiln is closed, and the internal temperature increased according to a schedule. After the firing is completed, both the kiln and the ware are cooled. The ware is removed, the kiln is cleaned and the next cycle begins. Kilns in this type include:[4]

Kiln technology is very old. The development of the kiln from a simple earthen trench filled with pots and fuel, pit firing, to modern methods happened in stages. One improvement was to build a firing chamber around pots with baffles and a stoking hole. This conserved heat. A chimney stack improves the air flow or draw of the kiln, thus burning the fuel more completely. Early examples of kilns found in Britain include those that made roof-tiles during the Roman occupation. These kilns were built up the side of a slope, such that a fire could be lit at the bottom and the heat would rise up into the kiln. 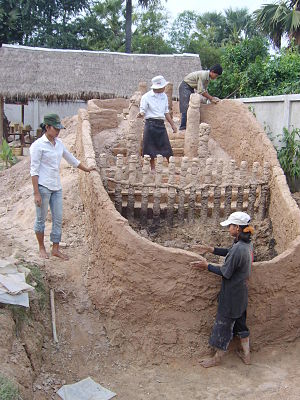 With the industrial age, kilns were designed to use electricity and more refined fuels, including natural gas and propane. Many large industrial pottery kilns use natural gas, as it is generally clean, efficient and easy to control. Modern kilns can be fitted with computerized controls allowing for fine adjustments during the firing. A user may choose to control the rate of temperature climb or ramp, hold or soak the temperature at any given point, or control the rate of cooling. Both electric and gas kilns are common for smaller scale production in industry and craft, handmade and sculptural work.

Green wood coming straight from the felled tree has far too high a moisture content to be commercially useful and will rot, warp and split. Both hardwoods and softwood must be left to dry out until the moisture content is between 18% and 8%. This can be a long process, or it is speeded up by use of a kiln. A variety of kiln technologies exist today: conventional, dehumidification, solar, vacuum and radio frequency.

Conventional wood dry
[5] are either package-type (side-loader) or track-type (tram) construction. Most hardwood lumber kilns are side-loader kilns in which fork trucks are used to load lumber packages into the kiln. Most softwood kilns are track types in which the timber (US. lumber) is loaded on kiln/track cars for loading the kiln. Modern high-temperature, high-air-velocity conventional kilns can typically dry 1-inch-thick (25 mm) green wood in 10 hours down to a moisture content of 18%. However, 1-inch-thick green Red Oak requires about 28 days to dry down to a moisture content of 8%.

Heat is typically introduced via steam running through fin/tube heat exchangers controlled by on/off pneumatic valves. Humidity is removed by a system of vents, the specific layout of which are usually particular to a given manufacturer. In general, cool dry air is introduced at one end of the kiln while warm moist air is expelled at the other. Hardwood conventional kilns also require the introduction of humidity via either steam spray or cold water misting systems to keep the relative humidity inside the kiln from dropping too low during the drying cycle. Fan directions are typically reversed periodically to ensure even drying of larger kiln charges.

Dehumidification kilns
are similar to other kilns in basic construction and drying times are usually comparable. Heat comes primarily from an integral dehumidification unit that also removes humidity. Auxiliary heat is often provided early in the schedule to supplement the dehumidifier.

Vacuum and radio frequency kilns
reducing the air pressure to attempt to speed up the drying process. A variety of these vacuum technologies exist, varying primarily in the method heat is introduced into the wood charge. Hot water platten vacuum kilns use aluminum heating plates with the water circulating within as the heat source, and typically operate at significantly reduced absolute pressure. Discontinuous and SSV (super-heated steam) use atmosphere pressure to introduce heat into the kiln charge. The entire kiln charge comes up to full atmospheric pressure, the air in the chamber is then heated and finally a vacuum is pulled as the charge cools. SSV run at partial-atmospheres, typically around 1/3 of full atmospheric pressure, in a hybrid of vacuum and conventional kiln technology (SSV kilns are significantly more popular in Europe where the locally harvested wood is easier to dry than the North American woods. RF/V (radio frequency + vacuum) kilns use microwave radiation to heat the kiln charge, and typically have the highest operating cost due to the heat of vaporization being provided by electricity rather than local fossil fuel or waste wood sources.

The economics of different wood drying technologies are based on the total energy, capital, insurance/risk, environmental impacts, labor, maintenance, and product degradation costs. These costs which can be a significant part of plant costs, involve the differential impact of the presence of drying equipment in a specific plant. Every piece of equipment from the green trimmer to the infeed system at the planer mill is part the "drying system". The true costs of the drying system can only be determined when comparing the total plant costs and risks with and without drying.

Kiln dried firewood was pioneered during the 1980s, this was later adopted extensively in Europe due to the economic and practical benefits of selling wood with a lower moisture content.[6] [7]

The total (harmful) air emissions produced by wood kilns, including their heat source, can be significant. Typically, the higher the temperature the kiln operates at, the larger amount of emissions are produced (per pound of water removed). This is especially true in the drying of thin veneers and high-temperature drying of softwoods.