Kimila Ann "Kim" Basinger (/ˈbeɪsɪŋər/ BAY-sing-ər, often mispronounced /ˈbæsɪndʒər/ BASS-in-jər; born December 8, 1953) is an American actress and former fashion model who has appeared in 38 feature films. She began her acting career on television in 1976 and made her film debut in the 1981 drama Hard Country. She won the Academy Award for Best Supporting Actress for her performance as Lynn Bracken in the 1997 film L.A. Confidential.

Basinger came to prominence playing Bond girl Domino Petachi in the 1983 film Never Say Never Again, opposite Sean Connery, and went on to receive a Golden Globe nomination for her role as Memo Paris in The Natural (1984). She also starred as Elizabeth in the controversial erotic drama 9½ Weeks (1986), and as Vicki Vale in Batman (1989). For her role in L.A. Confidential, she also won the Golden Globe for Best Supporting Actress and the SAG Award for Best Supporting Actress. Her other films include Final Analysis (1992), I Dreamed of Africa (2000), 8 Mile (2002), The Door in the Floor (2004), Cellular (2004), and the upcoming The Nice Guys (2016).

Basinger was born in Athens, Georgia, on December 8, 1953.[1] Her mother, Ann Lee (née Cordell), was a model, actress, and swimmer who appeared in several Esther Williams films.[1][2] Her father, Donald Wade Basinger, was a big band musician and loan manager; as a U.S. Army soldier, he landed in Normandy on D-Day.[3] The third of five children,[1] she has two brothers, James Michael "Mick" and Skip, and two sisters, Ashley and Barbara. Basinger's ancestry includes English, German, French, Swedish, and Scots-Irish.[4][5][6] She was raised a Methodist.[7] Her relationship with her parents was tenuous,[citation needed] and her father's critical nature affected her emotionally from a young age. She has said, "I just couldn't please him enough. He never complimented me ever. And I saw a lot of silence. Children always read into silence as something terrible."[1] Basinger has described herself as extremely shy and lonely during her childhood, and has stated that she faced many hardships during her school years as a result.[1][5]

Basinger studied ballet from about age three to her mid-teens. By her mid teens, she grew in confidence and successfully auditioned for the school cheerleading team.[1] When Basinger was 16, she started modeling, . At 17, she entered the America's Junior Miss Scholarship Pageant, won at the city level and was crowned Athens Junior Miss. Although she lost in the state pageant to Sue Whitted, who competed as "Georgia's Junior Miss, her beauty was profiled in the national program.[8] She had competed at the state level for the Breck Scholarship and was featured in an ad for Breck in a joint portrait with her mother. She was subsequently offered a modeling contract with the Ford Modeling Agency.[1] She turned it down in favor of singing and acting, and enrolled at the University of Georgia, but soon reconsidered and went to New York to become a Ford model.[1] Despite earning $1,000 a day, Basinger never enjoyed modeling, saying "It was very hard to go from one booking to another and always have to deal with the way I looked. I couldn't stand it. I felt myself choking."[1] Basinger has said that even as a model, when others relished looking in the mirror before appearing, she abhorred it and would avoid mirrors out of insecurity.[9] Not long after her Ford deal, Basinger appeared on the cover of magazines. She appeared in hundreds of advertisements throughout the early 1970s, most notably as the Breck Shampoo girl.[10] She alternated between modeling and attending acting classes at the Neighborhood Playhouse, as well as performing in Greenwich Village clubs as a singer.[11] 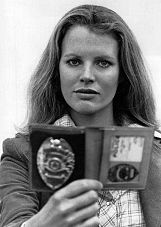 In 1976, after five years as a cover girl, Basinger quit modeling and moved to Los Angeles to act. After appearing in small parts on a few TV shows such as McMillan & Wife and Charlie's Angels,[12] her first starring role was in a made-for-TV movie, Katie: Portrait of a Centerfold (1978) in which she played a small town girl who goes to Hollywood to become an actress and winds up becoming a famous centerfold for a men's magazine.[13] She then appeared in the miniseries remake From Here to Eternity (1979) with Natalie Wood and William Devane.[13] Her feature debut was the critically well-received rural drama Hard Country (1981),[5] which she followed up with the adventure film Mother Lode (1982), which co-starred Charlton Heston.

Basinger's breakout role was as the Bond girl Domino Petachi in Never Say Never Again (1983), where she starred opposite Sean Connery.[5] To promote her role in the Bond film, Basinger posed for a famous nude pictorial for Playboy. Basinger stated that the Playboy appearance led to good opportunities, such as Barry Levinson's The Natural (1984), co-starring Robert Redford, for which she earned a Golden Globe nomination as Best Supporting Actress. Her most controversial appearance was in Adrian Lyne's erotic drama 9½ Weeks (1986) with Mickey Rourke,[14] which failed at the box office but quickly acquired a large fanbase on home video. Academy Award winning writer-director Robert Benton cast her in the title role for the film Nadine (1987). Several directors cast her twice in their films, including Blake Edwards for The Man Who Loved Women (1983) and Blind Date (1987) and Robert Altman for Fool for Love (1985) and Prêt-à-Porter (1994). The highest-grossing film of her career thus far was Tim Burton's 1989 blockbuster Batman,[15] where Basinger played the role of photojournalist Vicki Vale.[5]

In 1992, Basinger was a guest vocalist on a re-recorded version of Was (Not Was)'s "Shake Your Head", which also featured Ozzy Osbourne on vocals, and reached the UK Top 5.[16] That same year, she starred in the live-action/animated film, "Cool World" (directed by Ralph Bakshi), where she voiced/played Holli Would, a cartoon bombshell who longs to become a real human woman. The film marks her thus far only voice-acting role to date. In 1997, after a three-year hiatus from acting, Basinger made a comeback as the femme fatale in Curtis Hanson's neo-noir L.A. Confidential alongside Guy Pearce and Russell Crowe. She initially turned down the film twice, feeling an insecurity at returning to the screen and enjoying motherhood.[5][9] The role earned her an Academy Award for Best Supporting Actress, as well as the Golden Globe and Screen Actor's Guild Award. She holds the distinction of being the only actress who has both posed nude in Playboy and won an Academy Award. In a 2000 interview with Charlie Rose, Basinger said that L.A. Confidential and her next project, I Dreamed of Africa (2000), (where she played Kuki Gallmann) were the most pleasurable of her career and that the cast were all there for the right reasons.[9] She says that Vincent Pérez was the "most incredible actor she had ever worked with" and had the "biggest heart of anybody she has ever worked with."[9] 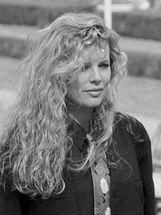 At the Deauville American Festival in France in 1989

Hanson cast her again, as Eminem's alcoholic mother in the hit film 8 Mile (2002). In 2004, Basinger starred opposite Jon Foster in The Door in the Floor, a drama with heavy sexual themes adapted from the novel A Widow for One Year by John Irving. She was next featured in the crime thrillers Cellular (2004) and The Sentinel (2006), and starred in the Lifetime original movie The Mermaid Chair (2006) as a married woman who falls in love with a monk. Her 2009 film, The Informers, premiered at the Sundance Film Festival in January 2009. Her next film, The Burning Plain, was screened at the Toronto International Film Festival in September 2008 and at the Savannah Film Festival in October 2008.[17]

Basinger's more recent work in the 2010s includes Charlie St. Cloud (2010) and Grudge Match (2013). She recently finished filming 4 Minute Mile for director Charles-Olivier Michaud, where she stars alongside Richard Jenkins, Kelly Blatz and Analeigh Tipton, and a German-Danish movie directed by Anders Morgenthaler, I Am Here. The latter work has been presented at the 2014 Hamburg Film Festival, held in September.

Basinger has received an Academy Award, a Golden Globe award (out of two nominations), a Screen Actors Guild Award (out of two nominations), an award from the National Board of Review of Motion Pictures, and an award from the Southeastern Film Critics Association. For her lifetime achievements in the cinematic arts, she received the Athena Award at the Kudzu Film Festival, and has two stars on the Hollywood Walk of Fame. She has also been nominated for the British Academy Film Awards, the People's Choice Awards, the Saturn Awards (three times) and the MTV Movie Awards (four times). 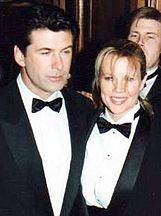 With Alec Baldwin at the 19th César Awards at the Théâtre du Châtelet in Paris, France, in February 1994

On October 12, 1980, Basinger married makeup artist Ron Snyder-Britton. They had met on the film Hard Country. Basinger filed for divorce on December 15, 1988[18] and it was finalized a year later.[19] Britton later wrote a memoir titled Longer Than Forever, published in 1998, about their time together.[20]

She met her second husband, Alec Baldwin, in 1990 when they played lovers in The Marrying Man, and they married on August 19, 1993. They appeared together in the remake of The Getaway (1994) and played themselves in a 1998 episode of The Simpsons, in which Basinger corrected Homer Simpson on the pronunciation of her last name and polished her Oscar statuette. Basinger and Baldwin have a daughter, Ireland Eliesse Baldwin (born October 23, 1995). They separated in December 2000 and divorced on February 3, 2002. In 2008, Baldwin wrote a book which dealt with the contentious custody battle with Basinger over their daughter.[21] Basinger developed agoraphobia some time after the birth of Ireland.[22]

Some family members recommended Basinger buy the bulk of the privately-owned land in the small town of Braselton, Georgia, some 1,691 acres in 1989 for US$20 million, to establish as a tourist attraction with movie studios and film festival.[23] However, she encountered financial difficulties and started to sell parts of it off in 1995.[24] The town is now owned by developer Wayne Mason. In a 1998 interview with Barbara Walters, Basinger admitted that "nothing good came out of it", because a rift resulted within her family.

Basinger's financial difficulties were exacerbated when she pulled out of the controversial film Boxing Helena (1993), resulting in the studio's winning a US$8.1 million judgment against her. Basinger filed for bankruptcy [25] and appealed the jury's decision to a higher court, which ruled in her favor. She and the studio settled for $3.8 million instead.[24]

Basinger is a vegetarian and an animal rights supporter. She has posed for anti-fur advertisements by PETA.[26]