King George County is a county located in the Commonwealth of Virginia. As of the 2010 census, the population was 23,584.[1] Its county seat is King George.[2]

The county's largest employer is the U.S. Naval Surface Warfare Center Dahlgren Division. It is adjacent to the two-lane, 2-mile long Harry W. Nice Memorial Bridge carrying U.S. Highway 301 over the Potomac River. It contains the ZIP codes 22448 (Dahlgren) and 22485 (all other areas within King George). It is within the area code 540 and contains the exchanges: 775, 644, 663, and 653.

Indigenous peoples of varying cultures lived along the waterways for thousands of years before Europeans arrived. Among the historic Native American tribes who came into conflict with the English were the Algonquian-speaking Nanzatico. In 1704 colonists retaliated for the tribe's attacking the farm of John Rowley, "known for his disputes" with them. They captured and shipped 40 people, including children older than 12, to Antigua in the Caribbean, where they were sold into slavery.[3]

King George County was established in 1720 when land was split from Richmond County, Virginia. The county is named for King George I of Great Britain.[4] It was substantially reorganized in 1776 and 1777, with land swapped with both Stafford and Westmoreland Counties to form the modern boundaries.

On March 16, 1751, James Madison, the fourth President of the United States, was born in Port Conway in southern King George County at Belle Grove plantation, the childhood home of his mother, Eleanor Rose "Nellie" Conway, the daughter of its owner, Francis Conway, for whom Port Conway was named. Two-time Governor of Virginia, William "Extra Billy" Smith, was born at Marengo in 1797.

On May 1, 1861 during the American Civil War, Confederates installed artillery at Mathias Point in order to blockade the Potomac River. On June 27, the steamer Thomas Freeborn bombarded Mathias Point in an attempt to drive away the soldiers who were manning the weapons. Confederate soldiers fired back from Mathias Point, striking and mortally wounding Commander James H. Ward of the Freeborn, who became the first Union naval officer to die in the Civil War. 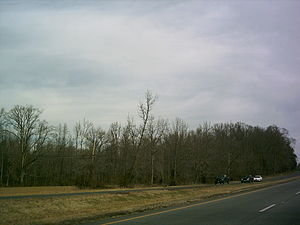 While trying to elude Union cavalry, John Wilkes Booth and David Herold crossed into the county from Maryland on April 21, 1865 after assassinating US president Abraham Lincoln. Booth and Herold landed at the mouth of Gambo Creek, before meeting with Confederate agents, who guided their passage to Port Conway, where they would cross into Port Royal, in Caroline County, Virginia.

King George County is located on the Northern Neck and is bounded on the north by the Potomac River, which lies in Charles County, Maryland. It is bounded on the south by the Rappahannock River across which lie Caroline and Essex Counties; on the east by Westmoreland County and on the west by Stafford County.

Clerk of the Circuit Court: Charles V. "Vic" Mason (I)

Commissioner of the Revenue: Jo Ann Hall Ando (I)

Commonwealth's Attorney: Keri A. Gusmann (I)

The King George Fall Festival is held the second weekend of October in King George. All proceeds from this event go to support the Volunteer King George Fire & Rescue. DECA (an organization of marketing students) at King George High School is a member of this committee and volunteers at this weekend event.