From Infogalactic: the planetary knowledge core
Jump to: navigation, search
This article is about the monarchic or divine title. For other uses, see King of Kings (disambiguation).

King of Kings is a title that has been used by several monarchies and empires throughout history. The title originates in the Ancient Near East. It is sometimes used as the equivalent of the later title Emperor.

The first king known to use the title "king of kings" (šar šarrāni) was Tukulti-Ninurta I of Assyria (13th century BC). The title used to be intended quite literally, as a šar or mlk was the title of a king of a city-state, and with the formation an empire in the Late Bronze Age, the Assyrian rulers installed themselves as rulers over the existing structure of rulers (kings) of city-states.[1]

The Persian title of a king of kings is shahanshah /ˈʃɑːənˈʃɑː/,[2] associated especially with Zoroastrian Persian Achaemenid Empire, where it referred to the monarch ruling over other monarchs who had a vassal, tributary or protectorate position.

The title is mentioned in the Hebrew Bible, as מלך מלכיא, applied to Nebuchadnezzar and to Artaxerxes. In Daniel 2:37, Daniel interprets the dream of Nebuchadnezzar to the effect that

"Thou, O king, [art] a king of kings: for the God of heaven hath given thee a kingdom, power, and strength, and glory."

The Emperors of Ethiopia had the title of "king of kings" (nəgusä nägäst).

In Judaism, "King of Kings" – in Hebrew Melech ha-M'lachim – is an expression that refers to God, whose name may not be said. It is usually rendered as Melech Malchei Ha-M'lachim (the King of the King of Kings), to put it one step above the title by which Babylonian and Persian kings are referred to in the Bible (specifically in the Book of Daniel). 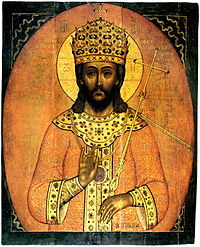 Jesus is called the "King of Kings" thrice in the New Testament: in 1 Timothy 6:15, Revelationn 17:14 and Revelation 19:16. Jesus says in Matthew 28:18 that all authority in heaven and on earth has been given to him. In John 18:36, he says that "my kingdom is not of this world." Thus, it is commonly accepted that the title "King of Kings" is awarded to Jesus as the ruler over a temporal, spiritual or "higher" kingdom. While not universally accepted by all Christians, it is important to note that a common Christian belief that their Lord, Jesus Christ is the living embodiment of God Almighty, affording him title of "Supreme and Ultimate Ruler of the Universe".

Selivanov, the co-founder of the Skoptsi, a Russian Pseudo-Christian sect which practiced sexual mutilation, who proclaimed himself the Son of God incarnate in the person of Emperor Peter III, claimed the titles "King of Kings" and even "God of Gods".

In Islam, the term "King of Kings" is reserved for Allah (meaning God, literally translated as "he who is being worshiped") and is prohibited as a description for a human being. This is to maintain a clear distinction between the created being and his or her Creator. Narrated in Sahih Bukhari and Muslim, from Abu Hurairah that Muhammad said, "Verily, the worst title is 'King of Kings'; there is no King that has absolute power except Allah". The term "al-Malik" (The King) is the 4th of the 99 known names of Allah, taken to imply 'The Sovereign Lord, The One with the complete Dominion, the One Whose Dominion is clear from imperfection' singles the only God out as supreme ruler over all earthly powers. The 84th known name of Allah is "Malik Al-Mulk" (King of the Realm), taken to mean 'The Eternal Owner of Sovereignty, The One who controls the Dominion and gives dominion to whoever He willed'.

In India the terms used for Hindu kings to represent king of kings include Rajadhi raja, chakravarthi, Maharaja, Perarasu,etc..

In the Pali Tripitaka, Buddha is sometimes compared to the worldly Emperor (Chakravarti), the Universal King, or the secular "King of Kings". But Buddha is also seen as the "King of the Dharma" or Dharma-raja.

The title shahanshah was revived by the Pahlavi dynasty of Persia in the 20th century. It was abolished when the Islamic Revolution toppled the monarchy in Iran.[3]

Tigranes II, more commonly known as Tigranes the Great (140 – 55 BC) was emperor of Armenia under whom the country became, for a short time, the strongest state east of the Roman Republic. Tigranes the Great never appeared in public without having four kings attending him. Cicero, referring to his success in the east, said that he "made the Republic of Rome tremble before the prowess of his arms." Under his reign, the Armenian kingdom expanded beyond its traditional boundaries, allowing Tigranes to claim the title Great King or King of Kings, and involving Armenia in many battles against opponents such as the Parthian and Seleucid empires, and the Roman Republic. He was called "Tigranes the Great" by many Western historians and writers, such as Plutarch.[4]

In India, Raja (which means king in Sanskrit) was a title used commonly by kings ruling small territories. Maharaja (from mahat "great" and rājan "king") was used only for kings who ruled a considerably large region with minor tributary kings under them. In regions like Rajasthan (rājan "king" and from sthan "land, place") and the Maratha Empire, which had many powerful kings ruling part of a larger empire, the founder of the empire was called Rajadhiraja (meaning King of the kings). Maharajadhiraja (from maha "great" or "high" and Rajadhiraja means "King of the kings") was used only for many most powerful kings of kings ruled a part of a considerably largest empire with major tributary kings of kings. In South India the greatest Chera dynasty, Chola dynasty and Pandyan Dynasty Kings were called as "Perarasu" (which means Greatest rulers in Tamil) and also as "chakkravarthi", or "Universal King" .

A notable use of term King of Kings comes from Donations of Alexandria ceremony in 34BC, where Caesarion, son of Julius Caesar and Cleopatra VII, was proclaimed as King of Kings, also as a status of a god and son of god.[5] Alexander the Great had the title: "Basileus ton Basilion" meaning king of kings. This title was likely given to him to imply that he was a successor of the Persian kings who had the same title.

Muammar Gaddafi of Libya claimed to be 'King of Kings,' a title he subsequently had a gathering of African tribal chiefs endorse in 2008.[6] More "than 200 African kings and traditional rulers...bestowed the title 'king of kings' on Libyan leader Muammar Gaddafi" during a meeting "in the Libyan town of Benghazi in what was billed as a first of its kind. Gaddafi urged the royals to join his campaign for African unity....'We want an African military to defend Africa, we want a single African currency, we want one African passport to travel within Africa,' Gaddafi told the assembled dignitaries, who come from countries such as Mozambique, South Africa, Ivory Coast and the Democratic Republic of Congo."

The traditional title of the Ethiopian kings from the Solomonic era onwards was "niguse negest", an ancient Ge'ez formula that translates as "King of Kings". Local variations of the title were also held by the rulers of the imperial realms of Mali in West Africa, Asanteman, also in West Africa, and Zululand in Southern Africa.

WWE wrestler Triple H is also dubbed as "The King of Kings", and uses the Motörhead song "King of Kings" in his ring entrances.

In The Simpsons episode "A Star Is Burns", an actor starring in Mr. Burns' movie "A Burns for All Seasons" referred to him as being truly "The King of Kings".

According to Celtic football fans, Henrik Larsson is the one true King of Kings.[7]

In the movie 300, King Xerxes I referred to himself as King of Kings.

In Percy Shelley's sonnet, Ozymandias, Ozymandias refers to himself as "King of Kings" on line 10.

In Family Guy episode "Jesus, Mary and Joseph!", Jesus is referred as "King of Kings"

In The Transformers, the character Abdul Fakkadi is the self-professed Supreme Military Commander, President-for-Life, and King of Kings of the Socialist Democratic Federated Republic of Carbombya.