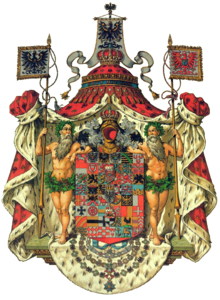 Coat of arms of the Kingdom of Prussia

The monarchs of Prussia were members of the House of Hohenzollern who were the hereditary rulers of the former German state of Prussia from its founding in 1525 as the Duchy of Prussia. The Duchy had evolved out of the State of the Teutonic Order, a Roman Catholic crusader state and theocracy located along the eastern Baltic Sea coast. The Teutonic Knights were under the leadership of a Grand Master, the last of whom, Albert, converted to Protestantism and secularized the lands which became the Duchy of Prussia. The Duchy was initially a vassal of the Kingdom of Poland, as a result of the terms of the Prussian Homage whereby Albert was granted the Duchy as part of the terms of peace following the Prussian War. When the main line of Prussian Hohenzollerns died out in 1618, the Duchy passed to a different branch of the family, who also reigned as Electors of Brandenburg in the Holy Roman Empire. While still nominally two different territories, Prussia under the suzerainty of Poland and Brandenburg under the suzerainty of the Holy Roman Empire, the two states are known together historiographically as Brandenburg-Prussia. Following the Second Northern War, a series of treaties freed the Duchy of Prussia from any vassalage to any other state, making it a fully sovereign Duchy in its own right. This complex situation (where the Hohenzollern ruler of the independent Duchy of Prussia was also a subject of the Holy Roman Emperor as Elector of Brandenburg) laid the eventual groundwork for the establishment of the Kingdom of Prussia in 1701. For diplomatic reasons, the rulers of the state were known as the King in Prussia from 1701 to 1772; largely because they still owed fealty to the Emperor as Electors of Brandenburg, the "King in Prussia" title (as opposed to "King of Prussia") avoided offending the Emperor. As the Prussian State grew through several wars and diplomatic moves throughout the 18th century, it became apparent that Prussia, and not the putative Holy Roman Empire, was the most powerful German state. By 1772, the pretense was dropped and the style "King of Prussia" was adopted. Thus it remained until 1871, when in the aftermath of the Franco-Prussian War, the King of Prussia Wilhelm I was crowned German Emperor. From that point forward, though the Kingdom of Prussia retained its status as a constituent state of the German Empire, all remaining Kings of Prussia also served as German Emperor, and that title took precedence.

Pretenders to the Throne of Prussia (1918–present)

Main article: Line of succession to the former German throne