The Kingdom of Arles (Arelat) or Second Kingdom of Burgundy was a Frankish dominion established from lands of the early medieval Kingdom of the Burgundians in 933 by the merger of the kingdoms of Upper and Lower Burgundy under King Rudolf II.

The new kingdom was named after the Lower Burgundian residence at Arles. Its territory stretched from the Mediterranean Sea to the High Rhine in the north, roughly corresponding to the present-day French regions of Provence-Alpes-Côte d'Azur, Rhône-Alpes and Franche-Comté, as well as western Switzerland. It was ruled by independent kings until 1032,[1] after which it was incorporated into the Holy Roman Empire.

Since the conquest of the First Burgundian kingdom by the Franks in 534, its territory had been ruled within the Frankish and Carolingian Empire. In 843, the three surviving sons of Emperor Louis the Pious, who had died in 840, signed the Treaty of Verdun which partitioned the Carolingian Empire between them: the former Burgundian kingdom became part of Middle Francia, which was allotted to Emperor Lothair I (Lotharii Regnum), with the exception of the later Duchy of Burgundy—the present-day Bourgogne—, which went to Charles the Bald, king of West Francia. King Louis the German received East Francia, comprising the territory east of the Rhine River.

Shortly before his death in 855, Emperor Lothair I in turn divided his realm between his three sons in accordance with the Treaty of Prüm. His Burgundian heritage would pass to his younger son Charles of Provence (845-863). Then in 869 Lothair I's son, Lothair II, died without legitimate children, and in 870 his uncle Charles the Bald and Louis the German by the 870 Treaty of Meerssen partitoned his territory: Upper Burgundy, territory north of the Jura mountains (Bourgogne Transjurane), went to Louis the German, while the rest went to Charles the Bald. By 875 all sons of Lothair I had died without heirs and the other Burgundian territories were held by Charles the Bald. 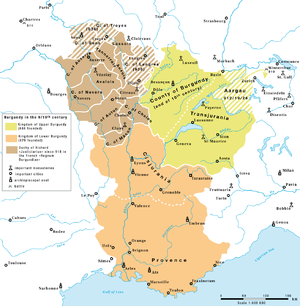 The three parts of the old Kingdom of Burgundy, c. 900:
Upper Burgundy
Lower Burgundy
Duchy of Burgundy under Richard the Justiciar

In the confusion after the death of Charles' son Louis the Stammerer in 879, the West Frankish count Boso of Provence established the Kingdom of Lower Burgundy (Bourgogne Cisjurane) at Arles. In 888, upon the death of the Emperor Charles the Fat, son of Louis the German, Count Rudolph of Auxerre, Count of Burgundy, founded the Kingdom of Upper Burgundy at Saint-Maurice which included the County of Burgundy, in northwestern Upper Burgundy.

In 993 Conrad was succeeded by his son Rudolph III, who in 1006 was forced to sign a succession treaty in favor of the future Emperor Henry II. Rudolph attempted to renounce the treaty in 1016 without success.

In 1032, Rudolph III died without any surviving heirs, and the kingdom passed in accordance with the 1006 treaty to Henry's successor, Emperor Conrad II from the Salian dynasty, and Arelat was incorporated in the Holy Roman Empire, though the kingdom operated with considerable autonomy.[1] Though from that time the Emperors held the title "King of Arles", few went to be crowned in the cathedral of Arles. An exception was Emperor Frederick Barbarossa who in 1178 was crowned King of Burgundy by the Archbishop of Arles.

Between the 11th century and the end of the 14th century, several parts of Arelat's territory broke away: Provence, Vivarais, Lyonnais, Dauphiné, Savoy, the Free County of Burgundy, and parts of western Switzerland.[1] The Free County of Burgundy was acquired by the Imperial House of Hohenstaufen in 1190 and the eastern parts of Upper Burgundy fell to the House of Zähringen. Later, when the Zähringen line died out, these lands were inherited by the Habsburgs. Most of the territory of Lower Burgundy was progressively incorporated into France — the County of Provence fell to the House of Anjou in 1246 and finally to the French crown in 1481, the Dauphiné was annexed and sold to the French king Charles V of Valois in 1349 by the dauphin de Viennois Humbert II de La Tour-du-Pin. In 1361, Emperor Charles IV of Luxembourg detached the County of Savoy from the Burgundian kingdom.

In 1365, Charles was the last emperor to be crowned King of Arles. In 1378, Charles appointed the Dauphin of France (later King Charles VI of France) as permanent Imperial vicar to administer nominally on behalf of the Empire what remained of Arelat, and from then on Arelat in effect ceased to exist. However, the title "King of Arles" remained one of the Holy Roman Emperor's subsidiary titles until the dissolution of the Empire in 1806, and the office of the Archbishop of Trier continued to act as an archchancellor and prince-elector for the King of the Romans (the designated future Holy Roman Emperor), a status that was confirmed by the Golden Bull of 1356.

Despite the title's permanent union with that of King of the Romans, the Arelat was considered for reconstitution as a separate state several times. The most serious occasion was under Pope Nicholas III and sponsored by Charles of Anjou. Between 1277 and 1279, Charles, at that time already King of Naples, Rudolf of Habsburg, King of the Romans and aspirant to the Imperial crown, and Margaret of Provence, Queen-Mother of France, settled their dispute over the County of Provence, and also over Rudolf's bid to become the sole Imperial candidate. Rudolf agreed that his daughter Clemence of Austria would marry Charles's grandson Charles Martel of Anjou, with the whole Arelat as her dowry. In exchange, Charles would support the imperial crown being made hereditary in the House of Habsburg. Pope Nicholas expected Northern Italy to become a kingdom carved out of the Imperial territory and be given to his family, the Orsini. In 1282, Charles was ready to send the child couple to reclaim the old royal title of Kings of Arles, but the War of the Sicilian Vespers frustrated his plans. [2]