The Kingdom of Bosnia (Bosnian, Croatian, and Serbian: Bosansko kraljevstvo, Босанско краљевство) was a medieval kingdom that evolved from the Banate of Bosnia (1154–1377). Its extensive, region-wide socio-economic, political and cultural influence was of great effect in the later development of medieval Balkan states, and Balkan history in general.[1][page needed] Bosnia enjoyed de facto independence in the 13th and 14th centuries despite nominal subjection to Hungary. Its difficult terrain and remoteness enabled the Bosnians to maneuver between their two powerful neighbors, Hungary and Serbia, usually managing to avoid subordination to either. Several capable rulers allowed Bosnia briefly to play the role of a great power in the 14th century. After 1290, Bosnia enjoyed virtual independence from Hungary and gained significant territory in Dalmatia at Serbia's expense. King Tvrtko I (reigned 1353–91) acquired portions of western Serbia and most of the Adriatic coast south of the Neretva river, and during the latter part of his reign, Bosnia briefly became the strongest nation in the Balkans peninsula. However, local separatism remained strong in Bosnia, and after his death the country lost its predominance. The Ottoman Empire annexed portions of eastern Bosnia in the 1440s and 1450s, and went on to conquer Herzegovina until the last fortress fell in 1481.[2]

The Banate of Bosnia was a medieval state comprising at its peak most of what is today Bosnia and Herzegovina, as well as parts of Dalmatia (in Croatia), Serbia and Montenegro. Although nominally in vassalage to the Kingdom of Hungary, Bosnia was a de facto independent state.[3][4][5] The Banate of Bosnia existed until 1377, when it was elevated into a kingdom with the coronation of Tvrtko I.

See also: Bosnia and Herzegovina in the Middle Ages

By the mid-14th century, Bosnia reached its peak under Ban Tvrtko I of the House of Kotromanić, who was officially crowned on 26 October 1377. By having done so, he became a ruler of the newly proclaimed Kingdom of Bosnia, a state that followed the Banate of Bosnia. At its peak the Kingdom became one of the most influential and powerful states in the Balkan peninsula prior to Ottoman conquest.

Throughout the Middle Ages, Herzegovina was made up of several smaller polities: Zahumlje (Hum), centered around the town of Blagaj, and Travunia, centered on the town of Trebinje. These statelets were in periods ruled by semi-independent princes, mostly under suzerainty of the Serbian medieval monarchy. Their territories included modern Herzegovina and parts of Montenegro and southern Dalmatia. The name Herzegovina was adopted when Stjepan Vukčić Kosača, the "Duke of St. Sava" asserted its independence in 1435–48. The assembly of these noblemen was called stanak and was quite influential. 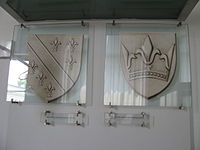 Coat of arms of Bosnia for Tvrtko I of Bosnia (left)

Bosnia reached its peak under Ban Tvrtko I, a member of the Kotromanić dynasty, who came to power in 1353. In 1372, Tvrtko formed an alliance with Prince Lazar Hrebeljanović, one of the regional lords in the territory of the disintegrated Serbian Empire.[6] The next year, Tvrtko and Lazar attacked the domain of Nikola Altomanović, who was the most powerful Serbian noble at the time. After defeating Altomanović, they divided his lands, except for his littoral districts of Dračevica, Konavle, and Trebinje, which were seized by Đurađ I Balšić, the Lord of Zeta. Tvrtko received parts of Zahumlje, the upper reaches of the Drina and Lim rivers, as well as the districts of Onogošt and Gacko. This acquisition included the important Serbian Orthodox monastery of Mileševa (which held the relics of Saint Sava, the first Serbian Archbishop).[7]

In 1377, Tvrtko took the littoral districts from Balšić. That year, on 26 October, he was crowned King of 'Serbia, Bosnia, the Primorje (Seaside), and the western lands'.[8] The acquisition of Serbian territory, including the important Monastery of Mileševa, combined with the fact that Tvrtko's grandmother had been a member of the Nemanjić dynasty prompted Tvrtko into also having himself crowned 'King of Serbia' thus asserting his pretensions to the Serbian throne. This was made possible by the royal Nemanjić line having died out with Uroš in 1371.[7] The crown was sent to him by Hungarian king Louis of Anjou. According to plurality of recent works, in historiography represented by scholars like Čošković, Anđelić, Lovrenović, Filipović, ceremony itself was conducted in Mile near Visoko in the church which was built in time of Stephen II Kotromanić's reign, where he was also buried alongside his uncle Stjepan II.[9][10][11] In contrast, some earlier historiographers, mostly represented by scholars from Serbia, consider that he was crowned in the Orthodox Monastery of Mileševa,[12] by the Metropolitan of Mileševa.[9][13]

However, after the defeat of Nikola Altomanović, Prince Lazar had emerged as the most powerful lord on the territory of the former Serbian Empire.[14] He wanted to reunite the Serbian state, and the Serbian Orthodox Church saw him as most fitted to succeed the Nemanjić dynasty. The Church, which was the strongest cohesive force among the Serbs at the time, did not support Tvrtko's aspirations in this regard.[15]

By 1390, Tvrtko I expanded his realm to include a part of Croatia and Dalmatia, and expanded his title to King of Rascia, Bosnia, Dalmatia, Croatia and the Littoral.[citation needed] Tvrtko's full title listed subject peoples and geographical dependencies, following the Byzantine norm. At the peak of his power, he was "King of Bosnia, Serbia, Croatia, Hum, Usora, Soli, Dalmatia, Donji Kraji".

After the death of Tvrtko I, the power of the Bosnian state slowly faded in power and influence. The Ottoman Empire had already started its invasion of Europe and posed a major threat to the Balkans throughout the first half of the 15th century. Finally, under King Stjepan Tomašević, betrayed and left to fend for itself by other European powers, Bosnia officially fell in 1463 and became the westernmost province of the Ottoman Empire. Herzegovina province fell to the Empire in 1482. It took another century for the western parts of today's Bosnia to succumb to Ottomans. After the fall of the kingdom, Catherine of Bosnia escaped to Rome on horses by fooling the Ottomans in which way she went. She stated that she was leaving the country to see her sons or to the visit the Holy See.

The religion of the original population of Bosnia and Herzegovina was mixed: there were Catholic and Orthodox Christians, but most of the indigenous population simply called themselves Bosnians (or "Bošnjani"),[16] belonging to the so-called Bosnian Church.[17] The majority of knowledge on this church comes from outside non-adherent sources and its exact nature is a subject of much scholarly debate, particularly around its possible dualist teachings. It was accused by the Catholic and Orthodox authorities of heresy and being linked to the Bogomils (Patarenes).[17]

The bans and kings of Bosnia were Catholics during their reign,[citation needed] except for Stjepan Ostoja who showed some interest in the Bosnian Church while he was on the throne. There were, however, several important noblemen who were "Krstjani" (or "Christians"), such as Hrvoje Vukčić, the Radenović-Pavlović family, Sandalj Hranić, Stjepan Vukčić, and Paul Klešić. It was common for the Holy See to have the Bosnian rulers renounce any relation to the Bosnian Church or even perform conversions, in return for support.