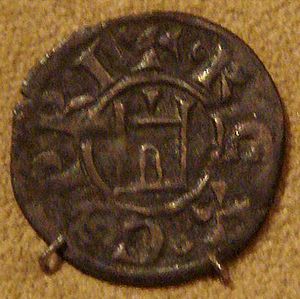 Coin of the kingdom of Cyprus, 13th century. 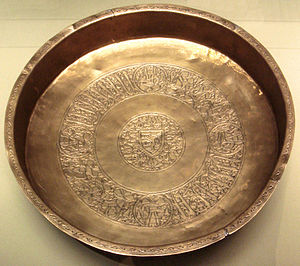 Plate of the House of Lusignan, with coat of arms at the center. Early 14th century, Cyprus. Louvre Museum.

The Kingdom of Cyprus was a Crusader kingdom on the island of Cyprus in the high and late Middle Ages, between 1192 and 1489. It was ruled by the French House of Lusignan. It comprised not only Cyprus, but also some possessions on the Anatolian mainland: Antalya between 1361 and 1373 and Corycus between 1361 and 1448.

The island was conquered in 1191 by King Richard I of England during the Third Crusade, from Isaac Komnenos, an upstart local governor and self-proclaimed emperor claiming the Byzantine Empire. The English king had not originally intended to conquer the island, however when his invading fleet was scattered by a storm en route to the siege of Acre, three of his ships were driven to the shores of Cyprus, where they were wrecked and sank in sight of the port of Limassol.[1] The shipwrecked survivors were consequently taken prisoners by Komnenos and when a ship bearing Richard’s sister Joan and bride Berengaria entered the port, Komnenos refused their request to disembark for water.[2] Richard and the rest of his fleet arrived shortly afterwards and upon hearing of the imprisonment of his shipwrecked comrades and the insults offered to his bride and sister, decided to meet Komnenos in battle. There were even rumours that Komnenus was secretly in league with Saladin in order to protect himself from his enemies in the Byzantine capital of Constantinople, the ruling Angelos family.[1] Moreover, control of the island of Cyprus would provide a highly strategic base of operations from which to launch and supply further Crusade offensives. The English army disembarked on the shores of Limassol and engaged the Cypriots who proved no match for the English archers and heavily armoured knights. The fall of night enabled Komnenos to escape to the hills with the remainder of his army, however Richard and his troops tracked the Cypriot ruler down and raided his camp before dawn; Komnenos managed to escape again with only a few men and the next day, many Cypriot nobles came to Richard to swear fealty.[1] In the following days, Komnenos must have realised all was lost and subsequently made an offer of 20,000 marks of gold and 500 men-at-arms to Richard, and also promised to surrender his daughter and castles as a pledge for his good behaviour.[1]

Fearing treachery at the hands of the new invaders however, Komnenos fled after making this pledge to Richard and escaped to the stronghold of Kantara. Some weeks after Richard’s marriage to his bride on 12 May 1191, Isaac planned an escape by boat to mainland, but was apprehended in the abbey of Cape St. Andrea at the eastern point of the island and later imprisoned in the castle of Markappos in Syria, where he died shortly afterwards in captivity.[1] Richard meanwhile began to resume his journey to Acre and, with much needed respite, new funds and reinforcements, set sail for the Holy Land accompanied by the King of Jerusalem, Guy of Lusignan, and various other high ranking nobles of the Western Crusader states. The English king left garrisons in the towns and castles of the island before he departed and the island itself was left in charge of Richard of Camville and Robert of Tornham.[3] A subsequent revolt after Richard left for the Holy Land caused him to doubt the island as a worthwhile gain and eventually prompted him to sell the territory to the Knights Templar .

The English invasion of Cyprus marked the beginning of 400 years of Western dominance on the island and the introduction of the feudal system of the Normans. It also brought the Latin church to Cyprus, which had hitherto been Orthodox in religion.

When Richard I of England realised that Cyprus would prove to be a difficult territory to maintain and oversee whilst launching offensives in the Holy Land, he sold it to the Knights Templar for a fee of 100,000 bezants, 40,000 of which was to be paid immediately, while the remainder was to be paid in installments.[1] One of the greatest military orders of medieval times, the Knights Templar were renowned for their remarkable financial power and vast holdings of land and property throughout Europe and the East, and their severity of rule in Cyprus quickly incurred the hatred of the native population. On Easter Day in 1192, the Cypriots attempted a massacre of their Templar rulers, however due to prior knowledge of the attack and limited amounts of troops, the Knights had taken refuge in their stronghold at Nicosia. A siege ensued and the Templars, realising their dire circumstances and their besiegers’ reluctance to bargain, sallied out into the streets at dawn one morning, taking the Cypriots completely by surprise. The subsequent slaughter was merciless and widespread and though Templar rule was restored following the event, the military order was reluctant to continue rule and allegedly begged Richard to take Cyprus back. Richard took them up on the offer and the Templars returned to Syria, retaining but a few holdings on the island.[4] A small minority Roman Catholic population of the island was mainly confined to some coastal cities, such as Famagusta, as well as inland Nicosia, the traditional capital. Roman Catholics kept the reins of power and control, while the Orthodox inhabitants lived in the countryside; this was much the same as the arrangement in the Kingdom of Jerusalem. The independent Eastern Orthodox Church of Cyprus, with its own archbishop and subject to no patriarch, was allowed to remain on the island, but the Latin Church largely displaced it in stature and holding property.

In the meantime, the hereditary queen of Jerusalem, Sybilla, had died and opposition to the rule of her husband, Guy of Lusignan, greatly increased to the point that he was ousted from his claim to the crown of Jerusalem.[1] Being a long-time vassal of King Richard, the English king looked to strike two birds with one stone; by offering Guy de Lusignan the kingdom of Cyprus, he allowed his friend the opportunity to save face and keep some sort of power in the East whilst simultaneously ridding himself of a troublesome fief. It is unclear whether Richard gave him the territory or sold it and it is highly unlikely that Richard was ever paid even if a deal was struck.[1] In 1194, Guy de Lusignan died without any heirs and so his older brother, Amalric, became King Amalric I of Cyprus, a crown and title which was approved by Henry VI, the Holy Roman Emperor.[1]

After the death of Amalric of Lusignan, the Kingdom continually passed to a series of young boys who grew up as king. The Ibelin family, which had held much power in Jerusalem prior its downfall, acted as regents during these early years. In 1229 one of the Ibelin regents was forced out of power by Frederick II, Holy Roman Emperor, who brought the struggle between the Guelphs and Ghibellines to the island. Frederick's supporters were defeated in this struggle by 1233, although it lasted longer in the Kingdom of Jerusalem and in the Holy Roman Empire. Frederick's Hohenstaufen descendants continued to rule as kings of Jerusalem until 1268 when Hugh III of Cyprus claimed the title and its territory of Acre for himself upon the death of Conrad III of Jerusalem, thus uniting the two kingdoms. The territory in Palestine was finally lost while Henry II was king in 1291, but the kings of Cyprus continued to claim the title.

Like Jerusalem, Cyprus had a Haute Cour (High Court), although it was less powerful than it had been in Jerusalem. The island was richer and more feudal than Jerusalem, so the king had more personal wealth and could afford to ignore the Haute Cour. The most important vassal family was the multi-branch House of Ibelin. However, the king was often in conflict with the Italian merchants, especially because Cyprus had become the centre of European trade with Africa and Asia after the fall of Acre in 1291.

The kingdom eventually came to be dominated more and more in the 14th century by the Genoese merchants. Cyprus therefore sided with the Avignon Papacy in the Great Schism, in the hope that the French would be able to drive out the Italians. The Mameluks then made the kingdom a tributary state in 1426; the remaining monarchs gradually lost almost all independence, until 1489 when the last Queen, Catherine Cornaro, was forced to sell the island to Venice.[5]

Pretenders of the Kingdom of Cyprus