Modern scholarship, incorporating textual criticism and archaeology, has challenged the biblical account that the northern kingdom of Israel broke off from a united monarchy with the southern kingdom of Judah, suggesting instead that the northern civilization of Israel developed independently of Judah (a comparatively small and rural area), and that it first reached the political, economic, military and architectural sophistication of a kingdom under the Omride dynasty around 884 BC.[1]:169–195[2][3]

The Kingdom of Israel existed roughly from 930 until 720 BC, when it was conquered by the Neo-Assyrian Empire. The major cities of the kingdom were Shechem, Tirzah, and Shomron (Samaria).

In the Hebrew Bible, the Kingdom of Israel has been referred to as the "House of Joseph".[4][5] It is also frequently referenced (particularly in poetry) as Ephraim, the tribe whose territory housed the capital cities and the royal families. It has also been referred to as "Israel in Samaria".[6]

According to the Hebrew Bible, the territory of the Kingdom of Israel comprised the territories of the tribes of Zebulun, Issachar, Asher, Naphtali, Dan, Manasseh, Ephraim, Reuben and Gad. Its capital was Samaria according to the Book of Isaiah.

The United Kingdom of Israel and Judah is said to have existed from about 1030 to about 930 BC. It was a union of all the twelve Israelite tribes living in the area that presently approximates modern Israel and the Palestinian territories.

After the death of Solomon in about 931 BC, all the Israelite tribes except for Judah and Benjamin (called the ten northern tribes) refused to accept Rehoboam, the son and successor of Solomon, as their king.[7] The rebellion against Rehoboam arose after he refused to lighten the burden of taxation and services that his father had imposed on his subjects.[8]

Jeroboam, who was not of the Davidic line, was sent for from Egypt by the malcontents.[9] The Tribe of Ephraim and all Israel raised the old cry, "Every man to his tents, O Israel".[10] Rehoboam fled to Jerusalem,[11][12] and in 930 BC (some date it in 920), Jeroboam was proclaimed king over all Israel at Shechem. After the revolt at Shechem at first only the tribe of Judah remained loyal to the house of David. But very soon after the tribe of Benjamin joined Judah. The northern kingdom continued to be called the Kingdom of Israel or Israel, while the southern kingdom was called the kingdom of Judah. 2 Chronicles 15:9[13] also says that members of the tribes of Ephraim, Manasseh and Simeon fled to Judah during the reign of Asa of Judah.

Shechem was the first capital of the Kingdom of Israel.[14] Afterwards it was Tirzah.[15] King Omri built his capital in Samaria (1 Kings 16:24), which continued as such until the destruction of the Kingdom by the Assyrians (2 Kings 17:5). During the three-year siege of Samaria by the Assyrians, Shalmaneser V died and was succeeded by Sargon II of Assyria, who himself records the capture of that city thus: "Samaria I looked at, I captured; 27,280 men who dwelt in it I carried away" into Assyria. Thus, around 720 BC, after two centuries, the kingdom of the ten tribes came to an end.

Today, among archaeologists, Samaria is one of the most universally accepted archaeological sites from the biblical period[16] At around 850 BC, the Mesha Stele, written in Old Hebrew alphabet, records a victory of King Mesha of Moab against king Omri of Israel and his son Ahab.[17]

Relations between the kingdoms

For the first sixty years, the kings of Judah tried to re-establish their authority over the northern kingdom, and there was perpetual war between them. For the following eighty years, there was no open war between them, and, for the most part, they were in friendly alliance, co-operating against their common enemies, especially against Damascus.

The conflict between Israel and Judah was resolved when Jehoshaphat, King of Judah, allied himself with the house of Ahab through marriage. Later, Jehosophat's son and successor, Jehoram of Judah, married Ahab's daughter Athaliah, cementing the alliance. However, the sons of Ahab were slaughtered by Jehu following his coup d'état around 840 BC.

Destruction of the kingdom 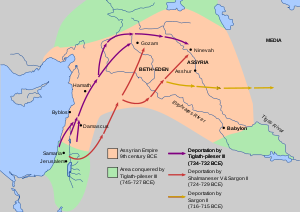 Deportation of the Northern Kingdom by the Assyrian Empire
Main article: Assyrian captivity

In c. 732 BC, Pekah of Israel, while allied with Rezin, king of Aram, threatened Jerusalem. Ahaz, king of Judah, appealed to Tiglath-Pileser III, the king of Assyria, for help. After Ahaz paid tribute to Tiglath-Pileser[18] Tiglath-Pileser sacked Damascus and Israel, annexing Aram[19] and territory of the tribes of Reuben, Gad and Manasseh in Gilead including the desert outposts of Jetur, Naphish and Nodab. People from these tribes including the Reubenite leader, were taken captive and resettled in the region of the Khabur River system. Tiglath-Pilesar also captured the territory of Naphtali and the city of Janoah in Ephraim and an Assyrian governor was placed over the region of Naphtali. According to 2 Kings 16:9 and 15:29, the population of Aram and the annexed part of Israel was deported to Assyria.

Israel continued to exist within the reduced territory as an independent kingdom until around 720 BC, when it was again invaded by Assyria and the rest of the population deported. The Bible relates that the population of Israel was exiled, becoming known as the Ten Lost Tribes, leaving only the Tribe of Judah, the Tribe of Simeon (that was "absorbed" into Judah), the Tribe of Benjamin and the people of the Tribe of Levi who lived among them of the original Israelites nation in the southern Kingdom of Judah. However, in their book The Bible Unearthed, authors Israel Finkelstein and Neil Asher Silberman estimate that only a fifth of the population (about 40,000) were actually resettled out of the area during the two deportation periods under Tiglath-Pileser III and Sargon II.[1]:221 Many also fled south to Jerusalem, which appears to have expanded in size fivefold during this period, requiring a new wall to be built, and a new source of water (Siloam) to be provided by King Hezekiah.

The remainder of the northern kingdom was conquered by Sargon II, who captured the capital city Samaria in the territory of Ephraim. He took 27,290 people captive from the city of Samaria resettling some with the Israelites in the Khabur region and the rest in the land of the Medes thus establishing Hebrew communities in Ecbatana and Rages.

The Book of Tobit additionally records that Sargon had taken other captives from the northern kingdom to the Assyrian capital of Nineveh, in particular Tobit from the town of Thisbe in Naphtali.

In medieval Rabbinic fable, the concept of the ten tribes who were taken away from the House of David (who continued the rule of the southern kingdom of Judah), becomes confounded with accounts of the Assyrian deportations leading to the myth of the "Ten Lost Tribes". The recorded history differs from this fable: No record exists of the Assyrians having exiled people from Dan, Asher, Issachar, Zebulun or western Manasseh. Descriptions of the deportation of people from Reuben, Gad, Manasseh in Gilead, Ephraim and Naphtali indicate that only a portion of these tribes were deported and the places to which they were deported are known locations given in the accounts. The deported communities are mentioned as still existing at the time of the composition of the books of Kings and Chronicles and did not disappear by assimilation. 2 Chronicles 30:1-11[20] explicitly mentions northern Israelites who had been spared by the Assyrians in particular people of Ephraim, Manasseh, Asher, Issachar and Zebulun and how members of the latter three returned to worship at the Temple in Jerusalem during the reign of Hezekiah. 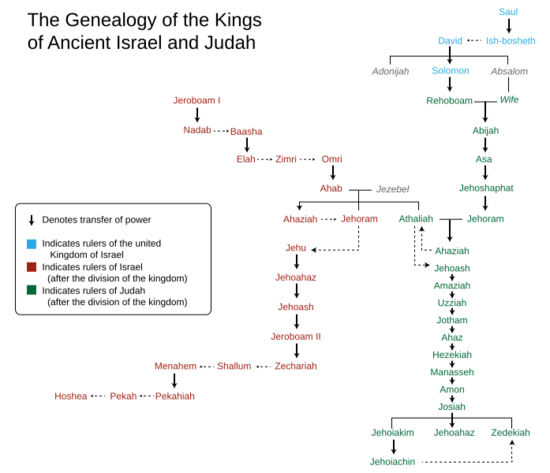 . Most historians follow either of the older chronologies established by William F. Albright or Edwin R. Thiele, or the newer chronologies of Gershon Galil and Kenneth Kitchen, all of which are shown below. All dates are BC.

The Kingdom of Judah continued to exist as an independent state until 586 BC, when it was conquered by the Neo-Babylonian Empire.

The religious climate of the Kingdom of Israel appears to have followed two major trends. The first, that of worship of Yahweh, and the second that of worship of Baal as detailed in the Hebrew Bible (1 Kings 16:31) and in the Baal cycle discovered at Ugarit.

According to the Hebrew Bible Jeroboam built two places of worship, one at Bethel and one at far northern Dan, as alternatives to the Temple in Jerusalem.[23](1 Kings 12:29) He did not want the people of his kingdom to have religious ties to Jerusalem, the capital city of the rival Kingdom of Judah. He erected golden bulls at the entrance to the Temples to represent the national god.[24] The Hebrew Bible, written from the perspective of scribes in Jerusalem, referred to these acts as the way of Jeroboam or the errors of Jeroboam.[24] (1 Kings 12:26-29)

The Bible states that Ahab allowed the cult worship of Baal to become an acceptable religion of the kingdom. His wife Jezebel was a devotee to Baal worship. (1 Kings 16:31)

List of proposed Assyrian references to Kingdom of Israel (Samaria)

The table below lists all the historical references to the Kingdom of Israel (Samaria) in Assyrian records.[25]