The Kingdom of Tlemcen was a Moorish kingdom in what is now the northwest of Algeria. Its territory stretched from Tlemcen to the Chelif bend and Algiers, and reached at its zenith the Moulouya river to the west, Sijilmasa to the south and the Soummam river to the east.[3][4]

The kingdom was established after the demise of the Almohad Caliphate in 1236, and later fell under Ottoman rule in 1554. It was ruled by sultans of the Zayyanid dynasty. The capital of the kingdom was at Tlemcen, which lay on the main east-west route between Morocco and Ifriqiya.

Tlemcen was also a hub on the north-south trade route from Oran on the Mediterranean coast to the Western Sudan. As a prosperous trading center, it attracted its more powerful neighbors. At different times the Moroccans from the west, Ifriqiyans from the east, and Aragonese from the north invaded and occupied the kingdom.

The Bānu ʿabd āl-Wād, also called the Bānu Ziyān or Zayyanids after Yaghmurasen Ibn Zyan, the founder of the dynasty, were leaders of a Berber group who had long been settled in the Central Maghreb. Although contemporary chroniclers asserted that they had a noble origin, little is known for sure.[5] The town of Tlemcen, called Pomaria by the Romans, is about 2,500 feet (760 m) above sea level in fertile, well-watered country.[6] Tlemcen was an important center under the Almoravids and their successors the Almohads, who began a new wall around the town in 1161.[7]

Yaghmurasen ibn Zayyan (1235-83) of the Bānu ʿabd āl-Wād was governor of Tlemcen under the Almohads.[8] He inherited leadership of the family from his brother in 1235.[9] When the Almohad empire began to fall apart, in 1235 Yaghmurasen declared his independence.[8] The city of Tlemcen became the capital of one of three successor states, ruled for centuries by successive Ziyyanid sultans.[10] Its flag was a white crescent pointing upwards on a blue field.[11] The kingdom covered the less fertile regions of the Tell Atlas. Its people included a minority of settled farmers and villagers, and a majority of nomadic herders.[8]

Yaghmurasen was able to maintain control over the rival Berber groups, and when faced with the outside threat of the Marinids, he formed an alliance with the Sultan of Granada and the King of Castile, Alfonso X.[12] According to Ibn Khaldun, "he was the bravest, most dreaded and honorable man of the 'Abd-la-Wadid family. No one looked after the interest of his people, maintained the influence of the kingdom and managed the state administration better than he did."[9] Before his death he instructed his son and heir Uthman to remain on the defensive with the Marinid kingdom, but to expand into Hafsid territory if possible.[9] Under Yaghmurasen's leadership, and later under Abu Hammu II (1359-89), the kingdom pursued an expansionary policy, pushing towards Fez in the west and into the Chelif valley and Béjaïa in the east.[8] 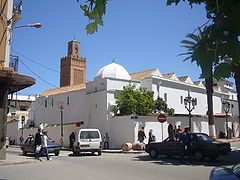 Great Mosque of Tlemcen. Built under Almoravid sultan Yusuf ibn Tashfin, Sultan Yaghmurasen Ibn Zyan (1236-1283), founder of the Zayyanid dynasty added a section with a minaret and a dome in the 13th century.

The city of Tlemcen displaced Tahert (Tiaret) as the main trading hub in the central Maghrib, lying on the west-east route between Fez and Ifrikiya. Another major route from Oran ran south through Tlemcen to the oases of the Sahara, and onward to the Western Sudan region to the south. The city was directly linked to Sijilmasa, the main northern hub for the trade routes that crossed the desert to the Western Sudanese markets.[13] Oran, a port that the Andalusians had founded in the tenth century to handle the trade with Tahert, came to serve Tlemcen in its trade with Europe. Fez was nearer to Sijilmasa than Tlemcen, but the route to Fez led over the Atlas mountains, while the route to Tlemcen was easier for the caravans.[14] Yaghmurasan made an attempt to capture Sijilmasa in 1257, and succeeded in 1264, holding the town for almost ten years. The Marinids then took Sijilmasa, but most of the trade continued to flow through Tlemcen.[13]

The city of Tlemcen became an important center, with many schools, mosques and palaces.[5] Tlemcen also housed a European trading center (funduk) which connected African and European merchants.[15] In particular, Tlemcen was one of the points through which African gold (arriving from south of the Sahara via Sijilmasa or Taghaza) entered the European hands.[15] Consequently, Tlemcen was partially integrated into the European financial system. So, for example, Genoese bills of exchange circulated there, at least among merchants not subject to (or not deterred by) religious prohibitions.[16]

Tlemcen housed several well-known madrasas and numerous wealthy religious foundations, becoming the principal intellectual center of the central Maghreb. At the souq around the Great Mosque, merchants sold woolen fabrics and rugs from the East, slaves and gold from across the Sahara, local earthenware and leather goods, and a variety of Mediterranean maritime goods "redirected" to Tlemcen by corsairs -- in addition to the intentional European imports available at the funduk.[17] Merchant houses based in Tlemcen, such as the al-Makkari maintained regular branch offices in Mali and the Sudan.[18][19]

The ruler of Tlemcen is reported to have been advised by a Jewish viceroy named Abraham, who, in the time of the Inquisition of Torquemada, opened the gates of Tlemcen to Jewish and Muslim refugees fleeing Spain. Abraham is said to have supported them with his own money and with the tolerance of the king of Tlemcen.[citation needed] 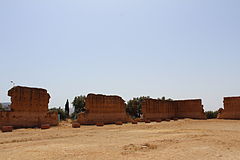 Columns from the Mansura mosque

For most of its history the kingdom was on the defensive, threatened by stronger states to the east and the west. The nomadic Arabs to the south also took advantage of the frequent periods of weakness to raid the center and take control of pastures in the south.

The city of Tlemcen was several times attacked or besieged by the Marinids of Morocco, and large parts of the kingdom were occupied by the Moroccans for several decades in the fourteenth century.[8]

The Marinid Abu Yaqub Yusuf an-Nasr besieged Tlemcen from 1299 to 1307. During the siege he built a new town, al-Mansura, diverting most of the trade to this town.[13] The new city was fortified and had a mosque, baths and palaces. The siege was raised when Abu Yakub was murdered in his sleep by one of his eunuchs.[20]

Abu Yakub was succeeded by his sons Abu Thabit and Abu Rabi between 1307 and 1310, and then by his brother Abu Sa'id Uthman II, who came to the throne in 1310. Abu Sa'id was distracted by revolts of his son Abu Ali, the governor of Sijilmasa. Abu Sa'id died in 1331. His son Abu al-Hasan 'Ali (r. 1331–1351), the greatest Marinid Sultan, ended the internal quarrels and initiated an expansionary program.[21]

When the Marinids left in 1307, the Zayyanids promptly destroyed al-Mansura.[13] Tlemcen recovered its trade and its population grew, reaching about 40,000 by around the 1330s.[13] The Zayyanid king Abu Zayyan I died in 1308 and was succeeded by Abu Hammu I (r. 1308-1318). Abu Hammu was killed in a conspiracy instigated by his son and heir Ibn Tashufin (r. 1318-1337), who initiated hostilities against Ifriqiya while the Marinids were distracted by their internal struggles. Ibn Tashufin besieged Béjaïa, and sent an army into Tunisia that defeated the Hafsid king Abu Yahya Abu Bakr II, who fled to Constantine while the Zayyanids occupied Tunis.[20]

A Hafsid princess had married Sultan Abu'l Hasan of Fez, and the Hafsids appealed to him for help, providing a welcome excuse for invading his neighbor.[21] Abu'l Hasan initiated a siege of Tlemcen in 1335, and the city fell in 1337.[13] Ibn Tashufin died during the fighting.[20] Abu'l Hasan received delegates from Egypt, Granada, Tunis and Mali congratulating him on his victory, by which he had gained complete control of the trans-Saharan trade.[21] In 1346 the Hafsid Sultan, Abu Bakr, died and a dispute over the succession ensued. In 1347 Abu'l Hasan annexed Ifriqiya, briefly reuniting the Maghrib territories as they had been under the Almohads.[22]

However, Abu'l Hasan went too far in attempting to impose more authority over the Arab tribes, who revolted and in April 1348 defeated his army near Kairouan. His son, Abu Inan Faris, who had been serving as governor of Tlemcen, returned to Fez and declared that he was sultan. Tlemcen and the central Maghreb revolted.[22] The Zayyanid Abu Sa'id Uthman II (1348-1352) was proclaimed king of Tlemcen.[20] Abu'l Hasan had to return from Ifriqiya by sea. After failing to retake Tlemcen and being defeated by his son, Abu'l Hasan died in May 1351.[22] In 1352 Abu Inan Faris recaptured Tlemcen. He also reconquered the central Maghreb. He took Béjaïa in 1353 and Tunis in 1357, becoming master of Ifrikiya. In 1358 he was forced to return to Fez due to Arab opposition, where he feel sick and was killed.[22]

The Zayyanid king Abu Hammu Musa II (r. 1359-1389) next took the throne of Tlemcen. He had a long reign punctuated by fighting against the Marinids or various rebel groups.[20] The Marinids reoccupied Tlemcen in 1360 and in 1370.[23] In both cases, the Marinids found they were unable to hold the region against local resistance.[24] The historian Ibn Khaldun lived in Tlemcen for a period during the generally prosperous reign of Abu Hammu Musa II, and helped him in negotiations with the nomadic Arabs. He said of this period, "Here [in Tlemcen] science and arts developed with success; here were born scholars and outstanding men, whose glory penetrated into other countries." Abu Hammu was deposed by his son, Abu Tashfin II (1389-94), and the state went into decline.[25] 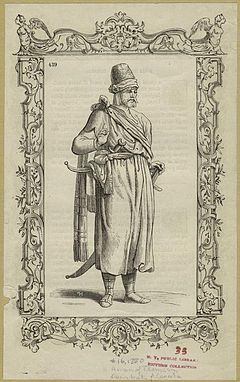 A man of Tlemcen

In the 15th century, expansion eastward was attempted, but proved disastrous. The state was increasingly weak and became intermittently a vassal of Hafsid Ifriqiya, Marinid Morocco or the Crown of Aragon.[26] By the end of the fifteenth century the Kingdom of Aragon had gained effective political control, intervening in the dynastic disputes of the amirs of Tlemcen, whose authority had shrunk to the town and its immediate neighborhood.[25] When the Spanish took the city of Oran from the kingdom in 1509, continuous pressure from the Berbers prompted the Spanish to attempt a counterattack against the city of Tlemcen (1543), which was deemed by the Papacy to be a crusade. The Spanish failed to take the city in the first attack, but the strategic vulnerability of Tlemcen caused the kingdom's weight to shift toward the safer and more heavily fortified corsair base at Algiers.

Tlemcen was captured in 1554 by the Turks under Salih Reis, the Pasha of Algiers.[7] The last sultan's son escaped to Oran, then a Spanish possession. He was baptized and lived a quiet life as Don Carlos at the court of Philip II of Spain. Under the Ottoman Empire the town quickly lost its former importance, becoming a sleepy provincial town.[27] The failure of the kingdom to become a powerful state can be explained by the lack of geographical or cultural unity, the constant internal disputes and the reliance on Arab nomads for the military.[12]