From Infogalactic: the planetary knowledge core
(Redirected from Kingdom of Tondo)
Jump to: navigation, search

Tondo (Filipino: Lupain ng Tondo) also referred to as Tundo, Tundun, Tundok, Lusung) was a fortified polity[1] which was located in the Manila Bay area, specifically north of the Pasig River, on Luzon island. It is one of the settlements mentioned by the Philippines' earliest historical record, the Laguna Copperplate Inscription.

Originally an Indianized kingdom in the 10th century, Tondo built upon and capitalized on being central to the long-existing ancient regional trading routes throughout the archipelago to include among others, initiating diplomatic and commercial ties with China during the Ming Dynasty. Thus it became an established force in trade throughout Southeast Asia and East Asia. (See Luções). Tondo's regional prominence further culminated during the period of its associated trade and alliance with Brunei's Sultan Bolkiah, when around 1500 its peak age as a thalassocratic force in the northern archipelago was realized. When the Spanish first arrived in Tondo in 1570 and defeated the local rulers in the Manila Bay area in 1591, Tondo came under the administration of Manila (a Spanish fort built on the remains of Kota Seludong), ending its existence as an independent polity. This subjugated Tondo continues to exist today as a district of the city of Manila.

Numerous theories on the origin of the name "Tondo" have been put forward. Philippine National Artist Nick Joaquin suggested that it might be a reference to high ground ("tundok").[2] French linguist Jean-Paul Potet, however, has suggested that the River Mangrove, Aegiceras corniculatum, which at the time was called "tundok" ("tinduk-tindukan" today), is the most likely origin of the name.[3]

The first reference to Tondo occurs in the Philippines' oldest historical record — the Laguna Copperplate Inscription (LCI). This legal document was written in Kawi, and dates back to Saka 822 (c. 900).

The first part of the document says that:

On this occasion, Lady Angkatan, and her brother whose name is Bukah, the children of the Honourable Namwaran, were awarded a document of complete pardon from the King of Tundun, represented by the Lord Minister of Pailah, Jayadewa.

Apparently, the document was a sort of receipt that acknowledged that the man named Namwaran had been cleared of his debt to the King of Tundun, which in today's measure would be about 926.4 grams of gold.[4]

The article mentioned that other places in the Philippines and their Rulers: Pailah (Lord Minister Jayadewa), Puliran Kasumuran (Lord Minister), Binwangan (unnamed). It has been suggested that Pailah, Puliran Kasumuran, and Binwangan are the towns of Paila, Pulilan, and Binwangan in Bulacan,[4] but it has also been suggested that Pailah refers to the town of Pila, Laguna. More recent linguistic research of the Old Malay grammar of the document suggests the term Puliran Kasumuran refers to the large lake now known as Laguna de Ba'y (Puliran), citing the root of kasumuran, *sumur as Old Malay for well, spring or freshwater source. Hence ka-sumur-an defines a water-source (in this case the freshwater lake of Puliran itself).[5] While the document does not describe the exact relationship of the King of Tundun with these other rulers, it at least suggests that he was of higher rank.[6]

Relations with the Medang Kingdom (900)

The Dutch anthropologist and Hanunó'o script expert Antoon Postma has concluded that the document also mentions the places of Tondo (Tundun); Paila (Pailah), now an enclave of Barangay San Lorenzo, Norzagaray; Binuangan (Binwangan), now part of Obando; and Pulilan (Puliran); and Mdaŋ (the Javanese Kingdom of Medang), in present-day Indonesia.[7] Apparently, the Philippine Kingdom of Tondo and the Medang Kingdom of Indonesia were known allies and trading partners.

Diplomacy with the Ming dynasty (1373)

The next historical reference to Ancient Tondo can be found in the Ming Shilu Annals (明实录]),[8] which record the arrival of an envoy from Luzon to the Ming Dynasty (大明朝) in 1373.[8] Her rulers, based in their capital, Tondo (Chinese: 東都; pinyin: dōngdū) were acknowledged not as mere chieftains, but as kings (王).[9] This reference places Tondo into the larger context of Chinese trade with the aboriginals of the Philippine archipelago.

Theories such as Wilhelm Solheim's Nusantao Maritime Trading and Communication Network (NMTCN) suggest that cultural links between what are now China and the nations of Southeast Asia, including what is now the Philippines, date back to the peopling of these lands.[10] But the earliest archeological evidence of trade between the Philippine aborigines and China takes the form of pottery and porcelain pieces dated to the Tang and Song Dynasties.[11]

The rise of the Ming dynasty saw the arrival of the first Chinese settlers in the archipelago. They were well received and lived together in harmony with the existing local population — eventually intermarrying with them such that today, numerous Filipinos have Chinese blood in their veins.[11]

This connection was important enough that when the Ming Dynasty emperors enforced the Hai jin laws which closed China to maritime trade from 1371 to about 1567, trade with the Kingdom of Tondo was officially allowed to continue, masqueraded as a tribute system, through the seaport at Fuzhou.[12] Aside from this, a more extensive clandestine trade from Guangzhou and Quanzhou also brought in Chinese goods to Luzon.[13]

Luzon and Tondo thus became a center from which Chinese goods were traded all across Southeast Asia. Chinese trade was so strict that Luzon traders carrying these goods were considered "Chinese" by the people they encountered.[13]

This powerful presence in the trade of Chinese goods in 16th-century East Asia was also felt strongly by Japan.[14] The Ming Empire treated Luzon traders more favorably than Japan by allowing them to trade with China once every two years, while Japan was only allowed to trade once every 10 years. Japanese merchants often had to resort to piracy in order to obtain much sought after Chinese products such as silk and porcelain. Famous 16th-century Japanese merchants and tea connoisseurs like Shimai Soushitsu (島井宗室) and Kamiya Soutan (神屋宗湛) established branch offices on the island of Luzon. One famous Japanese merchant, Luzon Sukezaemon (呂宋助左衛門), went as far as to change his surname from Naya (納屋) to Luzon (呂宋).

Incorporation into the Sultanate of Brunei (1500)

File:Pre 1521 Philippines map.jpg
Before the Western contact, the Philippine archipelago had its own rulers and kingdoms, which is Sinified , Indianized and Muslim States.

Tondo became so prosperous that around the year 1500, the Sultanate of Brunei under Sultan Bolkiah merged it by a royal marriage of Gat Lontok, who later became Rajah of Namayan, and Dayang Kaylangitan to establish a city with the Malay name of Selurong (later to become the city of Maynila)[15][16] on the opposite bank of Pasig River. The traditional rulers of Tondo, the Lakandula, retained their titles and property upon embracing Islam but the real political power transferred to the master trader House of Sulayman, the Rajahs of Manila.[17]

Spanish colonizers first came to the Manila Bay area and its settlements in June 1570, while Miguel López de Legazpi was searching for a suitable place to establish a capital for the new territory. Having heard from the natives of a prosperous Moro settlement on the island of Luzon, López de Legazpi had sent Martín de Goiti to investigate. When Maynila's ruler, Rajah Sulaiman II, refused to submit to Spanish sovereignty, de Goiti attacked. He eventually defeated Rajah Sulaiman, claimed Maynila in the name of the King of Spain, then returned to report his success to López de Legazpi, who was then based on the island of Panay.

López de Legazpi himself returned to take the settlement on 19 June 1571. When the Spanish forces approached, the natives burned Maynila down and fled to Tondo and other neighboring towns.

López de Legazpi began constructing a fort on the ashes of Maynila and made overtures of friendship to Lakandula of Tondo, who accepted. The defeated Sulaiman refused to submit to the Spaniards, but failed to get the support of Lakandula or of the Kapampangan and Pangasinan settlements to the north. When Sulaiman and a force of muslim warriors attacked the Spaniards in the battle of Bangcusay, he was finally defeated and killed.

This defeat marked the end of rebellion against the Spanish among the Pasig river settlements, and Lakandula's Tondo surrendered its sovereignty, submitting to the authority of the new Spanish capital, Manila.[18]

Lakan as a title 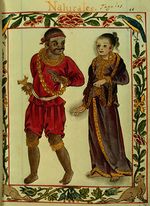 A portrayal of the Ginu class. From the Boxer Codex, c. 1595

While most historians think of Lakan Dula as a specific person, with Lakan meaning Lord, King or Paramount Ruler and Dula being a proper name, one theory suggests that Lakandula is a hereditary title for the Monarchs of the Kingdom of Tondo.[19]

The heirs of Lakan Banao Dula

In 1587, Magat Salamat, one of the children of Lakan Dula, and with his Spanish enforced name Augustin de Legazpi, Lakan Dula's nephew, and the lords of the neighboring areas of Tondo, Pandakan, Marikina, Kandaba, Nabotas and Bulakan were martryed for secretly conspiring to overthrow the Spanish colonizers. Stories were told that Magat Salamat's descendants settled in Hagonoy, Bulacan and many of his descendants spread from this area.[20]

David Dula y Goiti, a grandson of Lakan Dula with a Spanish mother escaped the persecution of the descendants of Lakan Dula by settling in Isla de Batag, Northern Samar and settled in the place now called Candawid (Kan David). Due to hatred for the Spaniards, he dropped the Goiti in his surname and adopted a new name David Dulay. He was eventually caught by the Guardia Civil based in Palapag and was executed together with seven followers. They were charged with planning to attack the Spanish detachment.[20]

There was nearby state, Ma-i or Mayi, whose ruler used 30 people as human sacrifices in his funeral, the subordinates of Mayi were Baipuyan (Babuyan Islands), Bajinong (Busuanga), Liyin(Lingayen) and Lihan (present day Malolos City).Malolos is a coastal town and one of the ancient settlement around Manila Bay near Tondo.[21][22]