Kings Cross is an inner-city locality of Sydney, New South Wales, Australia. It is located approximately 2 kilometres east of the Sydney central business district, in the local government area of the City of Sydney. It is bounded by the suburbs of Potts Point, Elizabeth Bay, Rushcutters Bay and Darlinghurst.[2]

Colloquially known as The Cross, the area is known as Sydney's red-light district, and is reputed to be home to organised crime groups. Once known for its music halls and grand theatres, it was rapidly transformed after World War II by the influx of troops returning and visiting from the nearby Garden Island naval base. Today, it is a mixed locality offering both services (railway, gyms, supermarket, bakeries) to nearby residents and entertainment venues including bars, restaurants, nightclubs, brothels and strip clubs to visitors. 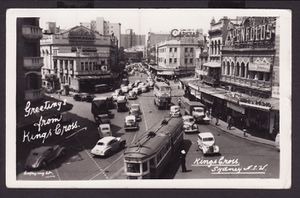 The intersection of William Street, Darlinghurst Road and Victoria Street at the locality's southernmost limit was named Queen's Cross to celebrate Queen Victoria's diamond jubilee in 1897. Confusion with Queen's Square in King Street in the city prompted its renaming as Kings Cross, after King Edward VII, in 1905.

During the early 19th century the Darlinghurst area, which extended to include current day Kings Cross, was one of Sydney's most prestigious locations. Being far enough to escape the noise and smell of the central city but close enough for easy travel. An additional attraction was the commanding harbour views to the east and north and (from some points) views to the west as far as the Blue Mountains.

In 1828, the Governor of NSW Sir Ralph Darling subdivided the area, then known as Woolloomooloo Hill, into large allotments which he granted seventeen estates to favoured subordinates and leading businessmen. They built a series of grandiose mansions with sprawling gardens of up to ten acres (4 ha). The remnants of these gardens helped give the area its leafy character, and many of the mansions are commemorated through street names such as Roslyn, Orwell and Kellett. Most of the grand estates were ultimately subdivided with all but a handful of the great houses demolished. One of the surviving homes, located nearby in the suburb of Elizabeth Bay, is Elizabeth Bay House, a quintessential example of Australian colonial architecture. Others, now used for other purposes, include Tusculum in Manning Street and Rockwall.[3] A prominent past resident of this era was David Scott Mitchell.[3]

The Kings Cross district was Sydney's bohemian heartland from the early decades of the 20th century. The illegal trading of alcohol, known as sly grog, was notorious in the area up until mid-century, led by rival brothel owners, Tilly Devine and Kate Leigh.[3] The area was home to a large number of artists, including writers, poets and journalists including Kenneth Slessor, Christopher Brennan, Hal Porter, George Sprod and Dame Mary Gilmore, entrepreneur Mayfield B. Anthony, actors including Peter Finch and Chips Rafferty, and painter Sir William Dobell.[3] 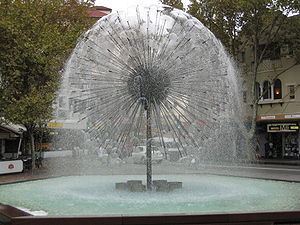 From the 1960s onwards Kings Cross also came to serve as both the city's main tourist accommodation and entertainment mecca, as well as its red-light district. It thereby achieved a high level of notoriety out of all proportion to its limited geographical extent. Hundreds of American servicemen on R & R (rest and recreation) leave flocked to the area each week in search of entertainment. Organised crime and police corruption was well entrenched in the area – one of Sydney's most notorious illegal casinos operated with impunity for many years, although it was known to all and located only yards from Darlinghurst police station. Much of this activity can be related with Abe Saffron, commonly known as Mr Sin or "the boss of the Cross".

A positive influence in the area during that time was The Wayside Chapel, run by the late Rev Ted Noffs. His church was open most of the time, providing a "drop in centre" and counselling services to many of the itinerants who were drawn to the area. The Ted Noff Foundation, established in 1971,[4] continues his work supporting young people and their families who are experiencing drug and alcohol problems and related trauma.

Juanita Nielsen, a journalist and publisher, campaigned against property development in the Kings Cross area during the 1970s until her sudden disappearance on 4 July 1975. A coronial inquest determined that Nielsen had been murdered, and although the case has never been officially solved, it is widely believed that Nielsen was killed by agents of the developers.[3][5]

As a celebration to commemorate the Stonewall Riots, the inaugural Sydney Gay and Lesbian Mardi Gras pro-gay rights protest march was held on the evening of 24 June 1978. After the protest march, participants were subject to police harassment in Hyde Park, following the revocation of the original protest permit. Some participants headed to Kings Cross where police arrested 53 people, although most of the charges were later dropped.[3] Australia's first widely known transgender person, Carlotta, rose to prominence in Kings Cross whilst working at Les Girls (nightclub), The Tender Trap, and soap opera Number 96 (TV series).[3]

From the late 1960s, drug-related crime was one of the area's main social problems. In 2001, despite controversy, Australia's first Medically Supervised Injecting Centre was established (where users of illegal drugs can inject themselves at a safe injection site in clean conditions) at a shopfront site in Kings Cross. The injecting room is credited with reducing the occurrence of fatal overdoses in the injecting drug user community, as well as reducing the number of needles left in the street with an interim evaluation report in 2007 claiming[6]

The reduction in opioid-related overdoses was much more substantial in the immediate vicinity of the MSIC than in other neighbouring areas. ... Counts of discarded needles and syringes collected locally indicated a decrease of around 50% following the establishment of the service.

Today with the ongoing operation of tourist accommodation, the proximity to social housing & health care, and the convenient public transport to the city results in a diverse population both resident and passing through at Kings Cross. 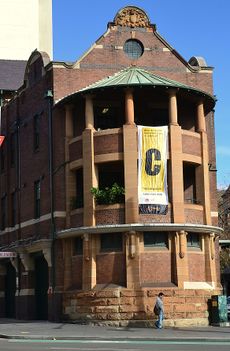