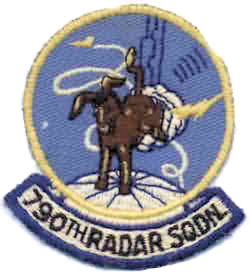 Emblem of the 790th Radar Squadron

Kirksville Air Force Station was one of twenty-eight stations built as part of the second segment of the Air Defense Command permanent radar network. Prompted by the start of the Korean War, on July 11, 1950, the Secretary of the Air Force asked the Secretary of Defense for approval to expedite construction of the permanent network. Receiving the Defense Secretary’s approval on July 21, the Air Force directed the Corps of Engineers to proceed with construction.

Activated at Sublette, MO on 1 May 1951 the 790th Aircraft Control and Warning Squadron began operations with a pair of AN/FPS-10 radars at this site in April, and initially the station functioned as a Ground-Control Intercept (GCI) and warning station. As a GCI station, the squadron's role was to guide interceptor aircraft toward unidentified intruders picked up on the unit's radar scopes.

The station was renamed Kirksville Air Force Station (AFS) on 1 December 1953. One AN/FPS-10 height-finder radar was phased out in 1958 with the arrival of two AN/FPS-6A sets. The other AN/FPS-10 stayed in operation until 1963 and then was replaced with an AN/FPS-7.

During 1959 Kirksville AFS joined the Semi Automatic Ground Environment (SAGE) system, initially feeding data to DC-07 at Truax Field, Wisconsin. After joining, the squadron was redesignated as the 790th Radar Squadron (SAGE) on 1 November 1959. The radar squadron provided information 24/7 the SAGE Direction Center where it was analyzed to determine range, direction altitude speed and whether or not aircraft were friendly or hostile. On 31 July 1963, the site was redesignated as NORAD ID Z-64.

In addition to the main facility, Kirksville operated an AN/FPS-18 Gap Filler site:

Kirksville began SAGE operations in 1959. The Air Force inactivated the 790th on 8 September 1968, closing the station on 30 September. After the Air Force inactivated, it was taken over by the Federal Aviation Administration as a Long Range Radar site and was equipped with ARSR-1 Radar. Now with an ARSR-3 radar, the site is now data-tied into the Joint Surveillance System (JSS).