From Infogalactic: the planetary knowledge core
(Redirected from Kitchen middens)
Jump to: navigation, search
This article is about archaeological remains, known in Spanish and Portuguese as "conchales". For the municipality in São Paulo, Brazil, see Conchal. For the study of modern refuse and trash, see Garbology. 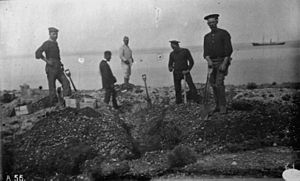 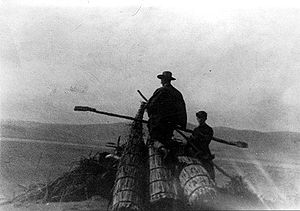 Martin Gusinde in the indigenous Chilean midden of Pichilemu, in 1917.

A midden (also kitchen midden or shell heap; from early Scandinavian; Danish: mødding, Swedish regional: mödding)[1] is an old dump for domestic waste[2] which may consist of animal bone, human excrement, botanical material, vermin, shells, sherds, lithics (especially debitage), and other artifacts and ecofacts associated with past human occupation. The word is of Scandinavian via Middle English derivation, but is used by archaeologists worldwide to describe any kind of feature containing waste products relating to day-to-day human life. They may be convenient, single-use pits created by nomadic groups or long-term, designated dumps used by sedentary communities that accumulate over several generations.

These features, therefore, provide a useful resource for archaeologists who wish to study the diet and habits of past societies. Middens with damp, anaerobic conditions can even preserve organic remains in deposits as the debris of daily life are tossed on the pile. Each individual toss will contribute a different mix of materials depending upon the activity associated with that particular toss. During the course of deposition sedimentary material is deposited as well. Different mechanisms, from wind and water to animal digs, create a matrix which can also be analyzed to provide seasonal and climatic information. In some middens individual dumps of material can be discerned and analysed.[3] 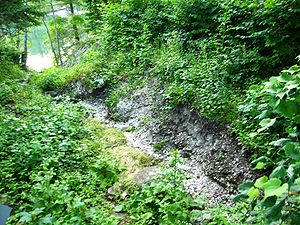 The Whaleback Shell Midden in Maine resulted from oyster harvesting from 200 BC to AD 1000.

A shell midden or shell mound is an archaeological feature consisting mainly of mollusk shells. The Danish term køkkenmøddinger (plural) was first used by Japetus Steenstrup to describe shell heaps and continues to be used by some researchers. A midden, by definition, contains the debris of human activity, and should not be confused with wind or tide created beach mounds. Some shell middens are processing remains: areas where aquatic resources were processed directly after harvest and prior to use or storage in a distant location. Some shell middens are directly associated with villages, as a designated village dump site. In other middens, the material is directly associated with a house in the village; each household would dump its garbage directly outside the house. In all cases, shell middens are extremely complex and very difficult to excavate fully and exactly. However, the fact that they contain a detailed record of what food was eaten or processed and many fragments of stone tools and household goods makes them invaluable objects of archaeological study.

Edward Sylvester Morse conducted one of the first achaeological excavations of shellmounds in Omori, Japan in 1877, which led to the discovery of a style of pottery described as "cord-marked", translated as "Jōmon", which came to be used to refer to the early period of Japanese history when this style of pottery was produced.[5][6] Shell middens were studied in Denmark in the latter half of the 19th century. The Danish word køkkenmødding (kitchen mound) is now used internationally. The English word "midden" (waste mound) derives from the same Old Norse word that produced the modern Danish one.[7]

Shell middens are found in coastal zones all over the world. Consisting mostly of mollusc shells, they are interpreted as being the waste products of meals eaten by nomadic groups or hunting parties. Some are small examples relating to meals had by a handful of individuals, others are many metres in length and width and represent centuries of shell deposition. In Brazil, they are known as sambaquis, having been created over a long period between the 6th millennium BC and the beginning of European colonisation.

On Canada's west coast, there are shell middens that run for more than a kilometer along the coast and are several meters deep.[8] The midden in Namu, British Columbia is over 9 meters deep and spans over 10,000 years of continuous occupation.

Shell middens created in coastal regions of Australia by indigenous Australians hold particular significance in Australia today. Aboriginal Australians were generally hunter-gatherer nomadic peoples who left no permanent structures. Middens provide evidence of prior occupation and are generally protected from mining and other developments. Again, one must exercise caution in deciding whether one is examining a midden or a beach mound. There are good examples on the Freycinet Peninsula in Tasmania where wave action currently is combining charcoal from forest fire debris with a mix of shells into masses that storms deposit above high-water mark. Shell mounds near Weipa in far north Queensland that are up to 13 meters high and several hundred meters long are considered to be middens,[9] but may also be explained by natural causes.[10]

There are instances in which shell middens may have doubled as areas of ceremonial construction or ritual significance. The Woodland period Crystal River site provides an example of this phenomenon.[12]

The word "midden" is still in everyday use in Scotland and Northern England, and has come by extension to refer to anything that is a mess, including people. This use was also taken to Northern Ireland by Scottish plantation settlers. In West Yorkshire, a midden is an outdoor toilet, typically in the back yards of terraced houses. Often attached to this small building is an outhouse which houses dustbins.

The word is used by farmers in Britain to describe the place where farm yard manure from cows or other animals is collected. Grants are sometimes available to protect these from rain to avoid runoff and pollution.[13][14]

In the animal kingdom, some species establish ground burrows, also known as middens, that are used mostly for food storage. For example, the North American red squirrel (Tamiasciurus hudsonicus) usually has one large active midden in each territory with perhaps an inactive or auxiliary midden.[15] A midden may be a regularly used animal toilet area or dunghill, created by many mammals, such as the hyrax, and also serving as a territorial marker.[16]

Some birds and animals, including some species of fishes, collect foodstuffs with heavy shells that are hard to remove. They may establish sites where rocks or similar items are available as natural anvils on which the animals habitually break open the shells. These discarded shells may accumulate around the anvils in sizable middens, sometimes for generations. Commonly such middens are sited where there is a convenient rock that is an unusual resource in the region.

Some more currently widespread used terms include garbage pile, garbage dump, waste pile, waste dump, and waste/garbage disposal site. The material (waste, garbage, refuse, rubbish, etc.) may be placed on a pile/mound on level ground or in a hole/pit dug into the ground which may be subsequently covered over with other material, often for sanitary, aesthetic or land reclamation reasons.