From Infogalactic: the planetary knowledge core
(Redirected from Kithara)
Jump to: navigation, search 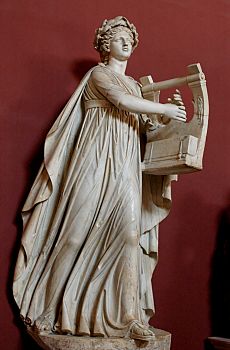 The cithara or kithara (Greek: κιθάρα, kithāra, Latin: cithara) was an ancient Greek musical instrument in the lyre or lyra family. In modern Greek the word kithara has come to mean "guitar" (a word whose origins are found in kithara). 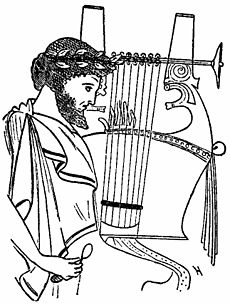 The kithara had a deep, wooden sounding box composed of two resonating tables, either flat or slightly arched, connected by ribs or sides of equal width. At the top, its strings were knotted around the crossbar or yoke (zugon) or to rings threaded over the bar, or wound around pegs. The other end of the strings was secured to a tail-piece after passing over a flat bridge, or the tail-piece and bridge were combined. Most vase paintings show kitharas with seven strings, in agreement with ancient authors, but these also mention that occasionally a skillful kitharode would use more than the conventional seven strings.

It was played with a rigid plectrum (or more modernly called pick) held in the right hand, with elbow outstretched and palm bent inwards, while the strings with undesired notes were damped with the straightened fingers of the left hand. 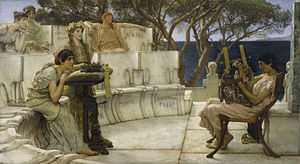 Alcaeus of Mytilene playing a kithara while Sappho listens by Lawrence Alma-Tadema (1881). The Walters Art Museum.

The kithara was played primarily to accompany dances and epic recitations, rhapsodies, odes, and lyric songs.[2] It was also played solo at the receptions, banquets, national games, and trials of skill. The music from this instrument was said to be the lyre for drinking parties and is considered an invention of Terpander. Aristotle said that these string instruments were not for educational purposes but for pleasure only.

The kithara was the virtuoso's instrument, generally known as taking a great deal of skill.[3]

Sappho is closely associated with music, especially string instruments like the kithara and the barbitos. She was a woman of high social standing and composed songs that focused on the emotions. A Greek mythology story goes that she ascended the steep slopes of Mount Parnassus where she was welcomed by the Muses. She wandered through the laurel grove and came upon the cave of Apollo, where she bathed in the Castalian Spring and took Phoebus' plectrum to play skillful music. The sacred nymphs danced while she stroked the strings with much talent to bring forth sweet musical melodies from the resonant kithara.[4]