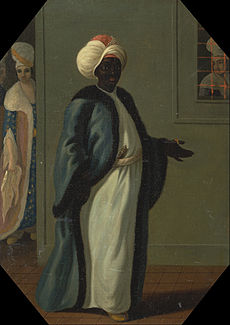 Image of an 18th-century Kizlar Agha

The Kizlar Agha (Ottoman Turkish: قيزلر اغاسی‎, Turkish: Kızlar Ağası, "Agha of the [slave] Girls"), formally the Agha of the House of Felicity (Arabic: Aghat Dar al-Sa'ada, Turkish: Darüssaade ağa),[1][2] was the head of the eunuchs who guarded the Imperial Harem of the Ottoman Sultans in Constantinople. Due to his proximity to the Sultan and the role the harem ladies played in court intrigues, the post ranked among the most important in the Ottoman Empire until the early 19th century. Soon after its creation and until its abolition at the end of the Ottoman Empire, the post came to be occupied by Black African eunuch slaves, and hence is also referred to as the Chief Black Eunuch.

The post of the Kizlar Agha was created in the reign of Murad III (ruled 1574–1595) in 1574, with the Ethiopian Mehmed Agha as its first occupant.[1][3] Until then, the Ottoman palace had been dominated by the white eunuchs, chiefly drawn from the Christian populations of the Balkans or the Caucasus. The 16th century, however, saw a rapid rise of the population of the Topkapi Palace, including among eunuchs, whose numbers rose from 40 under Selim (r. 1512–1520) to over a thousand under Murad III. While black eunuchs had served alongside white eunuchs in the palace, by 1592, for reasons that are unclear, both a separation of roles as well as the ascendancy of the black eunuchs over the white ones had become established: white eunuchs were restricted to the supervision of the male pages (içoğlan), while black eunuchs took over the far more prestigious supervision of the private apartments of the Sultan and the palace women (harem).[4] Consequently the Chief Black Eunuch quickly eclipsed the "Chief White Eunuch" or Kapi Agha (kapı ağası, "Agha of the Gate"), who had hitherto been the head of the palace personnel, and rose to become, in the words of the Orientalist C. E. Bosworth, "in practice the principal officer of the whole palace".[2][5][6] At the height of the post's power in the 17th and 18th centuries, the Kizlar Agha was a vizier of the first rank ("with three horsetails") and came third in the state hierarchy, next only to the Empire's chief minister, the Grand Vizier, and the chief religious authority, the Sheikh ul-Islam.[2][7]

The post's power derived not only from its proximity to the Sultan, but also from its association with the powerful queen-mothers, the valide sultanas, who often dominated politics (see Sultanate of Women). The Kizlar Agha was also the de facto sole intermediary between the closed world of the harem and the outer, male quarters of the palace (the selamlik), controlling its provisioning as well as the messages to and from.[6][8] In addition, he was the only individual allowed to carry the Grand Vizier's communications to the Sultan and had a recognized role in public ceremonies.[8] Among his duties in the palace was also the supervision of the education of imperial princes until they entered puberty, when they were enrolled in the palace school.[9]

In Ottoman legal theory, the Sultan was supposed to conduct affairs of state exclusively via the Grand Vizier, but in reality this arrangement was often circumvented. As the Ottomanist Colin Imber writes, the Sultan "had closer contact with the pages of the Privy Chamber, the Agha of the Gate, the Agha of the Girls or with other courtiers than he did with the Grand Vizier, and these too could petition the Sultan on their own or somebody else’s behalf. He might, too, be more inclined to take the advice of his mother, a concubine or the head gardener at the helm of the royal barge than of the Grand Vizier".[10] Thus the Kizlar Agha's political power, although exercised behind the scenes, was very considerable, influencing imperial policy and at times controlling the appointments to the grand vizierate,[8] or even intervening in dynastic disputes and the succession to the throne: it was the Kizlar Agha Mustafa Agha who secured the succession of Mustafa I (r. 1617–1618 and 1622–1623) on the throne in 1617, and in 1651 it was Suleyman Agha who murdered the powerful valide sultan Kösem on behalf of her rival and daughter-in-law, Turhan Hatice.[11]

The often pernicious influence of the Chief Black Eunuchs led to at least one attempt, by the Grand Vizier Silahdar Damat Ali Pasha in 1715, to curb their influence by prohibiting the recruitment and castration of black slaves, but this was never carried out due to his death soon after.[12] In 1731, Grand Vizier Kabakulak Ibrahim Pasha tried to force the retirement of the then incumbent, Beshir Agha the Elder, to stop him from interfering in state affairs, but through the influence of the valide sultan, Beshir secured Ibrahim's dismissal instead.[8] Beshir Agha, who held the post from 1716 until 1746, is recognized as perhaps the most powerful occupant of the office, and was engaged in "intellectual and religious pursuits" that according to Jateen lad "contributed to the Ottoman brand of Hanafi Islam and Sunni orthodoxy in general".[13]

It was not until the reforms of Sultan Mahmud II (r. 1808–1839) in the 1830s that the power of the Kizlar Agha was finally curtailed, and its holders confined to their palace and ceremonial role, which continued until the end of the Ottoman Empire.[12] 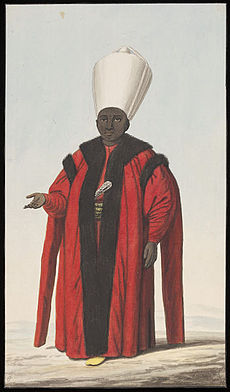 The Kizlar Agha also held a special role as the administrator (nazir) of the charitable foundations and endowments (vakifs) designated for the upkeep of the two holy cities (al-Haramayn) of Islam, Mecca and Medina, being responsible for their supply as well as for the annual ritual sending of gifts (sürre) to them.[2][8][14] Vakifs designated for the upkeep of the Muslim holy places had been established by members of the Ottoman court since early times, and their administration entrusted to special departments already since the late 15th century. Initially under the overall supervision of the Kapi Agha, in 1586 Murad III transferred the responsibility to the Kizlar Agha.[14]

This began a long process whereby the Kizlar Agha gradually acquired a sweeping jurisdiction over the various vakifs of the Empire: already in May 1598, he acquired control of the foundations allocated to the upkeep of the imperial mosques in the capital, followed soon after by vakifs in both Constantinople and other parts of the Empire, often entrusted to his care by the ladies of the palace.[14] Among the possessions that fell to the Kizlar Agha in this way was the city of Athens, the administration of which was originally granted to Basilica, one of Sultan Ahmed I's (r. 1603–1617) favourite concubines, who hailed from the city and who, having received many complaints of its maladministration, obtained its possession as a gift from the sultan. After her death, Athens came under the purview of the Kizlar Agha.[15]

The administration of the vakifs was exercised through two subordinates, the chief secretary (yazici) and the inspector of vakifs (müfettiş), and was divided into two fiscal departments: the haremeyn muhasebesi kalemi, which by the late 18th century supervised the imperial mosques and the vakifs of Istanbul and European provinces, and the haremeyn mukataasi kalemi, which supervised the vakifs of the Asian and African provinces. A special treasury, the haremeyn dolabi, contained the revenue from the vakifs, and the Kizlar Agha held a weekly council (divan) to examine the accounts.[14]

The administration of the vakifs was yet another "source of power and profit" (B. Lewis) for the Kizlar Agha, and unsuccessful attempts were made in the reigns of Mustafa III (r. 1757–1774) and Abdul Hamid I (r. 1774–1789) to remove them from his jurisdiction.[14] Finally, in 1834, Mahmud II deprived the post of the lucrative supervision of the vakifs and granted it to a new Ministry of Vakifs.[12][14] 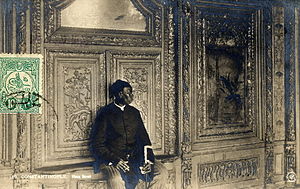 Black slaves, usually purchased as boys from Nubia, then castrated and inducted into the palace service, had begun to be employed as the guards of the women of the Sultan's harem since the time of Murad III's predecessor, Selim II (r. 1566–1574), and continued to do so until the Ottoman Empire's end.[9][16] The eunuchs usually received flower names, and after a period of training in the palace school, they entered service in the harem.[9] The eunuchs began at the post of ordinary recruit (en aşağı, literally "the lowest", and acemi ağa, "the untrained"), and gradually advanced through the ranks, from nevbet kalfa ("watch substitute") to senior posts in the guard of the harem.[7][17] Having completed their training and after a period of service, some were detached from guard duties and transferred to the attendance of the inhabitants of the harem: the Sultan's personal attendants (müsahip ağaları), the seven eunuch servants plus a head eunuch (baş ağa) attached to each valide, principal wife (kadın), or prince (şehzade), the eunuch imams who led harem prayers, the harem's treasurer (haznedar ağası), or the müsendereci, who supervised the work of the other eunuchs.[7] The senior-most eunuchs were known as hasıllı, from an Arabic word meaning "product".[17]

From these senior posts a eunuch could be selected and appointed to the post of Kizlar Agha by imperial decree (hatt-ı hümayun) and the ceremonial receipt of a robe of office (hil'at) from the Sultan. Alongside the lands belonging to the office, the Kizlar Agha usually received a personal fief (hass).[7] In the Topkapi Palace, the Kizlar Agha had his own spacious apartment near the Aviary Gate, while the other eunuchs under his supervision lived together in cramped and rather squalid conditions in a three-storey barracks.[9][18] When they were dismissed, the Chief Black Eunuchs received a pension (asatlık, literally "document of liberty") and from 1644 on were exiled to Egypt or the Hejaz.[1][7] As a result, serving Kizlar Aghas often took care to prepare for a comfortable retirement in Egypt by buying property and establishing vakifs of their own there. Thus they became local grandees and played an important role in patronizing trade and agriculture. In addition, given the important role Egypt played in the provisioning of the two holy cities, for which the Kizlar Aghas were particularly responsible while in office, the aghas and their agents (wakils) came to play a very important role in the economy of Egypt under Ottoman rule.[19]

The careers of a great number of Kizlar Aghas are known from the Hamiletü’l-kübera of the late 18th-century Ottoman statesman and historian Ahmed Resmî Efendi, listing the occupants of the office from Mehmed Agha (1574–90) until Moralı Beshir Agha (1746–52). The work is complemented by select biographies in the Sicill-i Osmani by the late 19th-century scholar Mehmed Süreyya Bey, while information on the history and evolution of the office in the institutional framework of the Ottoman palace is contained in Tayyarzade Ahmed Ata's Tarih-i Ata (1876).[20]