Kizzuwatna (or Kizzuwadna; in Ancient Egyptian Kode), is the name of an ancient Anatolian kingdom in the 2nd millennium BC. It was situated in the highlands of southeastern Anatolia, near the Gulf of İskenderun in modern-day Turkey. It encircled the Taurus Mountains and the Ceyhan river. The center of the kingdom was the city of Kummanni, situated in the highlands. In a later era, the same region was known as Cilicia. 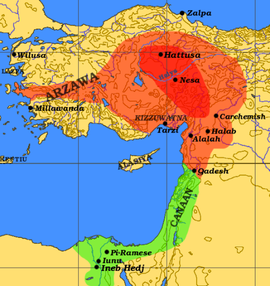 The expanded Hittite Empire (red) replaces Hatti, including Arzawa and Kizzuwatna ca. 1290 BC and borders the Egyptian kingdom (green)

The country possessed valuable resources, such as silver mines in the Taurus Mountains. The slopes of the mountain range are still partly covered by woods. Annual winter rains made agriculture possible in the area at a very early date (see Çatal Hüyük). The plains at the lower course of the Ceyhan river provided rich cultivated fields.

Several ethnic groups coexisted in the Kingdom of Kizzuwatna. The Hurrians inhabited this area at least since the beginning of the 2nd millennium BC. The Hittite expansion in the early Old Kingdom period (under Hattusili I and Mursili I) was likely to bring the Hittites and the Luwians to southeastern Anatolia. The Luwian language was part of the Indo-European language group, with close ties to the Hittite language. Both the local Hittites and the Luwians were likely to contribute to the formation of independent Kizzuwatna after the weakening of the Hittite Old Kingdom. The toponym Kizzuwatna is possibly a Luwian adaptation of Hittite *kez-udne 'country on this side (of the mountains)', while the name Isputahsu is definitely Hittite and not Luwian (Yakubovich 2010, pp. 273–4). Hurrian culture became more prominent in Kizzuwatna once it entered the sphere of influence of the Hurrian kingdom of Mitanni.

Puduhepa, queen of the Hittite king Hattusili III, came from Kizzuwatna, where she had been a priestess. Their pantheon was also integrated into the Hittite one, and the goddess Hebat of Kizzuwatna became very important in Hittite religion towards the end of the 13th century BC. A corpus of religious texts called the Kizzuwatna rituals was discovered at Hattusa.

King Sargon of Akkad claimed to have reached the Taurus mountains (the silver mountains) in the 23rd century BC. However, archaeology has yet not confirmed any Akkadian influence in the area. The trade routes from Assyria to the karum in the Anatolian highlands went through Kizzuwatna by the early 2nd millennium BC.

The kings of Kizzuwatna of the 2nd millennium BC had frequent contact with the Hittites to the north. The earliest Hittite records seem to refer to Kizzuwatna and Arzawa (Western Anatolia) collectively as Luwia.

In the power struggle that arose between the Hittites and the Hurrian kingdom of Mitanni, Kizzuwatna became a strategic partner due to its location. Isputahsu made a treaty with the Hittite king Telepinu. Later, Kizzuwatna shifted its allegiance, perhaps due to a new ruling dynasty. The city state of Alalakh to the south expanded under its new vigorous leader Idrimi, himself a subject of the Mitannian king Barattarna. King Pilliya of Kizzuwatna had to sign a treaty with Idrimi. Kizzuwatna became an ally of Mitanni from the reign of Shunashura I, until the Hittite king Arnuwanda I overran the country and made it a vassal kingdom.

Kizzuwatna rebelled during the reign of Suppiluliuma I, but remained within the Hittite empire for two hundred years. In the famous Battle of Kadesh (c. 1274 BC), Kizzuwadna supplied troops to the Hittite king.

After the fall of the Hittite empire, several minor Neo-Hittite kingdoms emerged in the area, such as Tabal, Kammanu and Quwe.

† Š represents a "s" sound (as in "sun") in Hittite and Luwian transliteration, despite the fact that š usually represents "sh" (as in "shun") in other languages.