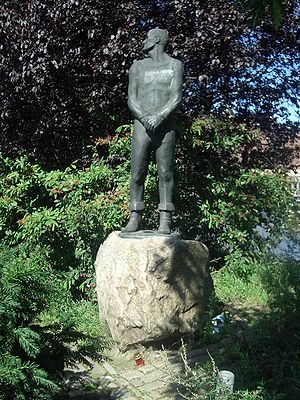 Skull alleged to have belonged to Störtebeker, found in 1878 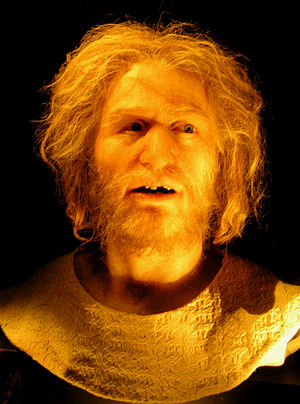 Reconstruction of skull alleged to have belonged to Störtebeker 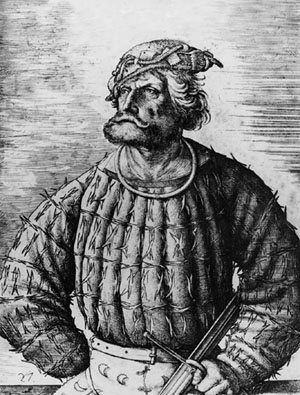 Portrait (Etching) of Kunz von der Rosen the court jester of emperor Maximilian I by Daniel Hopfer, which is often erroneously identified as a portrait of Klaus Störtebeker

Nikolaus Storzenbecher, or Klaus Störtebeker (c. 1360 in Wismar – 20 October 1401 {1400} in Hamburg), was a leader and the best known representative of a companionship of privateers known as the Victual Brothers (German: Vitalienbrüder). The Victual Brothers (Latin "victualia") were originally hired during a war between Denmark and Sweden to fight the Danish and supply the besieged Swedish capital Stockholm with provisions. After the end of the war, the Victual Brothers continued to capture merchant vessels for their own account and named themselves "Likedeelers" (literally: equal sharers).[1][2]

A large number of myths and legends surround the few facts known about Klaus Störtebeker's life. Störtebeker is both a nickname and a surname (in 2015 ca. 200 persons in Northern Germany with the surname Störtebeker), meaning "empty the mug with one gulp" in Low Saxon. The moniker refers to the pirate's supposed ability to empty a four-litre (1.06 US gal) mug of beer in one gulp. At this time, pirates and other fugitives from the law often adopted a colorful nom de guerre.

Born in the Baltic port of Wismar, Störtebeker entered public consciousness around 1398, after the expulsion of the Victual Brothers from the Baltic island of Gotland, where they had set up a stronghold and headquarters in the town of Visby. During the following years, Störtebeker and some of his fellow captains (the most famous of whom were Gödeke Michels, Hennig Wichmann and Magister Wigbold) captured Hanseatic ships, irrespective of their origin.[3]

Störtebeker had a stronghold in Marienhafe, East Frisia, dating from about 1396. He married a daughter of the East Frisian chieftain, Keno ten Broke (ca 1310-1376). There still exists a tower bearing his name (Störtebekerturm) at the Evangelical Lutheran Marienkirche in Marienhafe.[4] [5]

According to legend, in 1401, a Hamburgian fleet led by Simon of Utrecht caught up with Störtebeker's force near Heligoland. According to some stories, Störtebeker's ship had been disabled by a traitor who cast molten lead into the links of the chain which controlled the ship's rudder. Störtebeker and his crew were captured and brought to Hamburg, where they were tried for piracy. Legend says that Störtebeker offered a chain of gold long enough to enclose the whole of Hamburg in exchange for his life and freedom. However, Störtebeker and all of his 73 companions were sentenced to death and were beheaded on the Grasbrook. The most famous legend of Störtebeker relates to the execution itself. Störtebeker is said to have asked the mayor of Hamburg to release as many of his companions as he could walk past after being beheaded. Following the granting of this request and the subsequent beheading, Störtebeker's body arose and walked past eleven of his men before the executioner tripped him with an outstretched foot. Nevertheless, the eleven men were executed along with the others. The senate of Hamburg asked the executioner if he was not tired after all this, but he replied he could easily execute the whole of the senate as well. For this, he himself was sentenced to death and executed by the youngest member of the senate.[6]

According to legend (but not to history) when dismantling Störtebeker's ship, it was found the masts contained a core of gold (one of gold, one of silver, and one of copper). This was used to create the tip of St. Catherine's church in Hamburg. His famous drinking cup was stored in the town hall of Hamburg, until it was destroyed in the great fire of 1842.[7]

Recent events have suggested it is more likely that Störtebeker and his crew died in 1400. A bill for digging graves for 30 Victual Brothers dated to this year survives in the Hamburg records. This would also suggest the story that Störtebeker was sentenced to death with 70 other privateers is at least misleading; at minimum, he certainly was buried with 30 other men. The year 1400 also excludes the involvement of Simon of Utrecht and the Brindled Cow (Bunte Kuh), since the records show this ship was not completed until 1401. In fact, the Hanseatic fleet that attacked Störtebeker was commanded by Hermann Langhe (also Lange) and Nikolaus Schoke (Nicoalus Schocke), who set sail for Heligoland in August 1400, and the course of the battle is not described by any reliable sources.[8]

No authentic portrait of Störtebeker is known. An etching made by Fifteenth century German artist Daniel Hopfer, often erroneously identified as a portrait of Klaus Störtebeker, is actually of Kunz von der Rosen (1470-1519), court jester of Emperor Maximilian I. However, a tentative reconstruction of Störtebeker's appearance has been made using a skull alleged to be his. This skull, displayed at the museum since 1922, was stolen in January 2010.[9] In March 2011 it was found by the police.[10]

Störtebeker was portrayed on television by Ken Duken in Störtebeker, a 2006 miniseries based very loosely on his life. He was also the subject of a 2007 documentary and of the feature-length movie 12 Paces Without a Head, in the making in 2008.[14][15]