From Infogalactic: the planetary knowledge core
Jump to: navigation, search
This article is about the Norse merchant ship. For the modern yacht, see Knarr (type of yacht). 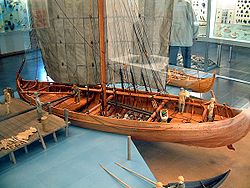 Model of a knarr in the Hedeby Viking Museum in Germany

A knarr /nɔːr/ is a type of Norse merchant ship used by the Vikings. The knarr (Old Norse: knǫrr, plural knerrir) was constructed using the same clinker-built method as longships, karves, and faerings.

Knarr is the Old Norse term for a type of ship built for long sea voyages and used during the Viking expansion. The knarr was a cargo ship; the hull was wider, deeper and shorter than a longship, and could take more cargo and be operated by smaller crews. They were built with a length of about 16 m (54 ft), a beam of 5 m (15 ft), and a hull capable of carrying up to 24 tons.[ambiguous][1] It was primarily used to transport trading goods like walrus ivory, wool, timber, wheat, furs and pelts, armour, slaves, honey, and weapons. It was also used to supply food, drink, weapons and armour to warriors and traders along their journeys across the Baltic, the Mediterranean and other seas. Knerrir routinely crossed the North Atlantic carrying livestock such as sheep and horses, and stores to Norse settlements in Iceland, Greenland and Vinland as well as trading goods to trading posts in the British Isles, Continental Europe and possibly the Middle East. They may have been used in colonising, although a similar small cargo vessel (the byrthing) is another possibility.

The only well preserved knarr that has been found, was in a shallow channel in Roskilde Fjord in Denmark in 1962. Known as Skuldelev 1, it was placed among two warships, a Baltic trader, and a ferryboat. Archaeologists believe that the ships were placed there to block the channel against enemy raiders. Today all five ships, known as the Skuldelev ships, are exhibited at the Viking Ship Museum in Roskilde.