Knattspyrnufélag Reykjavíkur, (English: Reykjavík F.C.),[citation needed] often shortened to KR or KR Reykjavík, is an Icelandic football club based in the capital, Reykjavík.

KR playing Fram in the inaugural Icelandic football season in 1912.

KR was established on 16 February 1899, making it the oldest football club in Iceland. It was founded as Fótboltafélag Reykjavíkur (Reykjavík Football Club), before changing to Knattspyrnufélag Reykjavíkur, also meaning Reykjavík Football Club, the change due to "knattspyrna" being considered a more elegant word ("Fótbolti" is literally translated as "football" while "knattspyrna", while translating as "football", is literally "ballkicking"). KR modelled their kit on the black-and-white stripes of Newcastle United, a strong club during KR's early years. KR was the only football club in Reykjavík for a decade, but as soon as other clubs were established there were plans for competitions. KR won the inaugural championship in 1912 after a play-off with Fram.

KR won their twentieth title in 1968. They were relegated for the first time to the Second Division in 1977 narrowly missed winning the first division in 1990, 1996 and 1998, when KR lost out in the title race on the final day, all of which strengthened the solidarity within the club.[1]

In KR’s centenary year in 1999 the team ended its long quest for another national title. The team had not won the league title for 31 years despite often being viewed as favourites but they looked favourites all season this time. They clinched the title with a 4–0 win over Víkingur in the penultimate round and then beat ÍA 3–1 in the cup final in front of a capacity crowd at the national stadium. The women's team was equally successful, winning the league and the cup, and KR celebrated its centenary year with an unprecedented double-double.[1]

KR's home shirt from 2007–09, manufactured by Nike and sponsored by Shell Oil.

KR play, as previously stated, in black and white stripes in honour of Newcastle United. The current sponsor of KR is the Icelandic transportation giant Eimskip. Above the club badge on the shirt, although not featured on replica shirts, there are five stars, each representing 5 of KR's 25 league titles. On 20 October 2006, KR introduced a new deal with sport equipment manufacturer Nike and the team will wear products from Nike for the 2007 season. 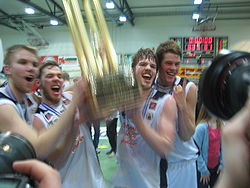 Besides football, which is the original sport for which the club was founded, KR today also practices basketball, badminton, table tennis, bowling, darts, team handball, skiing, Icelandic wrestling and swimming.

KR has been playing at their own ground, KR-völlur in the west-end of Reykjavík, since 1984, having previously played at the national stadium (Laugardalsvöllur) and the old municipal stadium (Melavöllur). KR has had the highest attendances for the last nine years. Only 376 attended the first match at KR-völlur in 1984 but in the centenary year an average crowd of 2,501 saw KR’s home matches, which roughly 1% of the Icelandic nation. 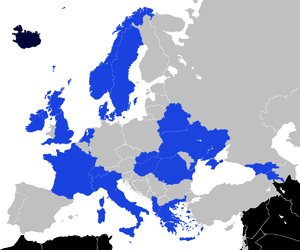 KR have played a European match against one or more teams from each one of the 21 countries shaded in blue on this map.