With the population boom experienced in the North Carolina Research Triangle area in the past two decades, Knightdale has become a part of the metro region and a suburb of Raleigh, bordering that city at the Neuse River. The population of the Raleigh-Durham-Cary Combined Statistical Area (CSA) was 1,749,525 as of the 2010 census, with the Raleigh-Cary Metropolitan Statistical Area (MSA) portion containing 1,130,490 residents.[6] At least one media outlet predicts the three-county Research Triangle region will be the fastest-growing metro region in the nation between 2005 and 2025.[7]

In 1700, the Lords Proprietor of the Carolina Colony hired John Lawson to explore the area. He began his 1,000-mile (1,600 km) trek near present-day Charleston, South Carolina, and according to his diary, passed through the area sometime in February 1701. He wrote about a meeting with the Tuscarora Native American tribe on the banks of the Neuse River, and with the help of an interpreter, Lawson made peace with the Tuscarora.

After receiving the report from Lawson, the King of England began to apportion these lands to willing settlers. In 1730, John Hinton settled in what would one day be called Knightdale in an area near the Neuse River, not far from where Hodge Road and Old Faison Road now intersect.

When the American Revolution began, Hinton switched his allegiance to the colonials. He became a military leader and played a key role in the first battle of the American Revolution fought on North Carolina soil, the Battle of Moore's Creek Bridge. Hinton owned seven plantations in the Knightdale area, of which three are still intact: The Oaks, Midway, and Beaver Dam.

After independence, the population of the area began to increase, with farmers growing products such as tobacco and cotton. Although slavery was not prominent in Knightdale like locations in the Deep South, it was still visible in the area. There are unmarked grave plots for slaves throughout Knightdale. Although documentation of grave sites has been lost, the burials remain a significant part of the local landscape.

During the Civil War, the Confederate and Union armies were present in the area. The Clay Hill and Midway plantations saw the greatest damage, and after the war had ended, the residents began to rebuild. During this time, nearby Raleigh experienced a population boom. As a result, local leaders redrew the map of Wake County and divided it into townships. The area that became Knightdale was located in St. Matthew's Township, where it still is today.

For many years the Knightdale area was a crossroads served only by a post office. By the end of the 19th century, locals decided there was a need to establish a town. Henry Haywood Knight donated some of his land holdings in the area to the Norfolk and Southern Railroad Company in order to entice the company to build a railroad that would provide freight and passenger service. Although Knight did not live to see the railroad arrive in Knightdale, not long after his death in 1904, the railroad finally came to the community that would bear his name.

After the railroad and depot were built, the area began to develop quickly. Norfolk and Southern moved families into the community to take care of the railroad, and many of the older homes that exist today in Knightdale were built specifically for the use of railroad workers and their families. The first railroad stationmaster's house can still be seen along the tracks on Railroad Street.

As the community continued to grow, Knightdale received its articles of official incorporation from the North Carolina Legislature on March 9, 1927, with the first mayor being Bennett L. Wall.

On February 7, 1940, a fire broke out in the center of town. The townspeople turned out to help extinguish the fire, but the fire was not brought under control until firefighters arrived from Raleigh with an adequate water supply. Several businesses and homes were destroyed and the townspeople rebuilt the historic downtown area. 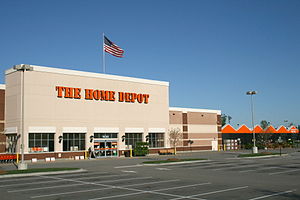 Home Depot hardware store on US 64 in Knightdale

After World War II, the population of Knightdale grew at a steady pace, thanks to the Baby Boom. The corner drugstore, the bank, and the barber shop located on First Avenue served as places of business, as well as places for social gatherings. Movies were often shown on the wall of the old bank building, which is located at the intersection of First Avenue and Main Street. In 1952 a municipal water system was installed.

Beginning in the 1960s the majority of new businesses in Knightdale began locating along US 64. With the addition of the Mingo Creek sewer outfall in the late 1980s, development on the south side of US 64 began. Subdivisions such as Parkside, Planter's Walk and Mingo Creek subdivisions were built, rapidly increasing the town's population. Between 1990 and 2000 Knightdale's population increased from 1,700 to more than 6,000 residents, making it the seventh fastest-growing town in North Carolina.[8]

Frankie Muniz, a popular television and film actor, grew up in Knightdale. He started his acting career performing the role of Tiny Tim in "A Christmas Carol" for three years. Nominations for his performances include the Hollywood Reporter Young Star Award and the Young Artist of Hollywood Award. He currently resides in Scottsdale, Arizona.

Knightdale has a Council-manager government. Under this system the citizens elect a mayor and five council members as the town's governing body. The council then appoints the Town Manager who serves at the discretion of the council. Council members are elected to four-year terms. Three of the members are elected in one year, and the two remaining members and the mayor are elected two years later. The mayor, as the principal elected official of the town, provides leadership to the governing body and the community, and presides over board meetings.

The current mayor is Russell Killen, and current town council members include Mike Chalk (Mayor Pro Tem), Jeff Eddins, Dr. Tim Poirier, James Roberson, and Dustin Tripp. The immediate past mayor is Doug Boyd. Prior to that Jeanne Bonds[10] was the first female mayor of the town. Other previous mayors include Joe Bryan and Billy Wilder.[11]

Knightdale is located in the northeast central region of North Carolina, where the North American Piedmont and Atlantic Coastal Plain regions meet. This area is known as the "fall line" because it marks the elevation inland at which waterfalls begin to appear in creeks and rivers. Its central Piedmont location and access to large highways places Knightdale a little over two hours northwest of Wrightsville Beach, NC by car and four hours east of the Great Smoky Mountains.

Among adults age 25 and older, 41.2% had at a bachelor's degree or higher; 93% had earned at least a high school degree.

There were 3,754 households, out of which the Census counted 2,760 as family households; 45.9% of households had children under the age of 18 living with them, 61.0% were married couples living together, 7.3% had a female householder with no husband present. The average household size was 2.89 and the average family size was 3.47.[16] 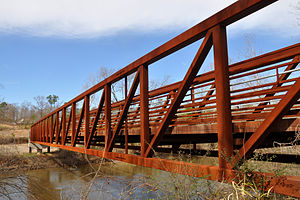 Knightdale is served by two parks and two community centers. The Eugene F. Harper Memorial Park is located downtown next to the Harper Park Community Center. The Knightdale Recreation Center is attached to Forestville Elementary's gym. The Knightdale Environmental Park is a trail system that is located in the southern portion of Knightdale.[19]

The Mingo Creek Greenway was completed in July, 2014.[21] The 3.5 mile, 10-foot wide trail connects Mingo Creek Park in the east to the 33-mile City of Raleigh's Neuse River Trail in the west.[22] The two trails connect over a newly opened pedestrian bridge that spans the Neuse River. 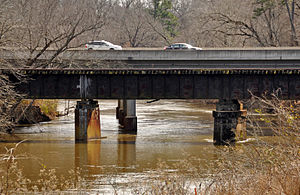 Knightdale is located off a recently completed portion of Interstate 540 that connects the town to North Raleigh, RDU, the Research Triangle Park, Apex, and Morrisville. The Knightdale Bypass is a six-lane freeway that bypasses the town to ease traffic in eastern Wake County. US 64 and US 264 have been rerouted onto the Knightdale Bypass which travels from Raleigh's Inner Loop (Interstate 440) to the US 64/264 freeway near Zebulon. An interchange with the eastern segment of Raleigh's Outer Loop I-540 opened in January 2007. This interchange makes the Knightdale Bypass a key connector between Raleigh's two loops. US 64 and US 264's previous alignment has been given the designation Business US 64. It travels through the town of Knightdale, ending in the east near Zebulon and in the west at I-440 in Raleigh.