The Round Table is King Arthur's famed table in the Arthurian legend, around which he and his Knights congregate. As its name suggests, it has no head, implying that everyone who sits there has equal status. The table was first described in 1155 by Wace, who relied on previous depictions of Arthur's fabulous retinue. The symbolism of the Round Table developed over time; by the close of the 12th century it had come to represent the chivalric order associated with Arthur's court, the Knights of the Round Table.

The Round Table first appears in Wace's Roman de Brut, a Norman language adaptation of Geoffrey of Monmouth's Historia Regum Britanniae finished in 1155. Wace says Arthur created the Round Table to prevent quarrels among his barons, none of whom would accept a lower place than the others.[1] Layamon added to the story when he adapted Wace's work into the Middle English Brut in the early 13th century, saying that the quarrel between Arthur's vassals led to violence at a Yuletide feast. In response a Cornish carpenter built an enormous but easily transportable Round Table to prevent further dispute.[1] Wace claims he was not the source of the Round Table; both he and Layamon credited it instead to the Bretons. Some scholars have doubted this claim, while others believe it may be true.[1] There is some similarity between the chroniclers' description of the Round Table and a custom recorded in Celtic stories, in which warriors sit in a circle around the king or lead warrior, in some cases feuding over the order of precedence as in Layamon.[1] There is a possibility that Wace, contrary to his own claims, derived Arthur's round table not from any Breton source, but rather from medieval biographies of Charlemagne—notably Einhard's Vita Caroli and Notker the Stammerer's De Carolo Magno—in which the king is said to have possessed a round table decorated with a map of Rome.[2]

Though the Round Table itself is not mentioned until Wace, the concept of Arthur having a marvelous court made up of many prominent warriors is much older. Geoffrey of Monmouth says that after establishing peace throughout Britain, Arthur "increased his personal entourage by inviting very distinguished men from far-distant kingdoms to join it."[3] The code of chivalry so important in later romance figures in as well, as Geoffrey says Arthur established "such a code of courtliness in his household that he inspired peoples living far away to imitate him."[3] Long before Geoffrey, Arthur's court was well known to Welsh storytellers; in the romance Culhwch and Olwen, written around 1100, the protagonist Culhwch invokes the names of 225 individuals affiliated with Arthur.[4] In fact, the fame of Arthur's entourage became so prominent in Welsh tradition that in the later additions to the Welsh Triads, the formula tying named individuals to "Arthur's Court" in the triad titles began to supersede the older "Island of Britain" formula.[5] Though the code of chivalry crucial to later continental romances dealing with the Round Table is mostly absent from the earlier Welsh material, some passages of Culhwch and Olwen seem to prefigure it, for instance when Arthur explains the ethos of his court, saying "[w]e are nobles as long as we are sought out: the greater the bounty we may give, the greater our nobility, fame and honour."[6]

Though no Round Table appears in the early Welsh texts, Arthur is associated with various items of household furniture. The earliest of these is Saint Carannog's mystical floating altar in that saint's 12th century Vita; in the story Arthur has found the altar and attempts unsuccessfully to use it for a table, and returns it to Carannog in exchange for the saint ridding the land of a meddlesome dragon.[7] Arthur's household furniture figures into local topographical folklore throughout Britain as early as the early 12th century, with various landmarks being named "Arthur's Seat", "Arthur's Oven," and "Arthur's Bed-chamber."[8] A henge at Eamont Bridge near Penrith, Cumbria is known as "King Arthur's Round Table".[9] The still-visible Roman amphitheatre at Caerleon has been associated with the Round Table.[10] and has been suggested as a possible source for the legend.[11]

In 2010, following archaeological discoveries at the Roman ruins in Chester, some writers suggested that the Chester Roman Amphitheatre was the true prototype of the Round Table[12] but the English Heritage Commission, acting as consultants to a History Channel documentary in which the claim was made, declared that there was no archaeological basis to the story.[13] 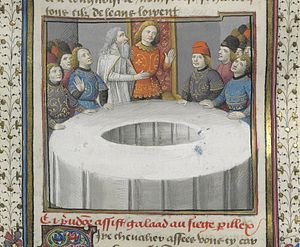 The Round Table takes on new dimensions in the romances of the late 12th and early 13th century, where it becomes a symbol of the famed order of chivalry which flourishes under Arthur. In Robert de Boron's Merlin, written around the 1190s, the wizard Merlin creates the Round Table in imitation of the table of the Last Supper and of Joseph of Arimathea's Holy Grail table. This table, here made for Arthur's father Uther Pendragon rather than Arthur himself, has twelve seats and one empty place to mark the betrayal of Judas. This seat must remain empty until the coming of the knight who will achieve the Grail. The Didot Perceval, a prose continuation of Robert's work, takes up the story, and the knight Percival sits in the seat and initiates the Grail quest.[1]

The prose cycles of the 13th century, the Lancelot-Grail cycle and the Post-Vulgate Cycle, further adapt the chivalric attributes of the Round Table. Here it is the perfect knight Galahad, rather than Percival, who assumes the empty seat, now called the Siege Perilous. Galahad's arrival marks the start of the Grail quest as well as the end of the Arthurian era.[1] In these works the Round Table is kept by King Leodegrance of Cameliard after Uther's death; Arthur inherits it when he marries Leodegrance's daughter Guinevere. Other versions treat the Round Table differently, for instance Italian Arthurian works often distinguish between the "Old Table" of Uther's time and Arthur's "New Table."[14] 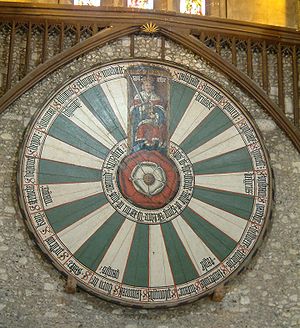 During the Middle Ages, festivals called Round Tables were celebrated throughout Europe in imitation of Arthur's court. These events featured jousting, dancing, and feasting, and in some cases attending knights assumed the identities of Arthur's entourage.[15] The earliest of these was held in Cyprus in 1223 to celebrate a knighting. Round Tables were popular in various European countries through the rest of the Middle Ages and were at times very elaborate; René of Anjou even erected an Arthurian castle for his 1446 Round Table.[15] On December 19, 1566, Mary, Queen of Scots gave a feast in Stirling Castle with 30 guests at an imagined replica of Arthur's table during the masque-themed celebrations of the baptism of the future James VI.[16][17]

The artifact known as the "Winchester Round Table," a large tabletop hanging in Winchester Castle bearing the names of various knights of Arthur's court, was probably created for a Round Table tournament.[18] The current paintwork is late; it was done by order of Henry VIII of England for Holy Roman Emperor Charles V's 1522 state visit, and depicts Henry himself sitting in Arthur's seat above a Tudor rose. The table itself is considerably older; dendrochronology calculates the date of construction to 1250–1280—during the reign of Edward I—using timber from store felled over a period of years.[19] Edward was an Arthurian enthusiast who attended at least five Round Tables and hosted one himself in 1299, which may have been the occasion for the creation of the Winchester Round Table.[18] Martin Biddle, from an examination of Edward's financial accounts, links it instead with a tournament Edward held near Winchester on April 20, 1290, to mark the betrothal of one of his daughters.[20]