In mathematics, Knuth's up-arrow notation is a method of notation for very large integers, introduced by Donald Knuth in 1976.[1] It is closely related to the Ackermann function and especially to the hyperoperation sequence. The idea is based on the fact that multiplication can be viewed as iterated addition and exponentiation as iterated multiplication. Continuing in this manner leads to iterated exponentiation (tetration) and to the remainder of the hyperoperation sequence, which is commonly denoted using Knuth arrow notation.

The ordinary arithmetical operations of addition, multiplication and exponentiation are naturally extended into a sequence of hyperoperations as follows.

Multiplication by a natural number is defined as iterated addition:

Exponentiation for a natural power

is defined as iterated multiplication, which Knuth denoted by a single up-arrow:

Here and below evaluation is to take place from right to left, as Knuth's arrow operators (just like exponentiation) are defined to be right-associative.

According to this definition,

This already leads to some fairly large numbers, but Knuth extended the notation. He went on to define a “triple arrow” operator for iterated tetration (pentation):

followed by a “quadruple arrow“ operator for iterated pentation (hexation):

and so on. The general rule is that an

-arrow operator expands into a right-associative series of (

is commonly used to denote

with n arrows. In fact,

is a [n+2] b with hyperoperation. For example,

In expressions such as

, the notation for exponentiation is usually to write the exponent

as a superscript to the base number

. But many environments — such as programming languages and plain-text e-mail — do not support superscript typesetting. People have adopted the linear notation

for such environments; the up-arrow suggests 'raising to the power of'. If the character set doesn't contain an up arrow, the caret (^) is used instead.

doesn't lend itself well to generalization, which explains why Knuth chose to work from the inline notation

is a shorter alternative notation for n uparrows. Thus

If b is a variable (or is too large), the power tower might be written using dots and a note indicating the height of the tower.

Continuing with this notation,

could be written with a stack of such power towers, each describing the size of the one above it.

Again, if b is a variable or is too large, the stack might be written using dots and a note indicating its height. 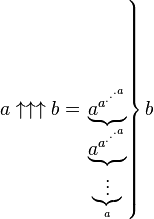 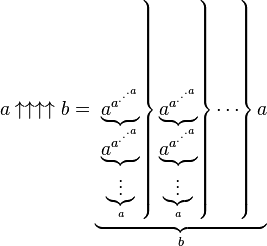 allows us to make these diagrams slightly simpler while still employing a geometric representation (we could call these tetration towers). 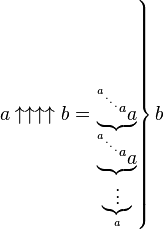 Finally, as an example, the fourth Ackermann number

could be represented as:

Some numbers are so large that multiple arrows of Knuth's up-arrow notation become too cumbersome; then an n-arrow operator

is useful (and also for descriptions with a variable number of arrows), or equivalently, hyper operators.

Some numbers are so large that even that notation is not sufficient. The Conway chained arrow notation can then be used: a chain of three elements is equivalent with the other notations, but a chain of four or more is even more powerful.

It is generally suggested[by whom?] that Knuth's arrow should be used for smaller magnitude numbers, and the chained arrow or hyper operators for larger ones.

The up-arrow notation is formally defined by

This definition takes multiplication as the basic operation

as repeated exponentiation, etc. (This is equivalent to the hyperoperation sequence except it omits the two more-basic operations of successor and addition, inclusion of which requires additional starting values that somewhat complicate the definition.)

All up-arrow operators (including normal exponentiation,

) are right associative, i.e. evaluated from right to left in an expression.

Note that due to right-associativity we have, for

for the bth functional power of the function

, the original definition can therefore be written more concisely as follows:

can be restated in terms of an infinite table. We place the numbers

in the top row, and fill the left column with values 2. To determine a number in the table, take the number immediately to the left, then look up the required number in the previous row, at the position given by the number just taken.

The table is the same as that of the Ackermann function, except for a shift in

, and an addition of 3 to all values.

We place the numbers

in the top row, and fill the left column with values 3. To determine a number in the table, take the number immediately to the left, then look up the required number in the previous row, at the position given by the number just taken.

We place the numbers

in the top row, and fill the left column with values 10. To determine a number in the table, take the number immediately to the left, then look up the required number in the previous row, at the position given by the number just taken.

Numeration systems based on the hyperoperation sequence

R. L. Goodstein,[2] with a system of notation different from Knuth arrows, used the sequence of hyperoperators here denoted by

to create systems of numeration for the nonnegative integers. Letting superscripts ([1], [2], [3], [4], ... ) denote the respective hyperoperators

, the so-called complete hereditary representation of integer n, at level k and base b, can be expressed as follows using only the first k hyperoperators and using as digits only 0, 1, ..., b - 1, together with the base b itself:

Any xi exceeding b-1 is then re-expressed in the same manner, and so on, repeating this procedure until the resulting form contains only the digits 0, 1, ..., b-1, together with the base b.

The remainder of this section will use the superscripts to denote the hyperoperators.

Unnecessary parentheses can be avoided by giving higher-level operators higher precedence in the order of evaluation; thus,

level-1 representations have the form b [1] X, with X also of this form;