From Infogalactic: the planetary knowledge core
Jump to: navigation, search
In this Japanese name, the family name is Kondō.

As a young man he was said to be an avid reader, and especially liked the stories of the Forty-seven Ronin and the Romance of the Three Kingdoms.[5] His renown as a scholar and his fame at having defeated a group of thieves who tried to break into his family home was great, and caught the attention of Kondō Shūsuke, the third generation master of the Tennen Rishin-ryū.[6] Shūsuke wasted no time in adopting the young Katsugorō in 1849, who first took the name of Shimazaki Katsuta (島崎勝太).[7] According to a record in the possession of the former Gozu-tennōsha Shrine 牛頭天王社 (now the Hino Yasaka-jinja Shrine 日野八坂神社), Katsuta is listed, with full common name and formal name, as Shimazaki Isami Fujiwara (no) Yoshitake (島崎勇藤原義武), and thus, had the name Isami (勇) as of 1858, the document's date.[8]

Kondō is said to have owned a katana called "Kotetsu" (虎徹), the work of the 17th century swordsmith Nagasone Kotetsu. However, the authenticity of his "Kotetsu" is highly debatable. According to Yasu Kizu's pamphlet on the swordmaker Kotetsu, Kondō's sword may actually have been made by Minamoto no Kiyomaro, a swordmaker of high repute roughly contemporary to Kondō.[9]

Kondō and his wife, Otsune, were married in 1860.[10] This was an advantageous match for Kondō; Otsune was the daughter of Matsui Yasogorō (松井八十五郎), a retainer to the Shimizu-Tokugawa clan.[11] On September 30, 1861,[12] Isami became the fourth generation master (sōke no yondai me 宗家四代目) of Tennen Rishin-ryū, assuming the name Kondō Isami and taking charge of the Shieikan.[13] A year later, his daughter Tamako (1862–1886) was born.[14] Kondō's only grandson, Kondō Hisatarō, was killed in action in the Russo-Japanese War.[15] 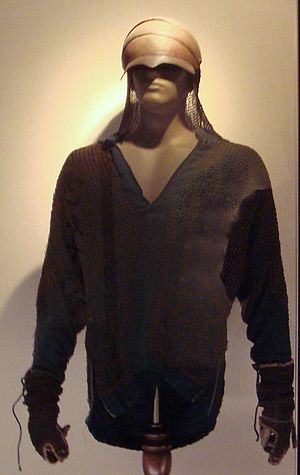 A coat of mail and helmet used by Kondo Isami for protection.

Although he was never employed by the Shogunate before his Shinsengumi days, Kondō was a candidate for a teaching position at the Kobusho in 1862.[16] The Kobusho was an exclusive military training school, primarily for the use of the shogunal retainers, set up by the Shogunate in 1855 in order to reform the military system after the arrival of Perry's Black Ships.[17]

In 1863, the Tokugawa shogunate organized a massive group of ronin for the purpose of protecting the shogun Iemochi during his time in Kyoto.[18] Kondō joined the unit, which became known as the Rōshigumi, with his close friend Hijikata Toshizō, as well as Shieikan's members and guests Yamanami Keisuke, Okita Sōji, Harada Sanosuke, Nagakura Shinpachi, Tōdō Heisuke, and Inoue Genzaburō. After the de facto commander Kiyokawa Hachirō revealed their true purpose as being Imperial supporters, Kondō, Hijikata, former Mito retainer Serizawa Kamo, and a handful of others remained in Kyoto and formed the Mibu Rōshigumi.[19] Acting under the direct orders of the shogunate,[20] Matsudaira Katamori of Aizu undertook supervision of these men. Under the oversight of Aizu, acting in its role as Protector of Kyoto, they worked as police in the imperial capital.[21]

In the August 18 incident Kinmon no Seihen, his unit was given the name Shinsengumi.[22] In July 1864, the Shinsengumi became well known for arresting a cell of shishi (the incident was known as the Ikedaya Jiken, or Ikedaya Affair).[23] 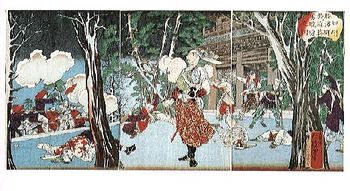 Kondō Isami at the Battle of Kōshū-Katsunuma. 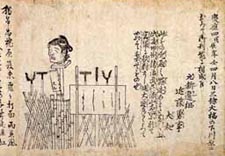 The public display of Kondō Isami's head after his decapitation. 1868 newspaper.

After the Battle of Toba-Fushimi in January 1868, he returned to Edo, and was promoted to the rank of wakadoshiyori (wakadoshiyori-kaku 若年寄格) in the rapidly disintegrating Tokugawa administration.[26] He fought with the force dispatched by the Imperial Court but lost, most notably at the battles of Kōshū-Katsunuma and Nagareyama. After surrendering, he was beheaded at Itabashi on May 17, 1868.[27]

According to Tani Tateki (1837–1911) of the Tosa han, Kondō was executed by the new government (formed mostly by the samurai of the Chōshū han and the Satsuma han) as a direct result of being accused of the murder of Sakamoto Ryōma. Even after ex-Mimawarigumi member Imai Nobuo's confession in 1870, Tani insisted that Kondō was not falsely accused for Sakamoto's murder. (Even though the most accepted theory is that the mastermind of assassination was Sasaki Tadasaburō of the Mimawarigumi, officially, it is still a mystery.)

He has several grave sites; it is believed that the first of them was the grave erected at Ten'nei-ji Temple (天寧寺) in Aizu by Hijikata Toshizō.[28] Hijikata, who was convalescing nearby from a foot injury sustained at the Battle of Utsunomiya, is said to have personally supervised the preparation and construction of the site.[28] Kondō's funerary name, Kanten'inden'junchūseigi-daikōji (貫天院殿純忠誠義大居士) is believed to have been granted by Matsudaira Katamori.[28]

Kondo Isami is often depicted in fiction, across different media, consisting of but not exclusive to television, film, books, anime, and manga.

Kondo Isao from Gintama is roughly based on him. He also appears in the video-game-turned-anime series Hakuouki Shinsengumi Kitan. Kondo also makes appearances in the series Kaze Hikaru and Peacemaker Kurogane, among others.