Konrad Ernst Eduard Henlein (6 May 1898 – 10 May 1945) was a leading Sudeten German politician in Czechoslovakia. Upon the German occupation he joined the Nazi Party as well as the SS and was appointed Reichsstatthalter of the Sudetenland in 1939.

The son of an accounts clerk was born in Maffersdorf (present-day Vratislavice nad Nisou) near Reichenberg (Liberec), in what was then the Bohemian crown land of Austria-Hungary. In light of his being a leader of the Sudeten German movement, Henlein's origin was not without problems: His mother, Hedvika (Hedwig) Anna Augusta Dvořáček, was the daughter of a German-speaking mother but her father was of Czech origin. As Henlein after 1938 pursued a Germanisation policy to non-German Aryans, therefore he was forced to change his still-living mother's name from Dvořáček to the more German spelling of Dworatschek, which would be thus more comfortable for Henlein's career as a high Nazi official.

Henlein attended business school in Gablonz (Jablonec nad Nisou) and in World War I entered military service in the Austro-Hungarian Army as a military volunteer (Kriegsfreiwilliger), assigned to k.u.k. Tiroler Kaiser-Jäger-Regiment Nr. 3. In May, 1916, he attended Officer Candidate School and then was assigned to k.u.k. Infanterie-Regiment Nr. 27 based in Graz. He saw Italian Front service in the Dolomites at Monte Forno, Mont Sief, and Monte Maletta from May, 1916 to 17 November 1917.

He was severely wounded, then captured by Italian troops, and spent the remainder of the war as a POW held in captivity at Asinara Island, where he occupied his time studying the history of the German Turner (gymnastics) movement of Friedrich Ludwig Jahn. Henlein returned home after the breakup of the Austro-Hungarian Monarchy in 1919 to work as a bank clerk in Gablonz, then part of the newly established Czechoslovakian state. Influenced by the German national movement, Henlein became a gym teacher of the gymnastics club in Asch (Aš) in 1925, which, similar to the Czech Sokol movement, took an active part in Sudeten German communal life. 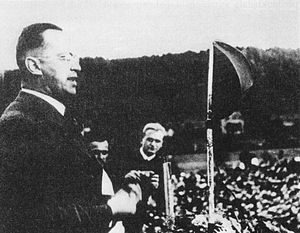 On 1 October 1933, Henlein founded the Sudetendeutsche Heimatfront ("Sudeten German Home Front", SHF). Although the SHF was originally meant as a successor organisation of the banned anti-Czech German National Socialist Workers' Party and German National Party, it soon became a big tent right-wing movement in order to achieve a status of autonomy for the German minority, rivalling with the German Social Democratic Workers Party. On 19 April 1935 the SHF was renamed Sudeten German Party (Sudetendeutsche Partei, SdP) under pressure from the Czechoslovak government.

In the first half of the 1930s, Henlein held a pro-Czechoslovak and overtly anti-Nazi view[1] in his public views and speeches. In the parliamentary election of May 1935, the SdP with massive support by the Nazi Party gained 15.2% of the votes cast, becoming the strongest of all Czechoslovak parties, and had won about 68% of the German votes. Even with the newfound power of the SdP, gained with the help of the Nazis, Henlein did not become a declared follower of Adolf Hitler until 1937; after the pro-German camp within the SdP represented by Karl Hermann Frank emerged victorious. Newer research shows his position within the SdP became very difficult, when in 1937 Heinz Rutha, one of his closest allies, was tipped off to the Czechoslovak authorities (possibly by German secret service) and imprisoned for alleged homosexuality. Henlein then swiftly aligned himself with the slogan Ein Volk, ein Reich, ein Führer! ("One People, One Country, One Leader!"), thus calling for the predominantly (typically more than 80%) German-speaking Sudetenland to be a part of Germany.

Henlein's political party's dominance of the Sudetenland in the 1930s contributed to the Munich Agreement on 30 September 1938, which was due in part to his influence with the British delegate Lord Runciman during the latter's visit of Czechoslovakia. Henlein presented his party's policy as striving to fulfill the "justified claims" of the then largely nazified German minority. Henlein, often under direct orders from Berlin, deliberately had worked to help create a sense of crisis that was useful to Hitler's diplomatic and military efforts; as he once stated, "We must make demands that cannot be satisfied". From 12 September 1938, forward, he helped organise hundreds of terrorist attacks and two coup attempts by the Sudetendeutsches Freikorps paramilitary organisation affiliated with the SS-Totenkopfverbände, immediately after Hitler's threatening speech in Nuremberg at the Nazi Party's annual rally. The attempted uprising was quickly suppressed by Czechoslovak forces, whereafter Henlein fled to Germany only to start numerous intrusions into Czechoslovak territory around Asch as a commander of Sudeten German guerilla bands. 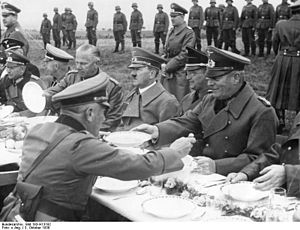 Rest during the German invasion on the road to Franzensbad: Henlein in uniform sitting between Hitler and General Wilhelm Keitel (right), 3 October 1938

Upon the Wehrmacht's entry into the Sudetenland, Henlein was appointed Reichskommissar and became a SS-Gruppenführer (later an SS-Obergruppenführer). The SdP merged with Hitler's NSDAP on 5 November 1938. Henlein joined the Nazi Party in January 1939 and was appointed to the Reichstag as a deputy.

After the German takeover of what remained of Czechoslovakia in March 1939, Heinlein served one month as head of the civil administration of the Protectorate of Bohemia and Moravia, nominally making him the number-two man in the Protectorate behind Reichsprotektor Konstantin von Neurath. However, most of the power ended up in the hands of his long-time rival Karl Hermann Frank. On 1 May 1939 Henlein was named Reichsstatthalter and Gauleiter of the newly established Reichsgau Sudetenland, a position he held until the end of the war.

His political influence was limited. He was one of the milder Nazis,[clarification needed] prompting RSHA leader Reinhard Heydrich and several others to try to remove him. However, all efforts failed due to Henlein's good relations with Hitler.

On 10 May 1945, while in American captivity in the barracks of Plzeň, he committed suicide[2] by cutting his veins with his broken glasses. He was buried anonymously in the Plzeň Central Cemetery.

In Harry Turtledove's "Hitler's War", Henlein is assassinated by a Czech named Jaroslav Stribny around 28 September 1938. Hitler, in the story, then starts World War II two days later on 30 September 1938 - almost a year earlier than it occurred in actual time line. "Henleinists" are a looming presence throughout Martha Gellhorn's novel "A Stricken Field" (1940).

Summary of his career