From Infogalactic: the planetary knowledge core
Jump to: navigation, search
For other uses, see Korg (disambiguation). 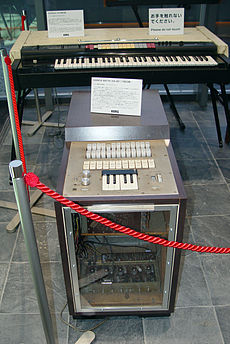 Founded in 1962 in Japan by Tsutomu Katoh and Tadashi Osanai, Korg was originally known as Keio Gijutsu Kenkyujo Ltd. and later Keio Electronic Laboratories (京王技術研究所?) because its fledgling offices were located near the Keio train line in Tokyo and Keio can be formed by combining the first letters of Katoh and Osanai. Before founding the company, Katoh ran a nightclub. Osanai, a Tokyo University graduate and noted accordionist, regularly performed at Katoh's club accompanied by a Wurlitzer Sideman rhythm machine. Unsatisfied with the rhythm machine, Osanai convinced Katoh to finance his efforts to build a better one.[1]

The company's first product, released in 1963, was an electro-mechanical rhythm device called the Disc Rotary Electric Auto Rhythm machine Donca matic DA-20. The name "Donca" was an onomatopoeic reference to the sound the rhythm machine made. Buoyed by the success of the DA-20, Keio released a solid-state version of the Rhythm machine, the Donca matic DE-20, in 1966.

In 1967, Katoh was approached by Fumio Mieda, an engineer who wanted to build keyboards. Impressed with Mieda's enthusiasm, Katoh asked him to build a prototype and 18 months later Mieda returned with a programmable organ. Keio sold the organ under the name KORG, created by using the first letter of each founder's name plus "RG" from their planned emphasis on products targeted for the organ market (emphasizing the letters R and G in the word "organ").[1]

Keio's organ products were successful throughout the late 1960s and early 1970s but, concerned about the competition from other big organ manufacturers, Katoh decided to use the organ technology to build a keyboard for the then-niche synthesizer market. Keio's first synthesizer, the miniKORG, was thus released in 1973.

During the 1970s, Korg's synthesizer line was divided into instruments for the hobbyist, and large expensive patchable instruments such as the PS series. In the early '80s, Korg branched out into the digital piano category.

Korg is credited with a number of innovations and landmark products. The "key transpose" function was Katoh's idea after a singer at his club needed her accompaniment played in a lower key, which the accompanist wasn't accomplished enough to do. Korg was the first company to feature effects on a synthesizer, and the first to use a "sample + synthesis" sound design. The M1 workstation, released in 1988, sold over 250,000 units, making it the bestselling synthesizer ever at that time.[1]

In 1989, Korg recruited the design team from Sequential Circuits just as they were relieved of their duties by then-Sequential owner Yamaha. Yamaha Corporation has always been a major partner of Korg, supplying them with circuitry and mechanical parts. In 1987, shortly before the release of the M1 Music Workstation, Yamaha acquired a controlling interest in Korg's stock. The takeover of the company was amicable, with Katoh drawing up the terms, and the two companies continued to independently develop their product lines and compete in the marketplace. After 5 very successful years, Katoh had enough money to rebuy most of the Yamaha share back in 1993.

In 1992, Korg acquired Vox, then primarily a manufacturer of guitar amplifiers.[2] Korg was also the exclusive distributor of Marshall Amplification product in the U.S.A. for decades, with this distribution arrangement ending in 2010.[3] 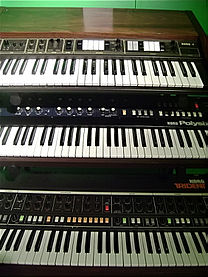