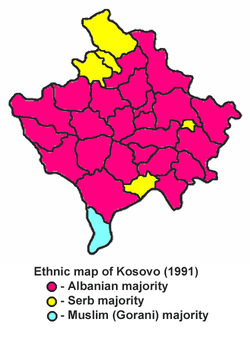 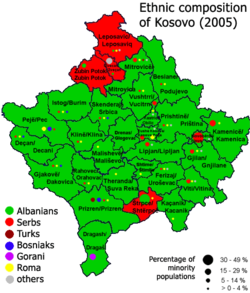 Albanians in Kosovo in 2005 according to the Organization for Security and Co-operation in Europe. 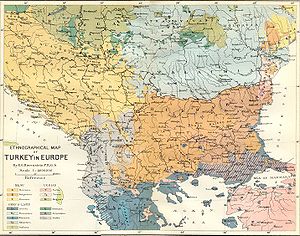 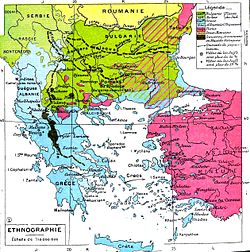 Ethnic composition of the Balkans according to the Atlas Général Vidal-Lablache, Librairie Armand Colin, Paris, 1898. 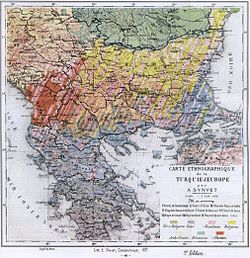 Ethnic composition map of the Balkans by the pro-Greek[8] A. Synvet of 1877, a French professor of the Ottoman Lyceum of Constantinople.
File:Distribution of Races on the Balkans in 1922 Hammond.png
Ethnographic map of the Balkans and west Asia Minor in 1922, C.S. Hammond & Co. Distribution of Races in the Balkan Peninsula and Asia Minor in 1923, William R. Shepherd Atlas

The Albanian presence in Kosovo and in the adjacent Toplica and Morava regions is recorded since the medieval period.[9][10] As the Serbs expelled a large number of Albanians from the wider Toplica and Morava regions in southern Serbia, which the Congress of Berlin of 1878 had given to the Belgrade Principality, a large number of them settled in Kosovo.[11] In Kosovo they and their descendants are known as muhaxher (meaning the exiled, from the Arabic muhajir)[11] and some bear the surname Muhaxheri or most others the village name of origin.[12] During the late Ottoman period, ethno-national Albanian identity as expressed in contemporary times did not exist amongst the wider Kosovo Albanian-speaking population.[13] Instead collective identities were based upon either socio-professional, socio-economic, regional, or religious identities and sometimes relations between Muslim and Christian Albanians were tense.[13]

As a reaction against the Congress of Berlin, which had given some Albanian-populated territories to Serbia and Montenegro, Albanians, mostly from Kosovo, formed the League of Prizren in Prizren in June 1878. Hundreds of Albanian leaders gathered in Prizren and opposed the Serbian and Montenegrin jurisdiction. Serbia complained to the Western Powers that the promised territories were not being held because the Ottomans were hesitating to do that. Western Powers put pressure to the Ottomans and in 1881, the Ottoman Army started the fighting against Albanians. The Prizren League created a Provisional Government with a President, Prime Minister (Ymer Prizreni) and Ministries of War (Sylejman Vokshi) and Foreign Ministry (Abdyl Frashëri). After three years of war, the Albanians were defeated. Many of the leaders were executed and imprisoned. In 1910, an Albanian uprising spread from Pristina and lasted until the Ottoman Sultan's visit to Kosovo in June 1911. The aim of the League of Prizren was to unite the four Albanian-inhabited Vilayets by merging the majority of Albanian inhabitants within the Ottoman Empire into one Albanian vilayet. However at that time Serbs consisted about 25%[14] of the whole Vilayet of Kosovo's overall population and were opposing the Albanian aims along with Turks and other Slavs in Kosovo, which prevented the Albanian movements from establishing their rule over Kosovo.

In 1912 during the Balkan Wars, most of Eastern Kosovo was taken by the Kingdom of Serbia, while the Kingdom of Montenegro took Western Kosovo, which a majority of its inhabitants call "The Plateau of Dukagjin" (Rrafsh i Dukagjinit) and the Serbs call Metohija (Метохија), a Greek word meant for the landed dependencies of a monastery. Colonist Serb families moved into Kosovo, while the Albanian population was decreased. As a result, the proportion of Albanians in Kosovo declined from 75 percent[14][15] at the time of the invasion to slightly more than 65%[15] percent by 1941.

The 1918–1929 period under the Kingdom of the Serbs, Croats and Slovenes was a time of persecution of the Kosovar Albanians. Kosovo was split into four counties—three being a part of official Serbia: Zvečan, Kosovo and southern Metohija; and one in Montenegro: northern Metohija. However, the new administration system since 26 April 1922 split Kosovo among three Regions in the Kingdom: Kosovo, Rascia and Zeta.

After the Axis invasion, the greater part of Kosovo became a part of Italian-controlled Fascist Albania, and a smaller, Eastern part by the Nazi-Fascist Tsardom of Bulgaria and Nazi German-occupied Kingdom of Serbia. Since the Albanian Fascist political leadership had decided in the Conference of Bujan that Kosovo would remain a part of Albania they started expelling the Serbian and Montenegrin settlers "who had arrived in the 1920s and 1930s".[16] Prior to the surrender of Fascist Italy in 1943, the German forces took over direct control of the region. After numerous Serbian and Yugoslav Partisans uprisings, Kosovo was liberated after 1944 with the help of the Albanian partisans of the Comintern, and became a province of Serbia within the Democratic Federal Yugoslavia.

The Province of Kosovo and Metohija was formed in 1946 as an autonomous region to placate its regional Albanian population within the People's Republic of Serbia as a member of the Federal People's Republic of Yugoslavia under the leadership of the former Partisan leader, Josip Broz Tito, but with no factual autonomy. This was the first time Kosovo came to exist with its present boundaries. After the Yugoslavia's name changed to the Socialist Federal Republic of Yugoslavia and Serbia's to the Socialist Republic of Serbia in 1953, the Autonomous Region of Kosovo and gained inner autonomy in the 1960s.

In the 1974 constitution, the Socialist Autonomous Province of Kosovo's government received higher powers, including the highest governmental titles—President and Premier and a seat in the Federal Presidency, which made it a de facto Socialist Republic within the Federation, but remaining as a Socialist Autonomous Region within the Socialist Republic of Serbia. Serbo-Croat and Albanian were defined official on the provincial level marking the two largest linguistic Kosovan groups: Serbs and Albanians. The word Metohija was also removed from the title in 1974 leaving the simple short form, Kosovo.

In the 1970s, an Albanian nationalist movement pursued full recognition of the Province of Kosovo as another Republic within the Federation, while the most extreme elements aimed for full-scale independence. Tito's government dealt with the situation swiftly, but only giving it a temporary solution.

In 1981 the Kosovar Albanian students organised protests seeking that Kosovo become a republic within Yugoslavia. Those protests were harshly contained by the centralist Yugoslav government. In 1986, the Serbian Academy of Sciences and Arts (SANU) was working on a document, which later would be known as the SANU Memorandum. An unfinished edition was filtered to the press. In the essay, SANU portrayed the Serbian people as a victim and called for the revival of Serb nationalism, using both true and exaggerated facts for propaganda. During this time, Slobodan Milošević rose to power in the League of the Socialists of Serbia.

Soon afterwards, as approved by the Assembly in 1990, the autonomy of Kosovo was revoked, and the pre-1974 status reinstated. Milošević, however, did not remove Kosovo's seat from the Federal Presidency, but he installed his own supporters in that seat, so he could gain power in the Federal government. After Slovenia's secession from Yugoslavia in 1991, Milošević used the seat to obtain dominance over the Federal government, outvoting his opponents.

Many Albanians organized a peaceful active resistance movement, following the job losses suffered by some of them, while other, more radical and nationalistic oriented Albanians, started violent purges of the non-Albanian residents of Kosovo.

On July 2, 1990, an unconstitutional[citation needed] Albanian parliament declared Kosovo an independent country, although this was not recognized by the Government since the Albanians refused to register themselves as legal citizens of Yugoslavia. In September of that year, the Albanian parliament, meeting in secrecy in the town of Kačanik, adopted the Constitution of the Republic of Kosovo. Two years later, in 1992, the Parliament organized a referendum, which was observed by international organisations, but was not recognized internationally because of a lot of irregularities[clarification needed]. With an 80% turnout, 98% voted for Kosovo to be independent. The non-Albanian population refused to vote since they considered the referendum to be illegal. In the early nineties, Albanians organised a parallel state system and a parallel system of education and healthcare, among other things, Albanians organized and trained, with the help of some European countries, the army of the self-declared Kosovo republic called the Kosovo Liberation Army (KLA). With the events in Bosnia and Croatia coming to an end, the Yugoslav government started relocating Serbian refugees from Croatia and Bosnia to Kosovo. The OVK managed to re-relocate Serbian refugees back to Serbia.[citation needed].

After the Dayton Agreement in 1995, a guerilla force calling itself the Kosovo Liberation Army, started to operate in Kosovo, although there are speculations that they may have started as early as 1992. Serbian paramilitary forces committed war crimes in Kosovo, although the Serbian government claims that the army was only going after suspected Albanian terrorists. This triggered a 78-day NATO campaign in 1999. The Albanian Kosovar KLA played a major role not only in reconnaissance missions for the NATO, but in sabotaging of the Serbian Army as well.

International negotiations began in 2006 to determine the final status of Kosovo, as envisaged under UN Security Council Resolution 1244, which ended the Kosovo conflict of 1999. While Serbia's continued sovereignty over Kosovo is recognised by much of the international community, a clear majority of Kosovo's population prefers independence. The UN-backed talks, led by UN Special Envoy Martti Ahtisaari, began in February 2006. While progress was made on technical matters, both parties remained diametrically opposed on the question of status itself.[17] In February 2007, Ahtisaari delivered a draft status settlement proposal to leaders in Belgrade and Pristina, the basis for a draft UN Security Council Resolution that proposes 'supervised independence' for the province. As of early July 2007 the draft resolution, which is backed by the United States, United Kingdom and other European members of the United Nations Security Council, had been rewritten four times to try to accommodate Russian concerns that such a resolution would undermine the principle of state sovereignty.[18] Russia, which holds a veto in the Security Council as one of five permanent members, has stated that it will not support any resolution that is not acceptable to both Belgrade and Pristina.[19] 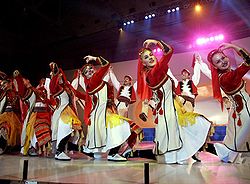 The most widespread religion among Albanians in Kosovo is Islam (mostly Sunni. The other religion Kosovar Albanians practice is Roman Catholicism). Culturally, Albanians in Kosovo are very closely related to Albanians in Albania. Traditions and customs differ even from town to town in Kosovo itself. The spoken dialect is Gheg, typical of northern Albanians. The language of state institutions, education, books, media and newspapers is the standard dialect of Albanian, which is closer to the Tosk dialect.

Education is provided for all levels, primary, secondary, and university degrees. University of Pristina is the public university of Kosovo, with several faculties and majors. The National Library (Alb: Bibloteka Kombëtare) is the main and the largest library in Kosovo, located in the centre of Pristina. There are many other private universities, among them American University in Kosovo (AUK), etc., and many secondary schools and colleges such as Mehmet Akif College.

Kosovafilmi is the film industry, which releases movies in Albanian, created by Kosovar Albanian movie-makers.

The National Theatre of Kosovo (Alb: Teatri Kombëtar i Kosovës) is the main theatre where plays are shown regularly by Albanian and international artists.

Music has always been part of Albanian culture. Although in Kosovo music is diverse (as it was mixed with the cultures of different regimes dominating Kosovo), authentic Albanian music does still exist. It is characterized by use of çiftelia (an authentic Albanian instrument), mandolina, mandola and percussion.

Folk music is very popular in Kosovo. There are many folk singers and ensembles.

There are some notable music festivals in Kosovo:

Kosovo Radiotelevisions like RTK, 21 and KTV have their musical charts.