From Infogalactic: the planetary knowledge core
Jump to: navigation, search
Not to be confused with Ottoman Kosovo.

The Vilayet of Kosovo (Ottoman Turkish: ولايت قوصوه, Vilâyet-i Kosova‎;[4] Turkish: Kosova Vilayeti; Albanian: Vilajeti i Kosovës; Macedonian: Косовски вилает, Kosovski vilaet; Serbian: Косовски вилајет, Kosovski vilajet) was a first-level administrative division (vilayet) of the Ottoman Empire in the Balkan Peninsula which included the current territory of Kosovo and the western part of the Republic of Macedonia. The areas today comprising Sandžak (Raška) region of Serbia and Montenegro, although de jure under Ottoman control, were in fact under Austro- Hungarian occupation from 1878 until 1909, as provided under Article 25 of the Treaty of Berlin.[5] Uskub (Skopje) functioned as the capital of the province and the mid way point between Constantinople and its European provinces. Uskub's population of 32,000 made it the largest city in the province, followed by Prizren, also numbering at 30,000.

The Vilayet stood as a microcosm of Ottoman society; incorporated within its boundaries were diverse groups of peoples and religions: Albanians, Serbs, Bosniaks; Muslims and Christians, both Orthodox and Catholic. The province was renowned for its craftsmen and important cities such as İpek (today's Peć, Albanian: Peja), where distinct Ottoman architecture and public baths were erected, some of which can still be seen today. The birthplace of the Albanian national identity was first articulated in Prizren, by the League of Prizren members in 1878.

As a result, firstly of the Treaty of San Stefano in 1878, then of the modified Treaty of Berlin the same year which split the Ottoman Empire, Kosovo became the first line of defense for the Ottoman Empire, with large garrisons of Ottoman troops being stationed in the province. Before the First Balkan War in 1912, the province's shape and location denied Serbia and Montenegro a common land border. After the war, the major part of the vilayet was divided between Montenegro and Serbia. These borders were all ratified at the Treaty of London in 1913.[6] The Ottoman Empire finally recognised the new borders following a peace deal with the Kingdom of Serbia on March 14, 1914.[citation needed]

Kosovo encompassed the Sandžak region cutting into present-day Central Serbia and Montenegro along with the Kukës[citation needed] municipality and surrounding region in present-day northern Albania. Between 1881 and 1912 (its final chapter), it was internally expanded to include other regions of present-day Republic of Macedonia, including larger urban settlements such as Štip (İştip), Kumanovo (Kumanova) and Kratovo (Kratova) (see map). 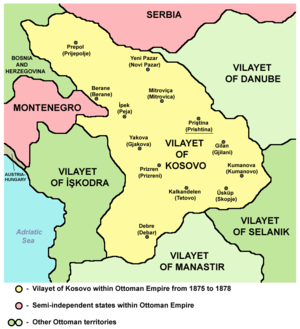 The vilayet of Kosovo was created in 1877, and consisted of a much larger area than modern Kosovo, as it also included the sanjak of Novi Pazar, the sanjak of Nis (until 1878), the region around Plav and Gusinje as well as the Dibra region.[8] These regions had belonged to the eyalet of Nis, the eyalet of Skopje and, after 1865, the Danube Vilayet. In 1868 the Vilayet of Prizren was created with the sanjaks of Prizren, Dibra, Skopje and Nis, but it ceased to exist in 1877.[8]

In 1878, the League of Prizren was created by Albanians from four vilayets including the Vilayet of Kosovo. The League's purpose was to resist Ottoman rule and incursions by the newly emerging Balkan nations.

The Kumanovo Uprising took place in early 1878 organized by an assembly of chiefs of the districts (Ottoman kaza) of Kumanovo, Kriva Palanka and Kratovo in the Vilayet of Kosovo (in modern-day northern Republic of Macedonia) seeking to liberate the region from the hands of the Ottoman Empire and unify it with the Principality of Serbia, which was at war with the Ottomans at that time. With the Serbian Army's liberation of Niš (11 January 1878) and Vranje (31 January 1878), the rebellion had been activated during the latter event with guerrilla fighting. The rebels received secret aid from the Serbian government, though the uprising only lasted four months, until its suppression by the Ottomans.

The province's boundaries shifted as the Ottoman Empire lost territory to neighboring states in the Treaty of Berlin following the Russo-Turkish War of 1877–1878 and parts were also internally transferred to Monastir Vilayet and from Salonica Vilayet. In 1878, the Sanjak of Novi Pazar, a subdivision of the Province of Kosovo, fell under Austro-Hungarian occupation in accord with the Berlin treaty which also allowed the Austro-Hungarian occupation of Bosnia and Herzegovina (remaining as such until 1908).

The Brsjak Revolt broke out in 1880–81, which ended in Ottoman victory.

In 1910, an Albanian-organised insurrection broke out in Pristina and soon spread to the entire vilayet of Kosovo, lasting for three months. The Ottoman sultan visited Kosovo in June 1911 during peace settlement talks covering all Albanian-inhabited areas.

There have been a number of estimates about the ethnicity and religious affiliation of the population of the heterogeneous province.

An Austrian statistics published in 1899 estimated:[9]

According to Ottoman yearbooks, in 1901, the Kosovo vilayet which encompassed five sanjaks: Skopje, Priština, Prizren, Novi Pazar, and Pljevlja had 964,657 inhabitants; two thirds were Muslims and one third was Christian. The Muslims were primarily Albanians and the Christians were mostly Serbs. The yearbooks, however, are deemed unreliable sources as they, in some districts, did not register the female population, but balanced the numbers against the male population, though it is a well known fact that the number of male heads exceeded the number of female heads throughout this period not only in those lands but in Serbia Proper as well.[10]

British journalist H. Brailsford estimated in 1906[11][full citation needed] that two-thirds of the population of Kosovo was Albanian and one-third Serbian. The most populous western districts of Đakovica and Peć were said to have between 20,000 and 25,000 Albanian households, as against some 5,000 Serbian ones. A map of Alfred Stead,[12] published in 1909, shows that similar numbers of Serbs and Albanians were living in the territory.

A publication from December 21, 1912 in the Belgian magazine Ons Volk Ontwaakt (Our Nation Awakes) estimated 827,100 inhabitants:[13]

The governors (Vali) of the province were:[citation needed]